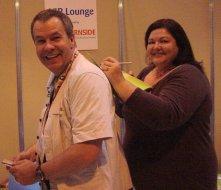 Just back from the NEC again, having decided on another 'investment' in time and money to further the cause.

Fortunately, it proved well worth it.

Having 'done' the Recycling Expo on Tuesday, we decided to focus more on the Direct Mail and Incentives Show next door. Usually this is a rather depressing task for any of an environemental disposition, as there is a staggering amount of wasted resource and utter tat that gets consumed in these affairs.

However there were some glimmers of light, literally, with as an example a company promoting wind up stuff like torches, which was a bit more like it. Sadly the unit costs (at several ££) are still pretty much out of our range for Junkk.com's purposes, though we may consider a batch as bigger prizes.

Getting closer to our budget were several arboreal incentives, including a tree in a tube, seeds imbedded in a card (you don't reycle, you compost and end up with a plant) and even a cactus in a keyring. So far, so alliterative.

The problem is we're free, so paying people to register is a rather expensive business model.

However we did quite well for meeting some good folks, and got called over to the recycling show a few times. Penney Poyzer had returned for a book signing, so we now have a copy of hers (review to follow), with a nice quote for the site which she inscribed on the cover. We'll stick it on the site, most likely under testamonials. She also got to see my 'works in progress' on the rucksack and the extension chord from the old vacuum cleaner I found, and seemed suitably bemused.

These party pieces also came out again when we were kindly introduced by the MRW PR team to a BBC producer, with whom we chatted for a long time. He has a show in production using eco-gurus (I had heard of a couple, but they're not 'celebrities' as such) who are subjected to surviving off the waste. Can't say I envy them that task, but it does sound interesting and quite close to what we're up to. I doubt they'll have access to a laptop and net connection to source or upload Junkk.com ideas though. He didn't mention the name but we'll be keeping our eyes open!

We got there in an hour door to door. Same back. It is a sad fact that to do that any other way than car was not an option, either in terms of time or financially.
Posted by Peter at 5:41 pm No comments: