Couldn't resist. Credit the Green Party (well, at least one of their 'principal speakers') for this: IF BLAIR COULDN'T CUT UK'S EMISSIONS IN 10 YEARS, WHAT HOPE THE WORLD'S?

Green Party Principal Speak Dr. Derek Wall today labelled Tony Blair
as "no friend of the earth", and attacked the former Prime Minister's
"woeful record" on carbon emissions reduction in the decade he was
Prime Minister of the UK, questioning whether he is the right man to
lead the new global initiative to tackle climate change by cutting the
world's emissions.

Dr. Wall highlighted the fact that despite 3 manifesto pledges to
decrease emissions to 20% of 1990 levels by 2010, a year before Tony
Blair resigned as Prime Minister in 2007 the UKs carbon dioxide
emissions were the highest they have ever been under Labour - 2.2%
above 1997 levels. To be on track to meet the 2010 target, emissions
should have been around 10% lower than 1997 levels by then.

"Tony Blair is an insane choice for climate change czar. His woeful
record in 10 years of Government saw an expansion of CO2 levels and a
criminal neglect of renewable and sustainable energy policies in
favour of more roads, more carbon intensive international trade and a
dangerous new nuclear energy programme.

"His first call should be for an end to the expansion of Heathrow and
short haul flights, a stop to the investment and promotion of
agrofuels, and a greater emphasis on renewable energy production.

"Blair is trying to create a niche in international environmental
negotiations based on an appalling record of disregard for the cause
of climate change.

"Tony Blair is no friend of the earth and everyone knows this."

I merely re-iterate my very small drum banging on the choice of messengers for such critical messages as those that will require 'selling' to the the voting public in times to come. I am afraid that anything inspired by TB on matters enviro is tainted from the off.

ENN - Britain's Blair takes on climate change - Or, cut and pasting it another way...

If ever there was a messenger who has all the heft of a lifetime of having done what he says, for the tricky task of bringing others (not yet so secure in the post-needing votes, mega-$ book tour thing) round to doing things that may not be so palatable to career, profit, economy...

That's the name of a Gov white paper published yesterday as reported in Latest Science News.

As I read this piece I was smiling, thinking to myself, this is another initiative launch which will achieve nothing other than create another raft of gilt edged pensioned quango jobs. It seems like I'm not the only only to look upon the announcement with more than a hint of sarcasm. This from The Register makes for hilarious reading. 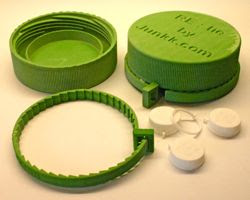 The ECOPACK '08 show at which Junkk.com exhibited and I was a speaker ended yesterday afternoon.

I intend to do a re:view, but frankly I am still struggling to get my head around where to start and on what since getting back in the wee small hours of last night.

I am just grabbing a breather between catching up on the 1000 emails in my in box in just 3 days (not a single spam, but mostly newsletters and press releases, and hence postponable, if not ignorable, but still requiring a lot of sifting for actual gold). Plus all the follow-up from the show, plus getting the stand out the car and stowed neatly for the next.

Oh, and a bunch of stuff on Junkk.com.

I really don't know where to start. But RE:tie must take priority, as this looks like our best shot at income, and if we can get a stream then we can look at getting in a few more bodies to help run this show, which is in danger of drowning in its own success by failing to serve the needs of all those who are interested in being a part, as either a user or business.

So before dashing back to all the priorities above and beyond this blog, I need to make a few thank-you's.

To Peter, a vastly expereinced F&B/FMCG marketing and sales guru who is keen to help me make RE:tie and Junkk.com realise their commercial potential, and who came to help me man the stand on both days even though he is is still just trying to understand the business enough to see if he can add value as our commercial front man. I truly hope that your belief will be more than rewarded. If the comments we had during the last two days are anything to go on, I trust you feel it will be.

To Frank and his team at BCU, who delivered the protoptypes (pictured - including a large demo version) in the nick of time, and without which we'd have been struggling to get the concept of the RE:tie across to the passing audiences. If a picture is worth a 1000 words, being able to take a cap off a bottle, peel a RE:tie off a cap, and then tie-up a bin-liner with it was about as clear a demo of the concept as one could have hoped.

And then there's all the nice folk who couldn't come to the show but wished us well, and especially those who did come to the stand and my seminar talks, and said such nice things about what we're trying to do and... more importantly... encouraged us that we look set to succeed in doing well with our site and the invention we're trying to market, that is the first real commercial embodiment of the Junkk.com philosophy of reuse in packaging, and preferably designed-in!

Oh, and Dave of Solarventi, who has kept this blog, and hence the Junkk.com front page, ticking over while I have been AWOL. And, as it transpires, may well be for a while yet as I look into the in-tray!
Posted by Peter at 12:53 pm No comments:

In a world where grain prices are rising rapidly due to shortages and the agricultural move towards growing crops for bio-fuels, and where the threat of climate change seems likely to make crop growing even more of a risk, the last thing mankind needs is a new disease strain to threaten one of our basic foodstuffs.

Unfortunately, as this from The Telegraph reports, that is exactly what we have. UG99 is a strain of stem rust that can reduce wheat yields by 40% to 70% and has already spread far faster than scientists expected.

The only saving grace for us in Europe is that it is believed that Europe is too cold for UG99 to survive. But with the onset of climate change?

.... he keeps bouncing back into the picture. Who, you ask? The one and only Tony Blair, until recently our PM for some 10 years, during which he did absolutely sweet fanny adams about climate change.

So what's he up to now? He's morphed into a bright green eco friendly Environmental Flash Gordon and he's going to save the planet. Yes it's true, it's reported in Reuters and in The Guardian.

"The fact of the matter is that if we do not take substantial action over the next two years, then by 2020 we will thinking seriously about adaptation rather than prevention."

This from the man who achieved nothing (well, OK, you're right, there was lots of spin, hot air, empty promises, commitments [not met], targets set [and neatly avoided] etc. etc.) to alleviate climate change whilst in power. I despair.
Posted by Dave at 10:15 am No comments:

Tax hikes behind a green smokescreen

Having read reams of analysis since the budget on Wednesday, I have to say that I was left with a feeling that we had just had a talk by the Chief Steward on the Titanic about re-arranging the deck chairs, yet again.

This article by the British Retail Consortium from TheRetailBulletin is just about the most concise and informative summary I have come across. The term 'green smokescreen' just about sums it up perfectly, don't you think?
Posted by Dave at 9:53 am No comments: