Reaction is probably the best form of complement 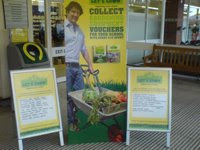 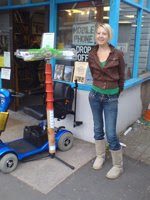 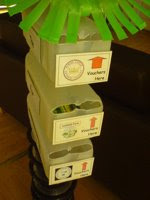 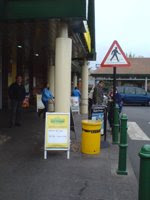 News from the "Voucher Tree" front.

We've made two, and they are in two local locations: Terry's Digital and the EnviroAbility Book Swap shop.

The PR has been picked up quite well, with local papers the Ross Gazette and Hereford Journal, and local radio BBC H&W (we think - they interviewed me for sure, but the advised date for airing keeps moving) and WyvernFM (on air and online - we'll try and get MP3s of both stations) being most supportive. It was gratifying to find hard-bitten press folk not seeing a down side to what we are trying to do.

And two more primaries, Weston-under-Penyard and Kings Caple, have asked for a 'coconut' to be added, which has been done.

Though Morrisons has yet to get back to us, we have noticed that in the last few days, if oddly well into the promotion, some 'A frames' have been put in the foyer to advise which schools have signed up. Better than nothing for sure. Shame no invitation to add a tree (or tell us they were doing this, as we could have added it to the PR), but we'd like to think our efforts may have inspired them a bit. That a sister store in the nearby city, Hereford, has only a few schools mentioned to the big list we have in Ross (like, by a factor of 10), would suggest a lot of local interest... for some reason. Still seems a pity not to just get the vouchers from till to tree in one shot.

And we've just been told of an ASDA promo around now that is very similar.

All in a good cause! As is said: 'Every little bit helps', if you know what I mean.
Posted by Peter at 11:59 am No comments: