I'd already posted on this baby, but in reviewing the posts (a lot, but some good ones, so I broke my 'no more than 100' rule) I found I might have been hasty in my critique of our reaching for the stars efforts. Well, at least the punting rich geezers up there bit , anyway.

As there are some here who seem to know, I would like to tap into the collective intellectual resource being brought to bear to help me with a question.

For a while I have been perhaps a tad less than fair to one Mr. R Branson in having doubts on his claimed green campaigns - towing planes to take-off (did that ever happen?), biofuel-powered planes (could that ever happen?) and £25M eco-prizes (does that include waiving the rights to profit sharing?) - especially when one of his highest profile current extravaganzas seems to be sending rich tourists into space atop what I had thought to be a massive column of greenhouse gasses.

Now it seems that I may have been unjust, and it's all 'just' (I have to presume there's a smidge of energy in the production, and possibly a tad of pollution still involved in the combustion) oxygen and hydrogen, though I also do recall steam to be considered a greenhouse gas.

We have a most helpful earlier offering as regards Ariane, but can anyone enlighten me as to what other space borne efforts, including Virgin Galactic, actually do consume and exhaust?

One of the (many) frustrations of a moderated system is that Qs can cross with As, and debates can get a tad jumbled. A classic of the former has just happened here, and I pretty much got my answer in an overlap. Fortunately, it seems my usual admittance of bozoness, combined with a quest for answers, was not far off the right track. Unless this latest guy is wrong, I guess. He doesn't sound like he would be, though.

Not convinced: Powerboat plan to go round world in 65 ecofriendly days

'Course, not using any combustible fuel at all and sailing using
no-emission wind power is perhaps a tad more eco-friendlier still -
if you are sincere in trying to make some point about saving the
planet, and not just scoring a few greenwash points and column inches
whilst having a hell of a jolly.
Posted by Peter at 1:13 pm No comments:

Meanwhile, our elected representatives continue to lead by example...

I'm not sure, but the likes of Jeremy Clarkson and Dubya must be allowing themselves a small sherry and a snicker about now.

This is what it looks like online: Organic move to cut food flights

I don't know if it was/is a SlowNewD, but what I saw on the TV screen seemed a tad less calm. In fact more knickers seemed to be getting twisted than a tornado passing through the Ladies' Unmentionables Department at your local M&S.

And, as always, I think the consumer, closely associated by the planet, looks to be coming out of this dazed, confused and a lot worse off. But at least the ratings are going to be healthy, so there are some winners.

So far I have seen a succession of green interest groups, with a few others from the pro-Bono end of feeding the world/poor lobbed/ing in for good measure, pretty much knocking spots off each other as to who is more worthy, and why their cause is better than someone else's. All on a nice salary and pension no doubt. I never knew there were so many spokespersons for things 'I'm not quite sure what they actually do' around.

I just hope that out of all this furore in a Fairtrade coffee cup there may be a result that has a good enviROI. Just because it has come from another country doesn't mean it has cost the planet as much, as force rearing artificially here can be worse. And the packaging may mean it gets consumed rather than consumer-unacceptable quality material simply gets ditched.

Of course, what I don't seem to have heard to much is the odd notion of us not expecting to have it all, all the time, on demand. And though I am usually pretty pro-choice and pro-consumer, for a retail spokesperson to say they have to do it to meet consumer demand is a tad disingenuous.

Indy - Dominic Lawson: A lesson in how to dig yourself into a hole


Thank you for this piece. Most thought-provoking.

I have a saying, which I have used so long I may have actually nicked it and forgotten I had: 'Nothing that is green can be viewed only in black and white'.

Sadly we seem to be moving into a ever more complex eco-areas, but those who can and should know a lot better (including some in the media) are in my view making matters (In assessing eco-value I tend to apply my own measure on most things: the enviROI, or return on investment to the environment, which I admit is in itself is simplistic by being more concerned with immediate climate change impacts than social costs) a lot worse by applying some very hasty, poorly-considered cookie-cutter initiatives for more than dubious reasons.

I am in particular vexed by what I see these days in the arena of all things 're', with meeting targets and paying out bonuses as a consequence often taking precedence over actually doing any good.

I would like to think we could afford a few brief moments to take a breath and think through some hugely expensive, often woefully negatively impactful and almost inevitably uncancelable endeavors before leaping into them. And asking what exactly we, and the plant are actually get for the vast sums that seem to be paid to those who would claim to be qualified to manage this on our behalves, often with almost no real accountability.

Mirror, mirror, pure and clean; just like my image if I'm Green.

How Green is Blair?

I managed to miss this episode, both live and in the next day online follow-up. Which is frustrating, and also renders me ill-equipped to comment in an informed manner. But as this hasn't stopped most media much these days, here goes.

Noting that now ex-Ethical man a few posts over has managed to generate in excess of 100 replies (to not too many here, bearing in mind this is discussing the enviro-record of the guy who has overseen our green performance for the last decade, and set much that is yet to happen in place) to support his justifications for getting back on air again, as it is relevant I would like to offer one opinion.

In asking 'How Green is Blair', or indeed any person who would seek to tell us how to take on this colourful hue, surely a major factor must be in looking at what they say vs. what they do.

In the case of Mr. Blair the politician, I am presuming the story I missed laid bare his record. I'm sure it was illuminating, and his explanations hand-wringingly sincere and 'adept' at satisfying his and the news media's agendas.

However, I am still trying to reconcile how anyone who doesn't seem to feel what he 'needs' to do (for instance, the global lecture circuit - to pay for a lifestyle choice he and his family seem to enjoy and seek to maintain) as it 'isn't practical not to', is different and exclusive to what the rest of us are facing.

I am prepared to be lead by visionaries, but only those who can also do so by example. Otherwise, they can go fish.
Posted by Peter at 8:34 am 1 comment:

I used to be ethical, but now I'm not it's all ok

Has flying been unfairly demonised?

So I watched the cause of reduction being simply being played with for a year, and then figuratively as well as literally get dropped into the bin at the end.

Now, having waded through a lot of interesting, useful, worrying and frankly gob-smackingingly scary stuff here, I think the most potentially damaging thing to the environment I have read is in the original post: '...now that I’m not Ethical Man'.

You can do a lot more damage from within. Ask any Trojan.

Hope the ratings were worth it.
Posted by Peter at 8:17 am No comments: 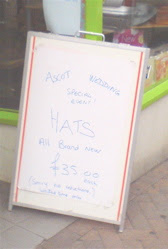 It must often seem I have a bit of a 'thing' about charities.

Ignoring for now the value they have as a complementary source for social good, they certainly also provide an incredible re:use function as well.

And when done well, on both counts, I am here to applaud and support. For instance, as mentioned before, by trying to figure how to use Junkk.com to divert the much dreaded plastic bag for where it is not wanted... to where it seems it is. That first poster is asking for your old, clean bags!

However, I also feel they can get it wrong, and the other poster is an illustration. I was actually directed to it by an old lady neighbour, who was not impressed. I have to agree. It's bad enough them getting to compete unfairly with rate-paying retailers selling new goods at cut prices, (my view is that they should be re-selling nifty second hand bargains alone), but the symbolism of selling 'brand new hats for Ascot' just didn't sit right.

I think they can find a niche in our consumer sector, and it need not be restricted to a grubby one, but not in this way, with such luxury goods possibly made for the purpose and competing with a nearby haberdasher struggling to compete in a harsh climate.
Posted by Peter at 6:45 am No comments: