I leapt into dangerous waters, regarding a sacred, cash cow.

I come into London a fair bit (some of us have to, lugging stuff, ironically in my case to share the joys of saving the planet).

For those of us juggling our finances, an electric or hybrid is looking a pretty good idea (except for the lugging bit), which seems the intention.

So if I am rich enough to have a 4x4/biggie (ignoring those, for instance growing our 'buy local' crops who may not be, and who don't live in London. Or have an old car), forget the train, I simply buy myself another (5-25% of total eco-cost in manufacture, depending on who you believe), to spend most of my time lugging a battery down the motorway, to buzz about for free the last few miles.

At which point it stops all day filling up space. Or can buzz about cranking out emissions (batteries do need to get charged somehow, and not that efficiently, using fossil fuels) for free.

Other than being a modest-income earner's worst nightmare, and hence sure-fire vote loser, wouldn't taxing the amount of stuff that goes in the fuel tank (regularly) in combination with what comes out the pipe (exhaust or power station - electricity comes with an e-cost) as a miles covered-fee be a) fairer and b) better for emissions control?

Or was the latter perhaps not the point?

The first casualty in a spin war is trust.

What a sad debate for the capital city of a country who accounts for a fraction of total global emmissions, and talks and gestures its way into the future, while the majority who don't have such cars get distracted from real issues and actions that can make a difference."
Posted by Peter at 12:09 pm No comments:

I've posted a couple in the Guardian today.

Both to David Miliband at the UN climate change conference: day two

"I'm trying to get a grip who is saying what, and with luck doing the same thing. Or, more likely, another.

Sorry to kick off with the Indy, but with a front page that has all the political party logos to the left and the UKIP logo and a picture of Mr. Blair - not his party - to the right (no comment) I have read this today: "David Miliband, the Environment Secretary, wants to extend the carbon trading scheme to include more businesses such as hotels and supermarkets. But Gordon Brown, the Chancellor, is resisting the idea."

But then in this fine tome I now read '...reports of a clash with the chancellor, Gordon Brown, were " ridiculous".

May I ask who thinks what, and who gets the casting vote on environmental matters in government?

And what, precisely, will this country's stance be, and the consequences to industry and the voting population.

Please can we have some tangibles, and with luck avoiding the word 'targets'.
I've watched a succession of his Ministerial eco-colleagues been given a daily 3 minutes on BBC Breakfast TV trot out waffle, and when posed questions on real-life, actions (such as VAT breaks on e-friendly home improvements), the best I've heard so far is 'it's tricky, and were looking at it'.

Hope the weather's nice there."

Second, to anyone, really

"In posting before, a little ad popped up telling me that I could save 30% on my energy bills by popping in a wind turbine. Sounds a plan. But is this so? I have also recently read (Mail on Sunday, sorry) that they may not be such a good idea, not just financially but environmentally.

Meanwhile, it seems a good idea to buy a hybrid. Only I don't live in London (some of us don't - and the nearest train station is 40 minutes way, and at 4x the fare, let's not go there here) and lugging a battery down the M4 apparently isn't too smart either.

With major political leaders advocating, and in some cases stuffing through either laws against or incentives for such things daily, and such contradictory advice either in support or against, its all a tad confusing for the poor consumer.

When are we going to see some sense talked by the political and green elites (activist and media) that don't presume we all live in a house in Putney, can all afford to offset our Perrier and jaunts to Klosters, and whack up a solar panel on the nanny flat each week?

I know there are a lot of folk out there struggling along with mortgages, kids, holiday plans, relative overseas etc, who are not only seeing a bit much on the fine or tax front that will affect the minority of those who can afford it not one jot. And precious little on the incentive front that can help those who want to do something but need help and non-agenda-driven guidance that works for them and the planet.

Speaking of which, while recycling is dead good and all, is it perhaps not getting a bit too much of the lion’s share of the target-driven culture that serves box-tickers and makes a lot of folk big money (quangos, ad agencies, local composting officer salaries/pensions, waste contractors)? A few tens of millions of folk spending a minute a day sorting out their waste is a heck of a wage bill saved. But it isn't too satisfying or anything other than emotionally rewarding on an individual level.

Reduction can be equally unattractive (but doesn't have to be). But let me pitch something that can help a tad and be both fun and rewarding: repair and reuse. Try http//:www.junkk.com for a start." 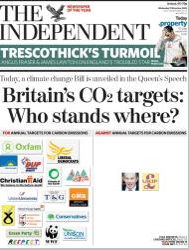 Now my eyesight isn't so good. And I know there's been a lot of monkeying about with logos lately.

But while I can see the Lib Dems and I think (worth noting to graphic designers what reads best) Tories and Greens on the left, somewhat aptly to the right is UKIP & Mr. Blair - as opposed to, one presumes, the Labour Party, our Government... guys in charge.

What an odd front page?
Posted by Peter at 9:34 am No comments:

I can't seem to get Junkk.com (me, maybe) arrested, much less mentioned as a viable part of the fight against waste.

This morning was typical. In advance of the Queen's Speech, we had a puff piece with the Minister for (something eco... How many are there now?), 'Bouffant Ben' Bradshaw showing off his vlog on how easy it is to recycle... in London.

When it came to corporate responsibilities, it was clearly stated that 'turning to legislation at every turn' is not the best way to go. Out of the mouths of Blair babes...

Moving swiftly on, it was jokingly pointed out that he actually had been caught in the very transgression of co-mingling, which in another council area would have got him... um.. a fine.

'Just show's how tricky it all is,' he guffawed. And how easy to say one thing and do another. Or be asked one thing and answer... well... differently to that required.

Apparently those who have been fined, as captured so loudly in the papers of late, they were in the minority and 'had been warned several times'. Accepted nods all round from fellow Beeb bouffant. Were they? Had they? I didn't get that impression from the last one I read. I guess we'll never know.

About the only thing I did learn was that banning plastic carriers is not going to work 'cos people just turn to paper, and that's worse environmentally. Is it?

Meanwhile, other than four soldiers getting blown apart, we'll have the skateboarding minister for tortoises on...
Posted by Peter at 9:00 am No comments: