Climate change already seems to be hitting parts of the Mediterranean very hard. Having spoken to several friends who have recently returned from holiday in various Mediterranean locations such as Greece, Sicily and Malta (lucky lot!), and having listened to all of them moaning that at 40C+ in the shade (48C in one instance!), it was just too damned hot to go out during the early afternoon, I wasn't too surprised to come across this from the International Herald Tribune which reports that the Mediterranean Sea itself may be at risk.

"temperature rises could wipe out 'up to 50 percent of the species,' the study said. The decline in the algae population measured last winter also reduced by 30 percent the sea's ability to absorb carbon dioxide"
Now that's getting scary.

And on the same day we get a story from Reuters Africa suggesting that the impact of global warming could be as devastating as nuclear war!

"The most recent international moves towards combating global warming represent a recognition ... that if the emission of greenhouse gases ... is allowed to continue unchecked, the effects will be catastrophic -- on the level of nuclear war"
That's very worrying!

Meanwhile, as reported in the Guardian yesterday, our own MOD has commissioned a study "to identify countries where battles could break out over increasingly scarce supplies of food and water, as well as predict the likely conditions in which British troops may have to fight in future". The study is attempting to identify just what the consequences of an over-populated planet undergoing significant climatic change might be, but it sounds more like significant pre-preparation for some nasty worst case future scenarios.
Now that's really filled me full of doom and gloom!
Posted by Dave at 5:48 pm No comments: 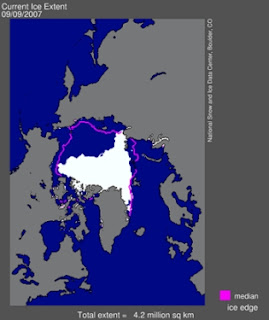 A little while back, we commented on the new record for a minimum of ice coverage across the Arctic ocean. See Arctic Ice Hits New Record Low.

With still perhaps two more weeks of melt, we may actually see the mythical North-East passage open at this rate. (The North-West passage has already been fully navigable for several weeks.)
Posted by Dave at 5:30 pm No comments:

And, dear readers, what colour will you be?

I do declare this comes on the same day I saw a BBC report on doing the limit to save the planet as well. Do I feel a campaign coming on?

As it exists I feel obligated to share, and as the link doesn't work in full. I feel unable to comment (which I may have done when this was last trumpeted) too much, save to say that, as an ex-whit van man (misspent Univeristy days), I can't help but feel an extra £1.2M might be better spent than on this black hole.

The Safe and Fuel Efficient Drivers (SAFED) scheme aims to encourage driving techniques that save fuel, thereby cutting costs and CO2 emissions. Since its launch, the Department for Transport has invested nearly £2.2million in the scheme.

The training has been immensely popular and so far the programme has trained nearly 7,800 drivers. Drivers who completed the training found they achieved an average 16% improvement in miles per gallon, giving a potential annual fuel saving of £3.3million and CO2 emissions reduction of 9,350 tonnes, equivalent to an average of £425 for each van driver and a reduction for CO2 emissions of around 1.2 tonnes.

The new money will part fund training for new instructors, new assessors and up to 6,500 drivers over the next three years.

SAFED is a one-day training course involving a mix of classroom and on-the-road tuition. It teaches drivers how techniques such as better use of gears and brakes (avoiding over-revving and unnecessary gear changes), keeping correct braking distances (not braking hard) and better road awareness (seeing junctions in good time) can improve both fuel efficiency and safety.

Fleet managers and van drivers interested in finding out how SAFED for Vans could benefit their business should visit http://www.safed.org.uk and navigate to the 'find a trainer' page, or call 0870 190 8440.

It's a question to me of enviROI. I can't fault the facts, but are they really the best wins for the money? We are talking £3.4M for 10k tonnes of CO2, assuming the figures are right (are we talking employed as well as owner drivers?), along with my maths.

SAFED was originally launched in 2006. It followed a successful pilot project that found significant financial and environmental gains could be made by using advanced driving techniques without any noticeable impact on delivery times.

A series of case studies and guides have also been published by the DfT funded Freight Best Practice programme
Posted by Peter at 4:22 pm No comments:

I almost skipped over this - NOWADAYS, IT SEEMS, YOU ARE WHAT YOU DON'T EAT. But then, I didn't.

Hardly the most representative sample, but for my discussions with others on motivating eco-friendly notions of lifestyle reductions, at the very least in terms of waste, still a nifty selection of thoughts.

I have been banging on for a while that, if everyone is so cash rich because they are so time poor, getting 'em to consume less, move less far... and slower... is going to be quite a task. No point having all that money if you can't blow it, hmnn?

Did someone mention Marx?
Posted by Peter at 3:58 pm No comments:

This from Interactive Investor reports on Tesco's £25 Million investment, in conjunction with the University of Manchester, in setting up the 'Sustainable Consumption Institute' (SCI).

The SCI has a nice aim - to "help both customers and retailers create a sustainable, greener future".

But I can't help raising an eyebrow over some of the 'projects'. E.g. "making paper from chicken feathers and fuelling delivery vans with plastic milk bottles." What???***!!!

"Tesco's chief executive Sir Terry Leahy said the Institute - one of the key elements of its climate change strategy announced in January - was further proof the company's long-term commitment to making a positive contribution to tackling environmental issues."

Well, he would say that, wouldn't he. I can't help suspecting that there's more than a little of 'keeping up with the Jones's' (or perhaps I should say Rose's?), along with a large dollop of greenwash, going on here. And I'm certain that there must be more realistic, and more genuinely planet sustainable ideas, that could be concentrated on with such a huge budget, rather than faffing about trying to make paper from chicken feathers!

Indy - Tesco funds 'green consumption' studies - Nice press release cut and paste job, guys. In light of what follows, I do share this: 'This is independent research. The industry partner has a right to talk to us about what problems it wants to have addressed, but it cannot manipulate the findings."

But I thought I'd seldom find myself agreeing with (most here from) this lady:

It's not making our job easier, is it? And what could we do (that's 'DO') with £25M? Note the action verb there. It's important in the context of her conclusion:

None of the parties are prepared to admit that accepting money from retailers to fund education and research just compromises the results.

It also goes to the defensive reaction to such critiques... If they are valid. Are such 'initiatives' helping the overall cause, when this is what can be levelled by major media commentators almost by return. Plugging sprung leaks as you still tilt full speed into icebergs is not good prioritising.

Guardian - Sustainable living, sponsored by Tesco - With soem more views. But, thanks to Dave, you heard it here fi.. er , earlier. I'm erring on the BTN end of the debate. It is a lot of dough. Just wish it went to a better cause.

And in the green corner - Bin Laden!

I missed this from The TimesOnline yesterday, reporting on Osama Bin Laden's latest video appearance on the anniversary of 9/11. A date which still makes me shudder, especially as I should have been in the World Trade Centre on the day of the attack; luckily (for me) my meeting was cancelled a few days beforehand.

Anyway, it would seem that the new Grecian 2000 enhanced version of the leader of Al-Qaeda is standing fair and square in the 'green lobby'.

"The life of all of mankind is in danger because of the global warming resulting to a large degree from the emissions of the factories of the major corporations. Yet despite that, the representative of these corporations in the White House insists on not observing the Kyoto accord".

I suppose that there's a first time for everything - I have to confess that I don't think I can recall ever agreeing with anything in a statement from an international terrorist before!

Guardian - Can we fight terrorism by reducing CO2 emissions?
Posted by Dave at 9:00 am 1 comment: