As my home for several years, I can testify that Singapore has much to offer.

Singapore slings out tradition and welcomes the bright lights of F1

This... especially at the moment, ain't one.
Posted by Peter at 2:36 pm No comments:

How to spoil a Friday

Sometimes it's good to share. This is not one of those times.

I share this not to give ammo to those would use it in defence of a rather extreme climatically optimistic view (which it will, even though it is just about reporting standards), but in the hope that the Nixonian notion of 'don't get caught' rarely applies. If you don't want your dirty laundry hung out for all to see... don't soil it.

If (it still looks in the realms of "what might be", but the Indy is not a great fan of those from a CO viewpoint and has chosen to share) this pans out as billed I must again raise my eyes to the heavens at the sheer, unprofessional ineptitude of those who are allowing personal or corporate agenda corrupt the spirit of objective information sharing.

And 'But Ch4 did it first!' won't cut it outside of my licence fee demand.

Who are these folk? How are they paid? Why? Is there ever an accounting?

Just lay all it all out honestly and let the public decide. The minute you start figuring you know better, then try and rig it, and then get caught, it just makes everything a whole lot worse to try and explain for those working along, steadily sharing what we know, what we think we know and what we don't. And then what we think might help now, just in case.

It will be interesting to see if this escalates as billed. If proven it has to. If not, then it will rumble along anyway I'm sure. But it would have never been an issue if the desire in some quarters to 'enhance the narrative' had not overcome professional standards.

For some reason, the author has posted this in the Guardian (I usually enjoy having a debate there, but on this issue it's really not worth it. I've just left one where 'they' are asking why someone who might have a different view to the group is allowed on, and to voice an opinion. Bless):

I must say it makes for an interesting read, even if some links to 'a bloke's blog' seems rather... unconvincing in support.

I must say on first reading I was unclear (great communicators that they are: 'Maybe that's our fault for not being clearer' - that's what £3.5B gets you, I guess) whether he was saying the climate debate was a done deal, or it wasn't..'...even if the scientific consensus is that global warming is a reality', '..makes clear, it is that there is still a furious debate going on out there.'

As to the rest, with bitter irony it mostly makes this committed environmental campaigner weep... or feel like buying a Hummer.
Posted by Peter at 2:26 pm No comments: 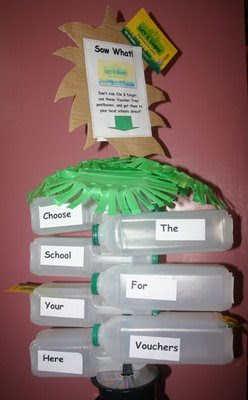 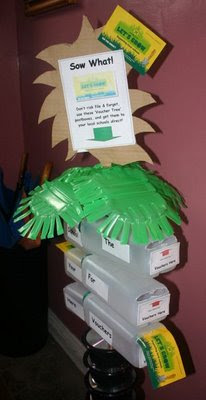 This, I hope, can be the start of something big.

Let me quote from some PR going out, which I hope will explain:

Have you got a bunch of vouchers still in your kitchen draw from some supermarket promotion that was over last year? It seems such a pity that these opportunities to get free stuff to the benefit of the local community, especially when they are our schools, often pass by without really being taken advantage of fully.

Well, a locally-organised community collaboration has been launched to try and avoid any such waste this time, and help our nearby schools too.

Shoppers in Ross may have noticed that Morrisons supermarket is running a 'Let's Grow' promo, whereby your purchases can generate free vouchers that your school can use to buy gardening equipment.

There have been many such similar schemes before, but how easy is it to pop these in you wallet at checkout and then never get them to the right person at the right school to be of use?

They will then make sure they get to the school you specify (each 'coconut' lists a local choice, plus a generic one whose contents will be divided equally) at the end of the promo.

It is very much hoped that the store itself will also soon be able to have one behind the checkout rows so it can be a simple ‘shop and pop’ in one smooth motion as you leave. But first head office approval is being sought before this will be possible.

As an interesting aside, with some experience in such charitable endeavours, Dennis Humble of EnviroAbility has advised that for some reason many customers still turn down such free vouchers even when offered at the till. Hopefully this initiative, and any publicity that may be generated, will result in higher responses through better awareness combined with more immediate and convenient ways to get the vouchers where they will do most good.

So, when you shop, remember when they ask if you'd like your vouchers – please think 'Sow What' and then come and add them to the tree.

The scheme runs until November 6th.

Now, what we're hoping is that the big guns at Head Office see opportunity staring them in the face. It's happening with or without them. With is better for all, all round.

Because... there's more sinking in:

As an interesting aside, with some experience in such charitable endeavours, Dennis has advised that for some reason many customers still turn down such free vouchers even when offered. Hopefully this initiative, and any publicity that may be generated, might result in higher responses through better awareness combined with more immediate and convenient ways to get the vouchers where they will do most good.

If it works here in Ross, it is hoped it may catch on elsewhere in the county and country and with other promos, too. Hey, it’s a free and easy way to get free and useful stuff to help the community!

If anyone wants to copy the “Voucher Tree” just go to Junkk.com and look in the 'Ideas Section'. But feel free to adapt and/or improve!
Posted by Peter at 12:47 pm No comments:

OK, this is no longer funny...

... well, of course it is, really. Hilarious frankly. But I still have this sneaking suspicion that Dilbert is using this blog for ideas.