The Good, the Bad and the... can't be bothered 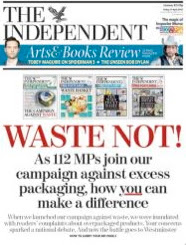 You can see a few more here.

There's money in talking about the environment, obviously.

And I now, in addition to Junkk.com have something well worth talking about, not least because it actually is a physical thing that does something, and does it less.

Yet still I face an uphill struggle to share it.

This piece in the Indy allowed me a slight venting opportunity:

Terence Blacker: Why I'm not sold on 'The Apprentice'

'Selfishness, a lack of personal accountability, a ruthless aggression towards others are, in everyday life, regarded as social problems. How odd it is that [any successful medium] suggests that they are so desirable in business [and engages in such practices itself].' My brackets.

Couldn't agree with you more.

Having been involved in a positive campaign for a years to change consumers' attitudes towards packaging, and recently winning a Gold international award for an invention to help them to improve matters, I still await any acknowledgement, recognition or support from the paper you write for.

I will put anything and anyone on my site if it helps improve the environment, even if they are technically competitive. A shame that other enterprises are not so able to share in the bigger picture, when self-interest, opportunism, ego and greed take over. Good luck to the Indy and the Daily Mail as the latest self-appointed guardians of our eco-future as they slug it out to gain the high profit green ground. Sir Alan would be proud.

However, to end on a more positive note, there are glimmers of gold glinting in the morass.

Having waded through a lot of government 'stuff', I ended up with some guys at the Centre for Remanufacturing and Reuse. They may or may not be able to help, but by golly got back nice and quick with a compliment and some nifty areas that look promising.

With so much deadweights around it's hard not to get weighed down, but it's the few positives like these that keep you going.

We may even make it yet.

STOP PRESS - Relief! The UKTI/BizLink are keen to help and coming round next week. Phew!

STOP PRESS #2 - Mr. Blacker has replied and, despite my venting if not at him at least his employers, kindly, which makes me blush (though the tone does make me wonder if it is not more than a little 'form' in nature. Better than telling me to p*ss off, though!):

Many thanks for your kind email - and the best of luck with your campaign.
Posted by Peter at 12:23 pm No comments:

Who's a clever boy then? 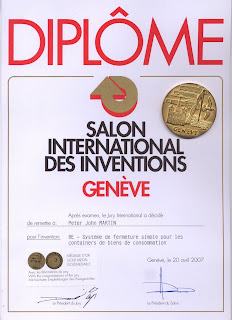 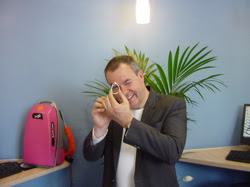 Well, I'm back.
Actually, I have been since Monday, but for reasons that will hopefully become apparent, have been a tad busy elsewhere dealing with the backlog that built up during the Geneva trip... and the consequences of it. Because....

Here's the press release that has been prepared, and I am touting around as we speak to try to make the most of it while it is fresh.


‘Hole-in-one’ for award-winning Herefordshire inventor Ross-on-Wye inventor Peter Martin has been awarded a Gold Medal at the International Exhibition of Inventions held in Geneva last weekend… for a small hole in a strip of plastic. His patented Re:tie concept is simple, but shows just what you can achieve from an inventive approach to recycling. Peter has redesigned the security closure strip used in many drinks bottles and jars, by introducing a block with a hole. This means the strip can be saved and reused as a tie, in the garden, for cabling, for bags – for anything which needs tying together. Peter took his invention to Geneva with his company Junkk.com, and won the Award against stiff competition from the world’s top inventors and major R&D institutions. The international Judges were so impressed with the simplicity and potentially wide application of the eco-design tie that they awarded Gold, and several have subsequently congratulated him by email. ‘It’s one of those “Why didn’t anyone think of this before?” ideas,’ says Peter, whose free website Junkk.com has been created to share how virtually any potentially discardable item can be reused. “I am proud to win such a prestigious award for myself, my company and the UK, but I am particularly thrilled that it was noted for its environmental impact, and potential positive contribution to commercial eco-design. When you are in a place like Switzerland and surrounded by eco-inventions from the likes of Germany and Asia, it is good to show we Brits are creating consumer-friendly solutions that need not incur or impose additional costs.” The RE:tie may be a small change to a piece of plastic, but every little bit helps when it comes to reducing waste and helping save the planet. The Re:tie will also bring manufacturers considerable green-£-based benefits as Peter intends to license the concept for commercial use. He is also hoping to turn the commercial and public interest in RE:tie into further official support for his free re:use ideas website initiative Junkk.com – which offers people a way to exchange second use ideas for all sorts of products and packaging. “After immense interest and support from the 70,000 international visitors to the show, I'd like to accelerate my plans to expand the site into other languages, and establish its postcode localisation facility into other countries.” Peter is now seeking investors for RE:tie, especially if he is to fight off imitations despite his patent: “It would be a pity not to exploit this idea worldwide from a British base. I'd like to see it not only on an Innocent juice carton here, but a jar of jam in China and a bottle of pop in the US, too’.

So, a lot of work to do. I'm trying to get help to protect the idea from the likes of the BusinessLink, UKTI and various government agencies, and of course support from the media.

Both are proving an effort.

I know business help takes time, but it can be frustrating to wade through the systems. There is so much that is in theory on offer, but finding it and making use of it demands a lot of time and inside knowledge which I don't have.

Then there is the media.

I am getting some coverage, but in a week when waste and packing is all over the media, from the Indy to the Daily Mail (who shamelessly seem to have copied the Indy's campaign, not that it was that original or skillfully applied), the level of interest so far (with a few notable, and appreciated, exceptions) has been about what I'd expect from our mighty 4th estate.

And now I watch BBC's Declan in a 5 minute slot* on the same thing. Having already queried their addiction to giving free PR to ASDA, I guess it wouldn't help to wonder why the majority of the slot was about 'an initiative' in 'a few stores', whereby customers are asked to put packs in a bin 'for analysis'. Hmn. Does it it wash as a real, credible attempt? And does the BBC's coverage count as valid, skillful reporting?

Maybe I haven't yet sussed out the secret to getting coverage in this new media age.

*BBC - Tough packaging fines are urged - Check out the vid top right: nice ad for ASDA guys!
Posted by Peter at 7:40 am 1 comment: