Kept in the dark and fed... 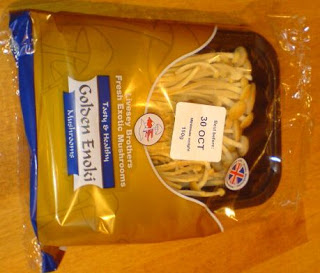 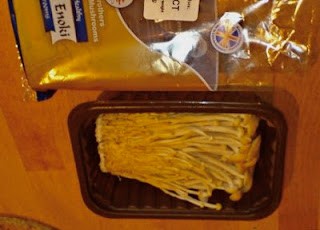 I am usually the first to try to see the industry or food brands' side on matters packaging.

Our local Morrisons has gone all 'veggie', which is actually pretty neat.

The missus is thrilled, with all manner of Chinese veg. on offer (I presume grown hydroponically here rather than in a dioxin-dusted paddy field).

So now going beyond the usual button, field and chestnut options is great.

And most are in baskets to be scooped lovingly by hand into paper bags (albeit with a plastic window). Though one, at £700/kg, may need restraint in the scooping.

However, some are in sealed plastic.

It's hard not to see a possible reason.

What is a bit naughty is the majority of that is in the base bundle that most will cut away... and is conveniently hidden under the printed segment.


That last line is not a critique of the movie.

It's a quote from it:

I had been invited to our local Ross theatre (rediscovering what a great little venue it is), by a local media baron, and approached with some misgivings, not least because I also dragged along 'she who must be entertained'.

Me because I have not had the best experiences with such documentaries, and on the missus' behalf because, well, if you are not a bit of an eco-activist, the subject matter does not exactly equate to the latest Twilight. And one and a half hrs plus on Trash talk is a fair old whack.

But I need not have worried. That time passed quickly and was well spent... for both of us, and I think the rest of the audience, which I was thrilled to discover included 'Mrs. Green' of My Zero Waste and her family. Their presence in part being explained by her having a featured role as a zero waste advocate.

However, in doing justice to an objective review, it is not a movie that will be everyone's idea of a good night out, or to their tastes. I think you would need to be interested in the topic, and happy to see your money going to such an exercise in necessary awareness.

But even if it doesn't appeal as a movie experience, I'd say catching it if and when it is on TV, or when the DVD is released, is a worthy consideration.

There's stuff worth knowing, and it is presented well.

The script is solid, and not preachy, and with a presenter/VO the calibre of Jeremy Irons, and music backdrop by Vangelis, the audio-visual experience is top notch.

Though the full HD impact of a 40m wall of rubbish calving into the sea at the East end of the Med is pretty revolting.

This was one of the biggest out of control land dumps there is, at Sidon, and though vile had an awesomely fascinating aspect to it too. It was like those rock strata you see science types getting excited about to explain dinosaur extinctions or tsunamis.

Which is apt, because in a way it is a waste mountain version of the cr*p 'we' throw out over the decades... centuries. No further back than that, as it was pointed out that it's really only in the last hundred years that we moved from 'natural' materials that degraded 'naturally' on disposal to those that do not, if at all. Or, if they do, into something not nice at all.

This was a thread throughout, and was indeed an area that informed even me, when I thought I was quite on top of the messy aspects of human imposition on this planet.

The expert 'talking heads' referred to were very good, and unlike many advocates came across as reasoned and well-informed. And realistic.

But what they had to share, and show, was not too palatable, even as one sits in a comfy cinema in the well-regulated West. Lured into a false sense on security by 3rd world horror stories, I was unprepared to what was closer to home for comfort.

And Mr. Irons was a great guide in complement. Not too earnest if passionate, and even cynical and self-mocking with a wicked sense of humour on occasion to lighten what too easily could become a voyage into darkness if not careful.

But careful we need to be. I was pretty aware of many of the issues around biodegradability (and will need to revisit my open-ended investigation on this topic that I started a long time ago), but the microparticle 'soup' that plastics which enter the eco-system create was really horrifying to be reminded about. And while 'witches' knickers bags are the stuff of many an M&S/Daily Mail PR stunt, this is an area I am much more concerned about.

One look at the news these days shows the 'authorities' are not always smart or to be trusted, especially when in thrall of big business or under fiscal pressures.

The movie spent a lot of time on what comes out of the chimney, and it's not pretty if the thing is not set up right and run right... including changing filters that are needed to meet safety levels, but get bunged up pronto and need replacing a lot... at vast cost.

I was reminded of our 'bagless' Dyson vacuum, that was to 'save' us a fortune, but whose EPA filter ran up such a replacement bill we got rid of it. So too with such facilities. They cost a lot to build, and more to run. And if the money gets tight, they either run dirty or they shut down.

And if they don't shut down and run dirty... you don't want to be near. And by 'near', I mean on the planet. Like plastic micro/nano particles, what goes up, or down, or in the water, goes around... everywhere.

A large chunk of what is in there that shouldn't be are dioxins, and these are not nice. At all.

A distressing part of the narrative was necessary, and this was a visit to Vietnam, to see the results of dioxin contamination as a result of the Agent Orange spraying during the war there.

Now this was concentrated hugely (and there may be other factors), but even after all this time there seems no doubt that this stuff is not great to get into the food chain, and especially by the time it works up to apex predators... like us.

There was a very nasty scene in a pathology lab in Vietnam to illustrate the one way humans, or at least half of us, can purge out bodies of dioxins, and that is from Mother to unborn child. If you watch... be forewarned, and prepared.

Yet even here in the UK there are 'officials' who at best seem... too comfortable with reassurances from those they'd prefer to hear from than those who don't suit.

And with our headlines currently full of breaches of trust from those in authority... and even complicit media driven more by agendas than professional integrity... I tend to err on the precautionary principle advocated by the Professors and experts we were presented with throughout.

And it's not like some 'we're all doomongering' efforts where the pulls are economic vs. environment; there are compelling triple bottom line arguments in mitigation to be had too. Win-win-wins abounding, just like those we try and push here at Junkk.com or with RE:tie. It doesn't have to be a stark choice between living in a cave or dying a horrible slow death.

If I was to offer a critique, it would be that the movie was 80% problem, and 20% more positive. Though the positives were inspiring. I was thrilled to see a section on the inspirational unpackaged concept, for instance, and especially to hear their spokeslady talk not just in savings terms, but also... shock... making a profit!

But it is necessary to grasp and appreciate that there are some ideals that reality may not allow. Population densities, budgets... time.

These are all vast, intermingled issues that are hugely complex and need to be discussed as part of the whole 'green' deal (and another time than here). And too often this rather key fact gets lost in focusing on one issue. Focus is good, but it can lead to dogma, and dogma can create pockets, and pockets competing for attention can mean inconvenient truths that don't suit get ignored to push the passion, more than being aware of the pragmatic actualities.

The movie made me realise how easy it is to get caught up on one's own little area of concern, and perhaps ignore the bigger picture and how others in theirs need to be related to. But on the whole I felt a strong sense of vindication with what we at Junkk are trying to do, and how it can't hurt and hopefully can help. If in a small way. But it also made me realise that the movie addressed reduction (which has limits), and recycling (which has 'issues') and disposal (which has huge consequences), but barely even tipped a hat at the potential of reuse... especially designed-in reuse, or repair.

Now these are niche and poor cousins, but with a bit of imagination and will, they could become just as big as solutions... and money-making ones too. I hate to say it, but a lot of effort does seem focused on areas of dealing with waste that are now profitable but maybe not that great on enviROI and hence as good for the planet as often claimed. Box-tickers and target-setters do like such things as rates and bonusses can be easily related.

Yes, sending a container with bales of compressed milk bottles to be 'recycled' is better than sending it empty... but what about the possibility they don't need 'processing' at all, and get sent to a place where they can become a new, long-lasting product in their own right? The movie well showed that the resilience of these new waste materials makes them pretty effective in aggressive environments. Why not apply them rather than keep looking for ways to deal with them, if not having them is simply not a consumer society-realistic option?

I noticed that a member of the Rausing family had helped with the funding.

Maybe Tetrapak would be open to an approach from Junkk.com or RE:tie again on the back of this movie, when any tries before have not got past the gatekeepers who can often talk a good tale, but end up failing to walk quite as well in complement?

If they did, maybe together we can find ways to be both clever... and wise? 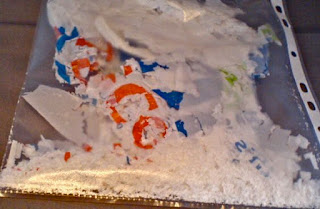 Caption: By coincidence, in chatting with said media baron last week, I happened to stumble across an experiment I had bee conducting, namely leaving a bio-degradable shopping bag to do its thing. Clearly, after a few years, it is on its way, but if non longer a turtle-choking threat, those little pieces are still not very benign.

ADDENDUM 1 - In researching this further, and in wishing all on the US Eastern seaboard well post-Sandy, I found this interesting:

‘New York City is an island built on garbage. Dutch settlers constructed much of the southern tip of Manhattan by extending the shoreline with landfill.’

ADDENDUM 2 - A URL of a new post about the issue closer to home:

ADDENDUM 3 - In compelment to the Energy from Waste segment:

ADDENDUM 4 - an interview with the producer by the packaging industry:

This is a link to a story on the RE:tie blog, as this is what the award was for.

I include it here as there are some packaging/2nd use-related areas of interest too.
Posted by Peter at 12:31 pm No comments: