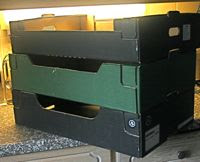 Getting later and later, but this is a good tried and trusted one.
Posted by Peter at 5:17 pm No comments:

And, sometimes, you can be a small part of something rare.

Leaders in step on climate

Yes, it's on the BBC. Even more unique, it's about climate change (though I did note a 'quirk'*). And yet, I took part. To date, it has been worth it.

I am usually hugely underwhelmed by the published results of any poll, from any quarter, especially when a media who depend and thrive on attention and ratings sink their teeth into them.

However, based purely on how reported here, a few things occur...

The British public has become more sceptical about climate change over the last five years, according to a survey.

Twice as many people now agree that "claims that human activities are changing the climate are exaggerated".

Not, exactly, a glowing endorsement of the abilities or trust held in most high-profile politico-media messengers, irrespective of the validity of their message. And, speaking as the parent of teens, not the best basis to go on to effect further change (correction?) in behaviour, be it perceived as 'wrong' or just 'apathy'. But I am guessing, from 'But it does show, I think, that the publics' and their leaders' perceptions of climate change, in the UK and elsewhere, are not significantly out of step." that a change of tack is unlikely any time soon, so carry on. It's worked/working gangbusters so far.

'What we have to get across is that residual uncertainty in science is normal'. And such as this Mondeo Man-engaging phrase is just what's needed to do it.

But, 'A third said there was too much conflicting evidence to know what is actually happening,' which suggests to me that there is still hope, as there are some as smart as they are honest.

Which is why both these sentences are a bit of a worry: "We need to make it clear to people what is due to climate change and what is not. "It is time we made it real to people." This would be 'clarity' according to whom? Made real by whom, and how? Bearing in mind 'Twice as many people now agree that "claims that human activities are changing the climate are exaggerated'. Rather requires a sea change in thinking on the persuasion front from now on, which seems unlikely if the same folk are still dishing it out. And the same public are seeing the next effort coming from those they didn't buy it from before. Trust is tricky to regain.

On current form, I rather worry that 'there is still some way to go before the public's perception matches that of their elected leaders' comes across as less of an observation and more of a challenge to overcome, and not necessarily in a good way, bearing in mind the public's faith in the competence or honesty of those at the helm to date. Especially when a few other 'for your own good' efforts of late have gone down like the proverbial lead balloon, undoing decades of hard fought, sincere and positive efforts.

Some great input here. Especially on matters of communication and perception (which I believe can be changed and worth discussing) beyond the 'science' (which seems to have been bogged down between two dogmatic extremes, often charmingly encapsulated by the words 'deniers' and 'warmists', and pretty much dead in the water as regards rational debate). Just a pity one depends on the other to a significant degree (or two).

I am struggling to recall Y2K, but one thing I do is that on that night I was not in a bunker with my tin foil hat on, so somewhere along the line I either ceased to be bothered or chilled out. And a possibly significant aspect is that I do not recall much, or at least the same level of 'official' headless chicken running then. This seemed mainly a media construct and, as pointed out, perhaps inspired or at least accelerated the public's faith failing with 24/7, over-staffed, under-qualified, excessively narrative enhanced, any-pundit-in-a-storm events interpretation.

Suddenly it wasn't just a few banking systems that were going to fail, it was the end of the world.

And when the likes of me realised that reporters seemed to be flying hither and thither to report on 'the end of the world' from nicer venues untroubled that their planes' clocks might be a bit fast, we tended to err more on the side of those who cautioned it was just a few banking systems. QED.

Not a scientific parallel at all here, in fact dangerously so (potentially), but in terms of our faith in media-driven warning systems based on science....

Another great, telling post. The media love pigeon holes. And adversarial stances. So you are either old, smart and cynical or young, inexperienced and idealistic. Er... how about 'none of the above?', which I rather suspect the average of the silent majority are.

And it also is pretty critical how the questions are put. From surveys to the way they get reported, the *anthropomorphic qualifier pops in and out like a Labour senior minister (it will be the same for Conservative ones if they gain power) from the bunker depending on whether they need to explain a howler or be photographed beside David Beckham.

It may be shorthand, and may be implicit to some, and even be properly applied in the professional research, but that word does not appear, for instance, in the first para of this blog post. I know the climate is changing, and it seems not in a good way. I also think ever more humans are not helping anything much by releasing ever more consequences of their daily business. Just... not so sure yet about the the link, and scale of influence being claimed, and used as excuses for pretty scary stuff by some. Especially those who see cutting back as what others do and some need not (oddly, one set being those they think they 'rule', and another those who treat them with distain but might still fund the odd pension if sucked up to correctly).

I feel like the media coverage needs to change but continue. In what capacity I am not sure. It’s unfortunate that the media has the power to take something serious and turn people off from it.

Bingo, if for different reasons and possibly from different ends of the quaint demographic divide (if by age at least) suggested.

But one last thing to bear in mind. Just because I am proving a harder sell does not mean I don't care, or want to understand. Don't know how many of our passionate youth are parents, but when you are middle aged with kids, with almost none of the suggested consequences in one's lifetime to worry about, the suggestions of some that the likes of me don't have the best interests of my children at heart is at best scientifically silly, and at worst foolishly insulting. That is, if reaching consensus for sensible, practical, action on the part of the total population is really what those more vocal in their 'concerns' really want.

Keetsa - TRUSTING THE GREEN BLOGS TODAY
Posted by Peter at 4:52 pm No comments: