Or perhaps that should read 'less of'?

Although this last winter the Arctic ice extent was greater than that of 2007, during which a record year for summer ice minimum coverage was established, it would appear that this year may also break that record.

This from BBC News reports on how the melting of the Arctic ice appears to be accelerating faster than ever.

Interestingly, some ice research groups are now predicting an ice free Arctic summer as early as 2013! How long before big oil's exploration rigs start to move in?
Posted by Dave at 5:38 pm No comments: 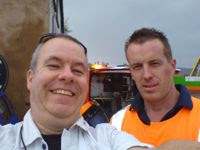 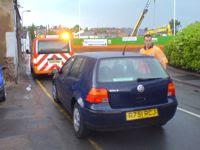 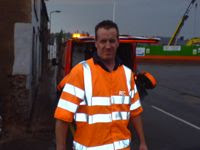 I feel like Earl Hickey in 'My Name is Earl'. We're talking karma.

First the bad... then the good.

Today I set off mid afternoon for an eco-networking event in London. Actually two, and that seemed, well, too good not to combo.

As it was finishing quite late I figured driving, at least most of the way, was the only option to be able to get back home. Karma disagreed.

I could have trained in from Gloucester. I could have opted for the more motorway-friendly (if thirstier) Volvo. But no, I nicked the missus' Golf to eke out the juice.

Unfortunately this was not a good plan. At least, it was great until Reading. Then things went the shape of the pear in the form of a water pump exploding.

But Karma then smiled. I managed to get off the motorway. Thanks to mobile technology and sensible insurance I simply popped the bonnet and called up the RAC and waited. Ralph appeared within 15 minutes.

And he went the extra mile... literally. All the way back to Ross, and beyond his radius. But as he agreed, it would have been bad for the planet to call a truck to take us back when it made much more sense for him to tow me then and there.

Hence I write this now and not midnight. Thank you Ralph. However, Karma, you are a feisty minx. Maybe there was a reason I was meant to miss that event. But there'll be another. I even managed to get the host on the horn and tell him my plight, and he was cool.

It could have been better, but also a lot worse.

Addendum - Now, why did I have to rush to print. No more smile like the pic above;(

The garage just called. I dod the right thing in driving on a bit to get out the fast lane and stick the car off motorway asap, but in so doing killed the engine. Totally. So now I either scrap a perfectly good shell or pop in a replacement. Actually one option I'm thinking is popping in a more frugal engine.

When the water temp warning goes on, as soon as it is safe to do so...STOP! And don't be tempted to move any more.

Addendum 2 - Sheesh, Karma is toying with me. Dan, of Greenbang.com, whose event I was headed for, has kindly offered to do a story on Junkk.com and RE:tie in his very good, very widely read publication.