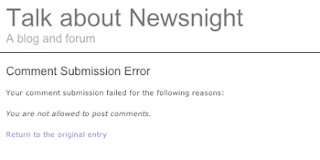 Not the first. Won't be the last: Live Earth in Newsnight

Technical hitch? See that panel? It's what I got when I tried to post this. Seems a tad low on explanation, not to mention unhelpful as to resolutions.

Interesting to ponder the relative number of comments for this issue vs., say, JP's tie. Ho hum.

Anyway, I have just watched the piece and see it as a worthy start point to what will doubtless become a fairly healthy debate about what the individual gets exhorted to do, can do, and does. Plus those who would take it upon themselves to 'help'.

This is TV. So you get powerful imagery and snappy sound bites. I was therefore unsurprised to see scenes of heavy industry and belching smokestacks, with the VO saying something like : 'it's about stopping them doing this... '. Ok, fine, but that ore being smelted goes towards a lot of iPods, CDS and custom 737s. I wonder how many will ponder the irony, or consequences of what they campaign against, as they party away. Or care.

But to offset this we get... planting trees. A bit unfair to select just this Joss Stone quote as I am sure there are... were others, and a bit more considered than hers. Sadly, while there are still some viable offsetting options of this nature, in this member of the public's mind the principle of whacking a fir in the firmament to 'deal' with the last gig, without really worrying what happens thereafter, has been rather discredited thanks to some, rather high-profile, 'offsetbacks'.

For what it's worth, if we are going to think forest, I'd advocate considering this from Newsnight's very own archives a few weeks ago: http://junkk.blogspot.com/2007/06/i-can-see-forest-and-trees.html

Though over in a flash, and a perhaps a tad over simplistic, the preamble about the 'Chinese' question was still telling. Seems it's for the US to start, and they'll wait, despite their own strategy predictions. Understandable in most ways, but a bit akin to the scene in Blazing Saddles where the black sheriff holds a gun to his own head, only this time the rest of the world's 'heads' attached in line: 'Cut emissions first, or we ALL get it'. Hmmn. 'Rein in your economy (and hence military spending), to allow us to catch up, and we promise we'll stop making dolls, and tanks, as soon as we have the same number of SUVs and a/cs'. Is that gonna happen?

I also don't recall too much by way of the vox pop responders' thoughts on the concert, as such.

Anyway, interesting to see two such well versed (and one presumes, paid) members of the green elite 'industry' in such polite debate. I'd have preferred a few from more challenging viewpoints across the table, with the interviewer being allowed to be more balanced in her critiques, which of necessity seemed to be too much in that role, with the authority her chairperson position confers.

I have to agree totally with the chap from Global Cool, though: the danger is in this being packaged, and hence viewed, as a one-off event. A bit like Ethical Man, where I was very disappointed to see all the year long 'good' in information and awareness rather undercut by it all... stopping. I felt the message left was unfortunate, with an impression that this is something one dabbles in, does a bit of, and then gets back to the real world of rampant consumerism, travel and anything else money can buy in pursuit of the next 'hit', fad or rating.

As stated, these are now ambassadors of, what? Doing 'what I say but not, necessarily, do?' It was accepted that they ''have" to fly around. So, I guess, does Air 'Well, it's not really practical for ME not to' Blair, plus of course all the carbon traders from the City, and ecojournos on book promos, and... er... who is left?

While not simple at all, we can surely accept that most of the problems from CO2 emissions can be pretty much laid at the door of the affluent consuming like stink. And you don't get much more affluent than rock stars. So it's hard to imagine them having all this wonga and not being a teensie bit tempted to blow it all on a few indulgences. And I reckon when they do, a tabloid will be ready and waiting. And while they may have offset their last hat-collection flight by buying half of Africa a solar cooker to prevent the inefficient burning of wood, Mondeo Man (and maybe even Pious Person in a green broadsheet) will be sitting in his tent in a monsoon in the Mendips, reading his Daily Mirror about Huffy Diddly on the beach in the Caribbean on a jet ski. And that may not play so well to the cause.

If they believe in what they are doing, and that it is their celebrity and not so much the music that really matters, if going to walk around the country with a big banner is not going to happen, I'd like to simply ask...why?

And, to be fair to them, has anyone asked? Seems a heck on an idea. Relevant too. As noted, we get an 'awareness' concert pretty much each week now.

Hence Saint Bob's rather colourful views on the actual need for more 'awareness' beyond boosting CD sales resonates, but for perhaps not the right reasons. We have the message. But what of the messengers? Joss and her popping a sapling in? For one night? It has the same effect on me as newspaper supplements on green travel offsetting that issue to show they are on board, yet still sending a correspondent the next week to cover a fur and Ferrari catwalk show in Antarctica to promote a 'see the polar bears before they're gone' competition. Pop your green token in the slot here.

I will be mostly in the garden today, as it is shaping up as a nice one. But I will be dipping in to the show when I can, if I can. I wish it... them... well, but really hope that the tangibles that are inspired from it are as positive as intended, and go a lot further than all I have heard about, which so far seems to be a pledge. I made one a while ago, and got a low energy bulb, which was nice. And useful.

ADDENDUM 1 - 1.30pm. - Just grabbing a bit to eat and watching the initial preparation, as covered by BBC2 (love the helicopter shot, guys, no irony. Unless it's stock footage, which it could be as I think we know what the stadium looks like from the air. If so, apologies). Hmmn. Jonathon Ross. Graham Norton. Jimmy Carr. Some other guy. Maybe the more appropriate guys and gals were out enjoying the sun. By my rough estimate, from this lot it was about 10% what they might be doing/do e-wise, and 90% 'it's a bit of a lark, and I can't wait to hear Madonna's special ditty'. Oh, and to David Shukman's (BBC Enviro Correspondent, who I last saw earlier this week at Venturefest) quip about turning off the TV, oh, how we laughed, as that would mean they were out of jobs. And now we also know JR is not giving up his plasma, as well, he just isn't (I'm guessing the scores of screens in the empty green elite rooms were low energy). So far, I think the message is not being best served by those tasked, on this channel at least, to dish it out, especially as I watch Chris Moyles (well known environmentalist) introduce Genesis, to what looks like a half empty stadium if what's red is an empty seat. What's all that about? Wimbledon? It's Genesis!!! Here's hoping that the artists can compensate in getting a better message across without such media support. Anyway, I'm off back outside to pop the grass clippings in the compost. No, really. I'm afraid, as far as I'm concerned, happiness is solar powered, and not from an amp, no matter how worthy.

Addendum 2 - 4.15pm - Teabreak. Well, at least the stadium seems to have filled up. Just seems weird it wasn't packed from the off. I'm sure it would be for a Cup Final. Maybe a security issue? Crowd seems to be having fun at least. And, at least, I say this totally without tongue in cheek, they had a nice day for it. No interference from the BBC talking heads this time, but so far I haven't heard an artist offer much either. Probably a good thing. Let the fact of being there, and the fun of the music, speak for itself.

Addendum 3 - 6.00pm - Post Chili Peppers break. Cut to Graham Norton in the 'VIP' section. Quite funny, as he didn't seem to feel there were any VIPs, except for those who are green VIPs, and that seemed not to impress him a great deal. Currently watching an actually sensible discussion between JR, Kate Silverton and David Shukman.

There seems to be quite some surprise that a lot of folk are quite happy to admit they are just here to have a good time and that the whole climate thing is ok, too. Some real, and warranted, concern that even more, especially of those writing in, are of the view the science is still being debated. We've discussed this before here, and the issue must be to get what we do know out there, honestly but also with enough oompf to persuade people to accept a change in behaviour is necessary.

Finally (as we are going out tonight), I was more than interested that the BBC pundits, in fact led by David Shukman, felt the 'pledge' was a tad ambitious. I have to say I agree. In know one school of negotiating thought is to aim high but agree a trade lower that is in fact where you want to be. I'm not so sure in this case. If the target looks too unattainable, there may be a danger that people simply don't even try. Baby steps, but lots of incremental ones, may be the order of the day. Anyway, should you choose to engage with them in the way requested, here is that pledge:

1. To demand that my country join an international treaty within the next 2 years that cuts global warming pollution by 90 percent in developed countries and by more than half worldwide in time for the next generation to inherit a healthy earth;

2. To take personal action to help solve the climate crisis by reducing my own CO2 pollution as much as I can and offsetting the rest to become "carbon neutral;"

3. To fight for a moratorium on the construction of any new generating facility that burns coal without the capacity to safely trap and store the CO2;

4. To work for a dramatic increase in the energy efficiency of my home, workplace, school, place of worship, and means of transportation;

5. To fight for laws and policies that expand the use of renewable energy sources and reduce dependence on oil and coal;

6. To plant new trees and to join with others in preserving and protecting forests; and,

7. To buy from businesses and support leaders who share my commitment to solving the climate crisis and building a sustainable, just, and prosperous world for the 21st century.

There may be mechanisms, but I have to say that, should I wish to engage with these (and in the main, why on earth wouldn't you?), I am none to sure what exactly to do next. It would be good to ensure that the momentum created is shaped and focused as well as can be. Not sure it is.

I think I'll close this post here. Tomorrow will doubtless offer a lot of material to chew on following the day's events. It will be interesting to see how it gets reported.