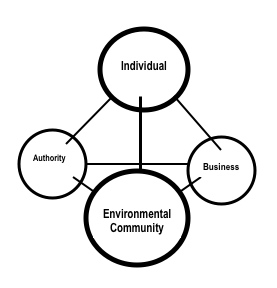 I have been filling out some grant and award forms lately and, having come over all MBA, for one created a little graphic to make a point, which I think is worth sharing. I call it E-ramid.

Basically I was trying to distill, into the most basic form possible, the inter-relationships between the core parties who are (or should be) involved in getting our environment back on track.

The orientation is key. The Environmental Community has long been highly active and vocal, but now the Authorities and Business are on board, if a ways behind. These guys are at least all talking, or perhaps arguing would be more accurate.

Thing is, they are mostly doing it in their own cosy little agenda-dominated, jargon-driven, green-elite ways. And that is too often leaving the individual they should be most interested in serving out the equation. In fact the only time the public/consumer are involved is more in the form of being fed scraps, getting scolded... and very seldom rewarded. In this model they would be placed below the triumvirate.

But I think this group needs to be the focus, and to whom all the rest should look up to, much in the same way as an organisational hierarchy works, being given management summaries with issues and consequences that can be easily digested and understood, and with scenarios painted that allow for proactive decisions to be made. By taking those decisions the performance-related bonuses can follow.

And they need to be able to assess performances, so that those initiatives that do work and deliver value for money are encouraged, while those whose returns on investment (though it does need to be accepted that there is a very complex and highly charged interaction, often mutually-exclusive, between 'benefits' that are financial, social and environmental) are not delivering the most good.