It's the Sun wot did it: BBC

The Chilling Stars by Calder and Svensmark

"I thought I’d wait and watch the slot before commenting. Having done so I have I must say that it presents a dilemma. It’s one that has been discussed on these e-pages before about the level of balance that needs to be shown by the media in presenting all sides of an argument, and the agendas they can be accused of following when some find it wanting.

This was, one could fairly say, a more contrary view on the causes, effects and solutions to ‘climate change’ to what I hope I can equally fairly claim to be a rather more extensive, possibly majority consensus. Which makes it rather tantalising to media outlets by being at least different, and even... controversial, maybe? So we get the inevitable +/- twofer, only against the duffer (who will be dust before his notions can be proved wrong, which he seemed to be saying we should wait for) this time at least we had a very sane, coherent young lady who knew her stuff and put her case and rebuttals well. With only Mr. Paxman to lob in the odd pot-stirrer to try and throw her off.

Yet look... good golly, there is a book to go with it. Hmmmn. To get a balanced view I have to stump up, and to encourage me to do so I have the benefit of a rather nifty level of free promotion courtesy of the nation’s public, and public-funded, broadcaster.

See.... dilemma. Thing is, in this case I just don’t buy it. The argument. Or the book. Shame that the same doesn’t apply to where I get my broadcast information from, if I think it’s more about ratings than balance.

Is it me, or is that making you shiver too? I’ll go with posts 6&9, James & Paul, on the cause of logic and fact in how best to proceed.

ps: the piece on vultures just made me sick – especially as the govt. decided ‘it couldn’t appear’. Is this the new standard of debate and accountability we can expect in the UK?

pps: Loved the music. Never liked the man. But by 'eck, I had to applaud what Noel G had to say about entertainers and politics. Guess he won't be headlining Global Cool then."
Posted by Peter at 1:15 pm No comments:

Dave at Solarventi has kindly send me this:

Just found this by accident - http://www.demos.co.uk/themes/~clim
If you look at the Technorati links they are all links to your blog.

Now I need a bit of help here.

a) Is this a good thing? (They seem very nice folk and their mission is in keeping with mine from a quick scope of the site).

b) How does this Technorati thing work?

d) How do we work the same magic elsewhere, starting with de.licio.us?

Any offers welcomed!
Posted by Peter at 11:57 am No comments:

So, become an MP.

This all sounds so super and sensible.

Of course cycling is to be admired, and advocated... wherever and whenever possible.

I just wish those that pay my salary (now, who pays for Westminster dwellers' time?) where as cooperative on funding the time I take getting to and fro. They seem only keen on stumping up for time spent working, sadly. Something those who set policy and impose taxes, so most have to cover as much ground in as little time as possible, would be as well to bear in mind.

Enjoy the fresh air and view, mate. I wish I could.

Next thing we know you'll be touring around South America on your trusty Triumph with a full BBC film crew in tow (4x4s are really the only thing practical for all the kit, dontyaknow), blogging the jaunt to raise awareness in all the rest of us for how horrible our lives are... for the environment.

When poachers turn gamekeepers. With nukes.

This issue has rumbled on so long I almost sailed past it.

Then I saw who the pro-nuclear advocate in question was, and that makes it worthy of note in the debate, and coming to a pragmatic opinion.

That, of course, along with the facts quoted (in this day and age, one man's fact is another's lobby-group propaganda), I leave to you.
Posted by Peter at 8:31 am No comments: 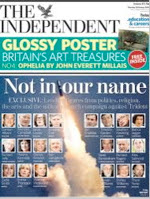 If you look back over the last few blogs you will see I have become a little testy with those from the chattering classes that seem to feel that they are slightly above the rest of us, and such things as popular petitions are really rather grubby, ineffective and even if a million+ (with some wonderful juggling on what % of the voting population they constitute) do offer an opinion it is... misguided.

So, with due deference to our youngers and betters in the media, I bring you something Not in our (now who is that?) name: what looks pretty much like a petition.

How very Animal Farm, now some petitions are more relevant than others, and a few score elite - Leading figures from politics, religion, the arts (leading whom, exactly?) and the military - are waaay more important than the mere working public.

ps: In the Indy yesterday, and I admit to being selective, but these are direct quotes: 'Petitions should not determine government policy', 'we should not be unduly swayed by this petition'

You know, I'm getting a teenie bit tired of being told I am not as worthy of having, and/or expressing an opinion by those who feel better positioned to do so.

One thing is true though. Nothing will kill the value of this valuable opportunity to actually engage the workings of government with the working classes quicker than all the nonsense petitions, which are clogging the system. Democracy inaction, I guess.

And those used to a clear, suitably moderated (thanks, CiF) shot at telling us what to do and think (pols, commentators, spokespersons) all have a vested interest in making it so. There's an unholy alliance against a great threat: a population fed up with being fed spin and kept in a froth, who just want to get on and do what they can and is reasonable to make life fairer and safer for their families and futures.

Just before the airflown compost hit the windwill, I had submitted a compromise IHT petition advocating a Carbon Legacy to future generations, which has been acknowledged but not yet accepted or rejected - http://junkk.blogspot.com/2007/02/carbon-legacy.html . Just a tad busy elsewhere at the 'mo to get it up, I'm hoping.

I also sweat on it getting rejected for not mutting the custard. Or maybe being too sensible and uncontentious to risk being shared with the ignorant masses.

Because that just seems how some want to keep things that they don't control these days - divide & rule!

BBC - Transport targets 'not being met'