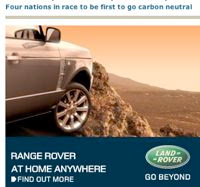 I was just catching up on my Sunday reading online, after a most productive day making some kitchen units and pottering in the garden in the sun.

This little effort caught my eye.

It seems that while villages can still score a bag-ban mention (latest is in Norfolk) we have now moved to country level in the green competition stakes.

Well, I can think of worse things to strive for.

It was an relatively interesting piece I guess, but really the accolade rather seems to boil ('scuse pun) on whether you are sitting on top of a volcano or have near limitless hydro on tap. Basically how you make your 'leccy. And having lucked out on that score, you can offset your ethics away and buy anything you fancy, secure in the knowledge that the overall tally will look better than the next person..

Anyhoo, the Indy has kindly provided some ideas on the same page for what form of transport you might opt for where your home might be.
Posted by Peter at 7:37 pm No comments:

When I saw the number of staff that the BBC were sending to Beijing this summer, to cover the 'Orympic Games', of course, that was my initial silly thought. According to this from the Daily Mail, they are sending 100+ more staff (437!!) than Great Britain is sending competitors!

Now, why so many staff? That's what; perhaps a full camera crew for every five competitors? Are they going to be filming the entire squad 24/7 while they eat, sleep, do their ablutions and train - a la 'big brother' style?

Or just maybe it just happens that it's time for the four yearly jolly, for as many as possible of the Beeb's great and good (and bad?), to the planet's largest sporting event?

Seems to be an awful lot of staff for what will probably be the usual crappy coverage ("sorry, the local director cut the shot just as the finalists were approaching the finishing line - we'll find out what happened for you later").

I just want to know who the hell will be left here in the UK? Imagine the possibilities:-
- Breakfast News with Katie the tea lady?
- The Evening News presented by Sonya the night cleaning lady?
- Cricket highlights presented by the BBC Centre Security Doorman (2nd cousin twice removed of Michael Vaughan)?

Well, I suppose our license fee has to be put to some good use! And, of course, there will be a full explanation of the cost breakdown, and full accountability, after the event, won't there?