I could have sworn I had seen, and mentioned, this before, but no harm no foul in doing so again: CO2 car rankings site launched

Can't hurt. Though I'd hazard more will look at the tax than what comes out of the pipe.

Which still means you can drive all day, emitting away, in a 'good' car, and drive a few miles and park but still get slaughtered by buying a 'bad' one. Not quite so sure how the latest Minister for Jams and Sources (of income) arrives at his figures, but I'm sure a full department created them, which means they must be good.

Maybe the best solution is buy a good one and not drive it very far. Or not drive it. Or not buy it at all! Or...
Posted by Peter at 5:31 pm No comments:

Email ThisBlogThis!Share to TwitterShare to FacebookShare to Pinterest
Labels: AUTO

As I look at a stack of worthy press releases that should be properly written up and archived on the main site (lack of holiday support being my reason, if not excuse), I just have to post this here, and now, pretty much as is. And in so doing, give much needed PR and cred to that well known environmental magazine, Nuts. But it's fun, so... um.. oh, nuts. See, I have been seduced to the trivial side already!

MOVE OVER FUNNY MAN, THE GREEN MAN IS THE NEW DATING KING

Key to a modern woman’s (well, 1,500 at least, which is a better sample than most research I've seen on actual issues that matter) heart is saving the planet. Of the personality traits that they found most attractive in men topping the list is showing you care about the environment. Demonstrating you’ve got green credentials and is now the number one quality modern British women seek in a partner.

This change in attitude can in a large part be put down to the recent green- avalanche of star-studded eco events such as Live Earth. Global heart-throbs from George Clooney and Brad Pitt to Justin Timberlake and Johnny Borrell (who?) all now all proudly endorsing the green agenda - meaning that being green is no longer just trendy – it’s down right sexy.

The results set a precedent for legions of UK Green Men who may soon need to trade in their gas guzzling cars for greener bicycles in a bid to impress women. Toppling the classic ‘Good Sense of Humour’- GSOH - for the first time, the research proves once and for all that recycling and growing vegetables in the back garden are no longer the preserve of wellie toting hippies.

Nuts magazine relationship expert (a what?) Louise Prior said: “There’s something sexy about a man who recycles, it shows that he cares about more than just himself and shows he has a sensitive side and thinks about the future. As for some of the other traits, you can’t go wrong with making a woman laugh, but modern women want their men to be caring. It started with the new man back in the 90s, more recently we’ve had the whole Metrosexual phenomena and green man is an extension of that really!”

Caring about the environment - tick
Good sense of humour - er, have you seen my bank statement?
Confidence - in spades. No really, I think they are the best for digging holes for compost.
Intelligence - moving quickly on.
Well travelled and worldly-wise - that would be 'then', 'cos if we're saving the planet travelling anywhere, much less well, would be a 'no-no', surely? And that makes me wise, hmmn?
Empathy and understanding - I feel your pain... reading this.
Good dress sense / style - Er, we are talking guys who mess around with rubbish here.
Ambition - If wanting to make the planet a better place counts... tick! An Aston Martin would be nice, too. Once they have the hybrid version sorted out.
Knowledge of current affairs - Hilary who? Go on, ask me....
Good with children - I'll ask the boys when they have finished sanding the roof lintels all day.

So OK, laydees, who would like to see my composting bin?
Posted by Peter at 1:48 pm 3 comments:

For anyone with sufficient time on their hands to wade through all 216 pages, including all the oral evidence given, the Seventh Report of Session 2006–07 from the Environmental Audit Committee was published yesterday.

Entitled "Beyond Stern: From the Climate Change Programme Review to the Draft Climate Change Bill", it is a huge tome of information covering every issue you can shake a stick at. Sorry but I personally could not possibly find the time to go through in depth, so a few choice excerpts from a speed read skim are all that I can manage for now.

"Climate change is on a different scale from any other political challenge. Its potential effects could be both physically and economically devastating."

Can't see anyone arguing with that.

"It is clear to us that the Government will have to introduce more radical policies into its Climate Change Programme very soon if it is to meet even the 2020 target as currently set."

"The Government’s policy towards the UK’s 2050 target is clearly incoherent. The Government remains committed to limiting global warming to a rise of 2oC; but it also acknowledges that, according to recent scientific research, a cut in UK emissions of 60% by 2050 is now very unlikely to be consistent with delivering this goal."

I.e. The targets are NOT going to be met with the current plans.

"We recommend that the Government should admit the uncertainty range of its emissions projections. It should also regularly publish a review of its previous projections, comparing them against outturn data and latest projections, and analyse what it got right, what it got wrong, why it did so, and what lessons it has learned."

So that'll be something radical, a government that might have to admit that it got things wrong! Maybe if there's an X in the month!

All in all it doesn't look too good. Science is refining the temperature predictions and suggesting that less CO2 may well produce the 2C effect, and although the UK's targets were some of the most stringent on the planet, they are already inadequate and woefully behind schedule.

Addendum: 3/8/2008
But, of course, any criticism was bound to be rapidly and effectively deflected by the government. Apparently ignoring the key points made, Hilary Benn in The Guardian, insists that the Climate Change Bill is a world's first, and "ambitious by any standard and consistent with our leading position internationally".

Are the facts that: a) its probably not enough, and b) its way behind schedule already, not considered important?

From that well-known bastion of eco-awareness, the Guardian, about another, er, bast... newspa.. er... well, anyway, The Sun:

Yet more embarrassment for a TV indie. Production company Renegade Pictures has apologised for fly tipping while filming a documentary... about green living. The Sun reports today that crew members left piles of cardboard on a street in Bath after shooting Fix the World in the city. Producer Paul O'Connor apologised 'unreservedly' for the mishap, telling the paper the crew expected the rubbish to be picked up by binmen. The Sun P16

Couldn't find it on the Sun's woeful website (though they do have a 'green' section, and it's not just naked girls sprayed with broccoli*) to link to, but what a hoot.

And that excuse! Up there with Pete (I was just doing research) Townsend et al.

I wonder if they got away with it? ''Wot, I left them 20 old fridges on the layby 'cos I expected the bin men to pick it up!' Bless.

I am still giggling at the EST 'Do your 20% ad' that had everyone swithcing off their lights in a leafy London subaurd before jumping into a dirty great balck VW Touran to go to the shops. I bet that was the director's car!
Posted by Peter at 11:04 am 1 comment:

Email ThisBlogThis!Share to TwitterShare to FacebookShare to Pinterest
Labels: NEWSFLIP, THE SUN

Meanwhile, what comes down the pipe to your home is...

It's a better than nothing, I guess but I couldn't help but crank a slight eyebrow at this: NPower launches eco-friendly ads

I've always been a bit dubious on nPower since seeing their activities at the Ideal Home Show 'eco' (Ahem, not) theme year, when they were a major sponsor. And Juice has been low on my estimation since seeing a bunch of Greenpeace cardboard stuck on 4x4s at Gloucester train station, sponsored by same.

At least the Guardian has at least put it that 'the energy company says the initiative is the UK's first eco-friendly campaign'. Up there with carbon neutral, I am unsure what the heck that means, or does. Or anything.

Or indeed what the actual enviROI is, as opposed to just winning advertising awards and spinning a green story.
Posted by Peter at 10:49 am 5 comments:

On the positive, proactive side, I have to say I prefer the notion of a reward to encourage good behaviour as opposed to a fine or somesuch to penalise bad.

I don't live there so I don't know, but what are the others doing?

But realistically, it's probably going to need to be a mixture of both.
Posted by Peter at 10:17 am No comments:

The future of wind power? 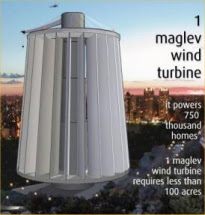 These have been talked about for a few years now, but this is the first time I've come across any comments on their potential size and projected efficiency. This article from Gizmag details the design and concept of giant maglev wind turbines. With no friction to overcome, it is claimed that these will prove to be very low maintenance, but more importantly, will be efficient at wind speed as low as 1.5 Metres per second.

The concept projects that a single maglev turbine as big as a block of flats could have an output of almost 1 gigawatt and have an ROI of less than 1 year!

No doubt some will find them objectionable as being ugly, evil, unnecessary or even just a touch of NIMBYism may come into play. But, if the ROI is as low as claimed and running costs are as low as stated then perhaps we can expect to see these appearing on the UK landscape over the next 10 to 20 years.

Hmmm, I wonder if anyone is working on a domestic property scale model?
Posted by Dave at 8:44 am 3 comments:

Putting green in the shade

I recently read this - Who's the greenest of them all? , and decided to pursue it a bit further. The editor has kindly replied.

It kind of highlights what has been mentioned earlier about 'looking' green without actually 'being' it becoming a worrying trend.
Posted by Peter at 7:34 am 3 comments:

I guess I do have what it takes when it comes to (vast) sums: WRAP Board Extends Its Strategic Skills Base With Appointment Of Three New Non Executive Directors

We look forward to their contribution.

Established as a not-for-profit company in 2000, WRAP is backed by Government funding from Defra and the devolved administrations in Scotland, Wales and Northern Ireland.

I wonder if they have a bonus structure like the Environment 'but we promised them huge amounts before it all went pear-shaped on their watch' Agency?

I'm still trying to get to grips with the lack of conflict in interest to using public money to spend on comms budgets, to drive up rates that their measures of success are based on, and then subsequently richly rewarded on a personal basis for meeting such 'targets'.

Since when did not-for profit public service end up with such money-dripping schemes beyond a decent salary for a good job?
Posted by Peter at 7:10 am No comments: