Wind in the willows - not great for energy generation, though 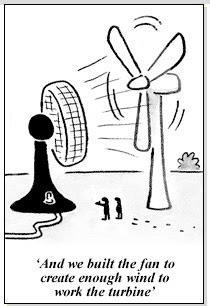 It is hard not to be more than a little perturbed by this (and the feelings expressed in the attached, if hilarious, ad): Wind farm cash-in for renewable energy companies

When trust is in such short supply, with issues of climate change seemingly so critical, we really need to get to what positive enviROI solutions there are and throw our weight behind them.

This kind of thing doesn't help much. All I can point to is the caveat '...it has been claimed', which merely makes me point to the media's role in all this.

'Experts said claims of wind farm potential were being overestimated...' Who, where, what... how? And this pointing at the BBC, who are not usually known for their green-critiques, if 'BBC is biased' current debates are to be cited.

I have to say, the figures do not look good. I just hope that I may one day get a proper analysis and something approaching the truth.

I must try and locate this Radio 4 Costing the Earth source.
Posted by Peter at 10:07 pm No comments:

The nuts of 'may'

Central targets MAY hinder long term waste objectives according to a report funded by the Economic and Social Research Council.

...because reuse activities did not contribute to recycling targets.

Tackling the right issues head on

There seems to be a perhaps not so odd trend to try and ignore potent, but not so convenient facts when trying to push a cause and/or steer public behaviour. But in the very odd hope that people do not have eyes of their own, and brains to figure out what is affecting them the most.

Hence I fully understand why it is a good eco thing to holiday in Britain but, as I have mentioned before, beyond the weather (maybe self-correcting), the sheer cost is a massive factor in our family decisions. Beyond sitting in a tent on the Wye and eating home-cooked sausages (very nice but after four years a bit of a chore... and bore), the money one blows is prohibitive vs. a bit of sun, sea and sand overseas.

And then there's cycling. I really have not one thing to say against it on almost any basis, though the realities of a 5 mile ride up and down hills in a winter rainstorm to and from work seems to make some advocacy 'optimistic'.

However, there is one thing I'm afraid a few public service campaigns will not sway me on, and that's safety. And when it comes to my kids, that is a problem, no matter how many BBC slots on kids cycling get aired.

Yesterday I decided to take my boys on the road for the first time, them having passed their cycling proficiency. Before it was a 10 minute drive to their chum's house. This time it was 30 minutes. Nice weather. Glorious. And in having to go to a fro twice I got a work out.

Thing is, as we returned and pedalled slowly but surely in convoy up a long hill to town, I was almost knocked off by a clown who just had to get past to then immediately turn left across my bow and then, worse, a psycho decided the car he was following as it approached us at a legal 30mph needing overtaking. He only just got back into his lane as he reached my boys and I.

Short of cars being banned, which ain't gonna happen, and dangerous driving being enforced by police and not revenue robots, which has long since passed into the stuff of bad humour, and actual criminals being prosecuted rather than soft money targets, I don't think I am going to be letting my kids loose on this country's roads alone.

No matter how many boxes may get ticked trying to persuade me.
Posted by Peter at 3:05 pm No comments:

And if we can get cows to burp into a mask...

First up, I am grateful for what I see as a genuinely positive example of sponsorship, namely Carbon Trust letting one have free access to the Econmist's editorial on the environment.

Which is how I came across this: The great submarine burp

Interesting stuff. Of course one has to be a tad concerned that the main thrust is in finding more sources and hence more ways to burn stuff, no matter how much better.

A shame there can't be a way to economically (and with decent enviROI) capture the raw gas (at its 25x climate damaging multiplier to our exhalations) capture the raw gas from such as Daisy or, more practically, the peat-bog, permafrost domes that I have rad may soon be issuing forth.

At least that way it is intercepting a problem to supply an extension on our energy addictions.

"They ain't making any more of it!"

Is the self-supplied justification of, I believe, Mark Twain to his suggestion that one should 'invest in land'. And when you read such as this - Food demand and climate straining soils - you have to see merit.

Not just as a financial motive, but simple survival.

Of course, there are a few bits and bobs such as Hong Kong and Singapore that show a tad more may be added, but not much, soglobally it's not looking too great.

Though meant as a caution, I stumbled a bit on these words: "With a rising world population and biofuels, more land is needed".

Maybe it may be better to get it into the mindset that no 'more' land should needed, as that can only mean being 'converted' into anything other than what it is doing now. Which in turn surely means figuring out - quick - how to cap demand... on housing, fuel, etc, so we can dedicate what we have to supporting who we have with what it can.

You can see where I am going, but like so many, I guess I am skirting the big issue because it's not too pop...ular. But I guess obsessing on plastic bags rather than deforestation does secure a more convenient gig for the pols, media and activist brigades.

With a head well and truly done in trying to simply cope with the datafest and slanging matches of the BOFDIs and their opposing, equally well-funded talkers, I think I need to tune back a bit and concentrate on doing my little bit to reduce waste.

Newsnight - Food production
Posted by Peter at 9:12 am No comments:

I note that WRAP has a new guy in charge of what gets shared with us: WRAP Appoints New Director of Communications

His predecessor has been advised as leaving to join the BBC, though in what capacity I am not sure.

Nick Gammage brings broad communications experience from the public and private sectors to the WRAP Executive team. Having begun his career as a newspaper journalist, he held several senior communications posts in Whitehall before becoming Director of Communications at the telecoms regulator OFTEL.

In recent years, Nick has served as Director of Communications for the Consumers’ Association, the London Stock Exchange, and most recently in the City for Lloyd’s insurance market, where he set up a communications operation in the United States and helped steer the market through the aftermath of the worst hurricane season on record which led to record claims.

All of which I am sure will be of fantastic help in conveying messages to and creating engagement with consumers and the general public more attuned to the efforts of branded fmcg advertisers, as been so successfully achieved to date. Expenditures of multi-millions on campaigns to tell us, for instance, 'to recycle', have generated increased rates that have easily met the targets that warrant significant bonuses.

Here's hoping the WRAP output may now return a decent enviROI, or even just ROI on the ad spend.
Posted by Peter at 7:46 am No comments: