Here's yet another twist on hydrogen fuel cell powered vehicles as reported by Channel4.

"The Georgia Tech car can run on conventional petrol or diesel, but has an on-board processor to separate out the hydrogen in the fuel. The hydrogen is used to run the car, as in a fuel cell vehicle, giving zero-emissions operation (the only waste product is water) and the carbon is stored in a liquid solution."

The idea is that the remaining hydrocarbon liquid contains all the carbon, which is then reprocessed to create yet more fuel. Sounds like an interesting concept. Let's see how it develops.
Posted by Dave at 4:26 pm No comments:

I just missed the opportunity to get all kultur'd up thanks to Homie Brown and his boys 'n girls from da Westminster hood's new plan, so I think I'm mixing a few literary icons.

I know there's something about 6 degrees of separation and how we're all just a few links off being Royal, but that'll teach me for giving up at O level.

Anyhoo, it's a snappy title, which I have hijacked to describe the fine art of talking about something, mainly to stir it up a bit, but in ways that isolate me from the consequences. A bit like when a reporter says 'some say...', and you just wish the interviewee won't budge 'til they 'fess up that it's actually them and no one else has said a thing.

But here I quote a blog that quotes others, so I'm pretty golden. Well, other than now, when I say that these two pieces make pretty clear that my concerns on enviROI of so-called 'green' initiatives and the associated (lack of) joined up thinking around them. Plus some 'solutions' not actaully, as such, doing much more than make a few folk rich and a few others feel better about themselves. Oh, and a few media keeping occupied talking things up and then down, which is a win-win. I just need one win: what works.

Greenbang.com - The £50 million wave fund that no one wants - whack up a windmill (with a few issues pending), no problem. Daily, regular, reliable tides.... hmnnn.

I have an acronym coming... O, DTTTI.. Only delaying tactics 'til the inevitable?
Posted by Peter at 12:23 pm No comments: 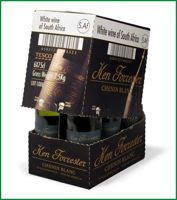 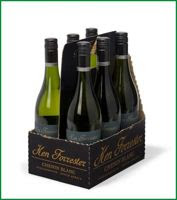 For my forthcoming speeches at ECOPACK '08, I put out a call via the IoM website to ask for examples of second use design.

Here's the first to come in.

My car currently has three purpose built efforts from Morrisons, whilst my desktop filing systems uses 6xwine boxes I collect separately to support the cereal box dividers within.

So I'd say this was a pretty good plan.
Posted by Peter at 10:09 am No comments:

Couldn't agree more with Dr. Thompson. Though why it is an academic issue... still... now... rather defeats me.

But then, I'm only a consumer. 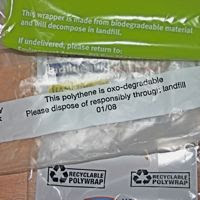 I just wanted to share this morning's mail delivery. And (left/top) the week's so far.

In it were three magazines, two of an eco bent.

Now I understand all the issues faced in safe delivery, so I am not going there.

What is more of interest to me is the disconnect between all those who should be dealing with this, from the suppliers to publishers to consumers to waste disposal entities, commercial and public, for profit and legislative.

Two of my haul claim to be safely disposable in landfill. Rather confusingly (well, to this consumer) one is oxy-degradable and the other biodegradable. Same thing?

The other is 'recyclable'.

Now I know enough to wonder whether the landfill-friendly efforts are only going to work if processed properly. And that by being mixed with the other the whole thing is probably a mess anyway.

I doubt many would be even so troubled. And in the absence of any information to the contrary, or mechanisms to deal with it properly anyway, it's all going in the same basket, and I'll then let the supermarket decide this weekend when I stick it in the bag box, or the swimming pool carpark skip's plastic bag binliner.

Not, I imagine, the best enviROI, really.
Posted by Peter at 9:26 am No comments:

My ad agency had a motto: Quick. Cheap. Good: pick any two (and whatever happens one will always have to be good)

It came to mind as I read this: Backlogs threaten Government targets for renewable energy

So we have a target or two. That means the timing is not negotiable. So... I'm guessing the price will be going up even more than antcipated, which makes my enviROI concerns even more presssing.

Or, of course, quality might suffer. Hope not. But in meeting a target today there is a dubious history already of leaving the mess of tomorrow for others to clear up.
Posted by Peter at 8:55 am No comments:

News, Views and what you lose

I share this for a variety of reasons: Boris's manifesto? He'll teach Ken how to ride a bike

It's actually about the debates between London's mayoral candidates. I almost didn't click on as that's not what the headline link seemed to indicate. Interesting choice from a paper accusing others of not taking issues, such as Darfur/Olympics, seriously enough.

And having read on, unless it was the reporting, I have to say just how thin the whole 'enviro' claims came across, especially when set against the demands of running and funding a city of several millions.

I'm not sure that, and this is as quoted in the Indy remember, 'Vote Liberal Democrat for lower fuel bills –and feeling cold', is the way to win hearts, minds... or votes.

I was tempted recently to get a biosphere.

It's one of those do-dads that is a sealed globe that mimics the earth's eco-system. Though I suspect without a few complicating factors, such as animals... and especially the human variety.

It set me to thinking a bit about some of the ideals put about, especially by those who see nature as the best architect and homo sapiens as the fly in the ointment, rather forgetting that we are merely part of Gaia's grand design.

So I just pondered an arbitrary, isolated area sustaining 'life'. Ignoring more global factors, the sun shines, it rains, the seasons change. The plants grow. Herbivores graze, and the availability of food and water regulates their numbers. And, just for good measure, predator carnivores do that job too, with a bit of Darwinian culling going on to on the herbivores and between themselves. On balance, that seems to work. In times of plenty, numbers go up. And in times of hardship they go down. And whatever happens there is an upper limit the land can, and hence will sustain.

Then along comes man. Well, the first to go will be the predators. For a start they are dangerous, and then for another they are competition. Next to go will be the herbivores, at least if they need the land man requires to live upon and grow crops (though we may keep some for burger purposes). And then we do what we do best. And as our numbers grow we occupy this finite space more and more, and cleverly squeeze more and more out of whatever remains to sustain ourselves.

But... and here's the rub... there still has to be a limit. It seems odd that so few seem to have admitted, much less addressed this notion.

Anything else, from plastic bag bans to renewable energy subsidies, seem more tinkering (albeit profitable, at least short term and just to some) simply to buy some more time.
Posted by Peter at 8:05 am No comments: