I like Newsnight, One of the few progs with teeth. Just watched last night's on the PC.

And lo, the blog allowed me to kill 3 birds (is that a PC-accepted phrase anymore?) with one email ('scuse the BB repetition; it's been a busy week).

"Just watched the programme on my PC – nice feature, well done (which has a bearing on the first of today’s topics).

I was transfixed by Ms. Wark’s interview with, one presumes, the guy who signs her pay cheque. But at least one of them had figured out who funds it. I’m afraid I don’t think he came off too well on this. Without rewinding to review again, I came away with two main impressions. One is that the choice is seen by him to be between ‘quality’ and toys. While they are a factor in the former, I’d have also thought numbers of bodies, how efficiently they deliver ‘product’ to consumer and what they get paid to do so would be worth looking at too. It may have helped to swing those of us not on indexed-linked salaries with competitors at every turn, and who wonder why it requires a UK reporter (and crew?) to go to the other part of the world where there is BBC representation, to film a 30’ filler on global warming. It is classic civil service ‘empire-build first, delivery later’ thinking at its worst. We then come to the matter of salaries and bonuses, especially at the top. What is the point equating the BBC with the private sector? It operates totally differently. And I’d imagine anyone going into it at executive level would know that. The compensation for not dripping in cash is (was) security and the chance not to dig through the barrel base further and further in search of the ratings to justify one’s fiscal worth in comparison with the private sector. As with ‘stars’ such as Ross, Moyles, etc, I simply just don’t buy the argument that you have to compete by playing ‘this any price talent’ game. Working for the BBC gives you access to a whole country in developing the skills (and in terms of stars, audience) upon which to forge very nice careers internally or onwards. It’s lazy management, and nothing less, that leads to clinging on to existing staff no matter what, when a simple ‘Sorry, we’ll miss you’ could suffice. And don’t come back with that ‘we need to attract top talent’ argument. It’s out there. You just have to stay on top of where it is and be ready to move.

I normally wouldn't give this a microsecond's thought, let alone commit to keyboard, but as our nation's finest pols, NGOs and media have decided it is more important than anything else (unless a tornado whisks the BB house to Oz), why not me as well?

I have two words to offer: AGENDA and EDIT.

From the media company that sets this up, to the media that feed on the controversy so set up (as if they didn't know), how anyone with a brain can assign any significance to the words and actions of a vetted and selected and manipulated group of human extremes is beyond me. It's like watching a show called BIG BOMBER and getting in a lather because all the guys with (I'll avoid any potentially un-PC or pejorative descriptions here) huddle around in one corner discussing hair bleach and exotic dinner ingredients whilst looking ominously across the room at the lone US Marine popped in to see what happens.

And should things not quite work to the full requirements of the AGENDA, there is always the EDIT. You can leave in, or out, what serves your needs best. Leave to simmer, and serve.

The day people don’t notice and discuss differences (I’d prefer celebrating them rather than trying to homogenise us all) between each other is when we are all clones, and even then I’m sure we’ll still do it.

Pathetic. Shame on the whole sorry cabal involved and feeding off it all. Including those rushing to be offended, preferably on a guest slot.

Gosh, dilemmas. I don’t envy that poor chap from Innocent. I wonder if he imagined he was running into the same kind of deal as the DG? Here to stick it to Tescos (maybe not: they are a supplier, after all) and find oneself lumped along with them in the nasty capitalist expansion stakes. Not quite the same, or fair, to be so simplistic. but Ms. Wark did raise some pretty critical issues.
If we really are serious about this planet saving thing, we to grasp that there are lots of us, getting to be more and more, most of whom have little else to do than earn, aspire, and hence purchase in an upward spiral that has only one end point that I can see, if left unchecked. So while oodles better than a Tesco air-flown mango I’m sure (if a few aisles apart), as a clearly ethical business that started in a fair stall and now is expanding globally, making and distributing and all that stuff, it must be hard to weigh the various considerations.
I myself suffer the same daily concerns with my business (it’s very hard to create anything new without adding to the environmental costs), and often find myself shy of the ideal by demands of family and immediate, vs. far, future. But I do try and avoid getting hit by my own boomerang and mouthing off too much on what others should do whilst not doing it myself (a long, growing and depressing list developing in this regard), and so far have managed to produce a service and, with luck soon, products that actually serve to reduce or reuse when they hit the marketing stream. And not a target in sight!
Finally no, I didn’t rush into carb-con offsetting either, but fear that the essential wisdom of something like this has been tainted in the public’s eyes by some much-ballyhooed efforts being poisoned chalices or schemes designed more to serve agendas and salaries than any decent, global (Kalahari bushmen breathe the same air we’re thinking of trading) environmental ROI. 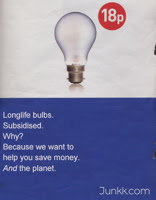 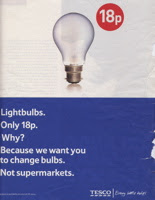 I think we need a new colour: Greener than green?

It's hard to keep up with it all, much less make much sense of it. Maybe that was the intention?
As I listen to last night's Newsnight (can't believe Ethical Man's piece has been called 'Costing the Earth') on the same subject, here's a selection to choke on along with me as I try and digest it all:

Interestingly, as I write, I listen to one of Innocent's top bods struggling to defend their ethical stance that they actually exist to sell more and more, which causes more and more carbon. Interesting dilemma. I wonder if he felt it worth appearing.

Finally, I note that Tescos are planning on selling half price energy light bulbs.

I add here an ad (and their les than green original) I worked up and sent their marketing people over two years ago with a pitch for Junkk.com. I guess this is their reply... nick it.
Posted by Peter at 3:50 pm 1 comment:

Talk to the man himself

Here's what I wrote:

"What about supporting other areas of environmental good practice, such as repair and reuse?

There are sites such as http://Junkk.com which are trying to find second uses for your products as they are now in the first instance, and maybe later on could encouarge you to build in (or ask your suppliers/brands to do) second uses to the design.

And the best part is, it could add a new attraction to the product for almost no extra cost!"
Posted by Peter at 10:43 am No comments:

Who will rid us of these troublesome, self-appointed celeb/pol/regal mouthpieces of planet saving, who almost all make me want to buy a Hummer to drive to the airport to fly to Australia to plant an oak in the desert and then get surprised when it croaks and lets off methane decomposing.

I think I was a tad more polite in the post:

"At least at the bottom of this post there are some carbon-offset (one presumes legit and effective) ads and, rather wonderfully, Tiger Moth flights & Queen's 80th £5 coin sales. At least at my cycle of reading . Buy 19 of them and she can hand the keys to junior and he can get there on his own!

It’s all a matter of degree.

I hope he feels his advisers are worth the money they cost us, and his standing as an eco-spokesperson. Tony Blair has already blown his cred (and that of the govt. he heads and whose messages we are meant to heed and follow) to prep his next career's travel requirements hypocrisy-free. And I'm sure Mr. Yeo has a good explanation for his private flight enthusiasm not so long ago, and the entire Lib Dem party are flogging their big cars (to keep on pumping out the gas in new hands) and buying new ones (to add still more).

Meanwhile the rest of us are to take what exactly from such examples, and do what by them?
What they say. Not what they do. Apparently.
I think we need new, and more credible role models.

I think of course HRH is entitled to fly. How else to do his job? But I think for such a thing he should do at his own expense and slap down such silly spin from his munchkins (most of whom can stay at home rather than trying to jump on a jolly) to try to justify it. And I think to gain some credibility back for his beliefs he needs to weigh the positive promo of such awards (or any other eco-adventure) to the negative such bad publicity inevitably attracts if it’s not well structured. It's a fact. Like having an Aston and a Prius. It's going to happen, Assess the bigger picture. Or maybe the chance to schmooze with celebs like Al is just too hard to resist vs. setting an example?"

Indy
BBC - note a slight similarity in the reporting?
Telegraph
Posted by Peter at 9:53 am No comments: