Talk about an incentive!

Which, as you know, floats my eco-boat! Try this: Cycling assessed at 20p a mile by IR.

Email ThisBlogThis!Share to TwitterShare to FacebookShare to Pinterest
Labels: CYCLING

A new category for when I get a potentially worthy bit of PR about a media event (eg: TV programme) that may be worth a gander.

All the usual caveats as to possible green bandwagon vs. enviROI value apply, I for now simply cut & paste editted highlights as provided.

The Woman Who Stops Traffic

Get On Your Bike to Pledge Regional C02 Emissions Cuts

To coincide with the start of a compelling new three part series – The Woman Who Stops Traffic – Channel 4.com/green is launching an interactive map of the UK to track which region can come out on top for CO2 emission savings.

The online interactive UK map highlights the amount of CO2 emissions people can prevent in their region if they walked, cycled or used public transport to do any daily journey. Users can pledge how many times they will do a journey without the use of the car (based on the output of an average family car) and their CO2 prevention will be added to the map for their region.

The site will go live on the 26 February.

The heroine is one Kris Murrin, who says: “I’m not anti-car. I’ve got three kids. I’m a family of five. I’m not exactly going to be able to do a huge weekly shop on my bike. But the thing that bugs me is that a lot of people get into their car without even thinking ‘Is there another way I could do this journey?’”

New category. Stands for 'Green Elites', and isn't meant in a good way.

Don't mind anyone with money, power, privilege or media connections caring about the planet.

Do mind, awfully, when it comes across as just more than a little insincere, disconnected from reality, exclusive, up-a-pedestal, self-indulgent, etc...

And more about filling some column inches with one's life to impress one's mates, than any real effort at making a difference. Ok, yah?

Times - A green battle at home

Just wondering... does one know any eco-hapless couples who live in a Midlands flat, but whose weekend options might not have included hunting the lesser-spotted Bruni on the estate?
Posted by Peter at 12:36 pm No comments:

...but you can just end up coming down on neither side: Tories ditch green taxes

See, this blog is balanced; we think they are all useless. However, it would be nice to see one of the sorry crew in Westminster (Greens excepted) take a principled stand and stick to it, whilst finding ways to balance the two 'E's (see labels).
Posted by Peter at 12:25 pm No comments:

Killing two birds with one turtle?

I think I a mixing a saying with the death of a famous Greek, but hey.

I tuned into BBC Breakfast about 10 times this morning over 90 minutes, and every single time all I ended up with was some BBC brunette airflown in to flounce around the post-Oscar bashes.

It was obviously getting desperate as they they couldn't find any frocks on anyone remotely relevant to talk about, so they decided on talking about hers.... again... and again.

I'm surprised they didn't do the turtle thing (missing irony is pretty common with the BBC when it comes to 'global warming'), but given their commitment to serious journalism I am sure they could have got one on a skateboard eventually.
Posted by Peter at 11:39 am No comments:

An interesting article from The Indy, highlighting the fact that the new housing minister, Caroline Flint, will announce later this week that ALL new 'non-domestic' buildings must be zero carbon by 2020. On top of the existing commitment to ensure that all new domestic properties are zero carbon by 2016 (strange, I was convinced that they said 2012 when that was first announced), that's an extremely ambitious target.

Let's see. Targets set by pols tend not to be overtly fixed and have a common habit of changing over time. And I find it rather odd that this sort of announcement comes when the grants system for renewables seems to have been deliberately halted.

By the way, this article suggests that we were wrong about how many new builds had qualified for Ol' Golden's much lauded stamp duty exemption, they reckon it is only three!
_________________________________________
n.b. I will be exhibiting SolarVenti in the Green Shoots Pavilion at the EcoBuild show for most of this week. Peter, I am sure, will continue to dig up interesting items for your perusal whilst I am away.
Posted by Dave at 9:52 am 1 comment:

It's seems a tad fraught, at best.

But it seems worth having a new a category to see what's out there and try and get to a view.

Indy - NEW - Fairtrade sales double to £500m as supermarkets join trend
Posted by Peter at 9:52 am No comments: 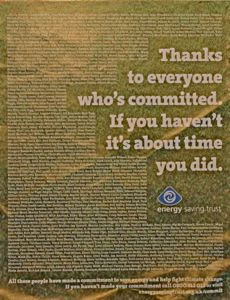 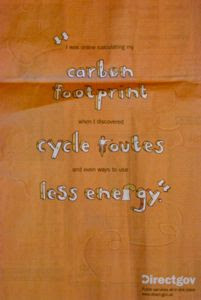 As some may know, I spent much of my life as an ad man.

So I know what it takes to get an ad in front of the right audience in the right way.

Beyond the vast amount of (expensive) person hours involved in creation and execution, there is also the huge media spend. Colour pages in Sunday papers do not come cheap.

So in the great enviROI scheme of things, I was just wondering what these two beauties were intended to do, and whether they even came close to doing whatever it was that was actually intended. And whether they were worth the money for a single inseration now decorating the bottom of a parrot cage, when that money could have been better invested, well, anywhere.

I defy anyone to tell me what the Energy Savings Trust one is about and what you are meant to do. The Direct Gov's message is clearer, but I remain unconvinced that this really will have motivated many to, well, do whatever they are on about.

This kind of advertising, at least in this form, is vanity stuff, pure and simple. At best it is serving to add a bit of profile to the various departments in some kind of comms budget p*ssing contest.

But with such executions there are no winners, and by diverting funds from where they could do much more good, there are a load of losers. Us.
Posted by Peter at 8:44 am No comments: