For every snake... a ladder 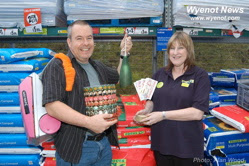 But seriously folks, who needs the dubious accolade of an international competition seen by mill... well, a few thousand... and a Prius... when you can be regional Green Champion (I can't quite get on with the 'hero' handle) for FOCUS DIY.

Actually I was being a tad bitter, twisted and sarky there, but in many ways this is here, now, real and does really mean something. For a start, £125 in vouchers (see 'em there in the Squidstand holder I designed and made for the occasion. You may notice I also dragged along and got into shot as much else reused as I could carry!).

So far these shots have made it to Wyenot.com, the local online news of the guy commissioned to take 'em (and who has some nice words, ta very much). But I am hoping that these will radiate out at least to the rest of the patch my 'award' covers.

Now you can cast your votes

for the worst examples of greenwashing and EU lobbying.

I assume that this is a rather tongue in cheek, whilst exposing some of the worst cases to a greater public view.
Posted by Dave at 11:49 am No comments:

A little while ago some chums and I made a TV commercial for a contest (oddly, in that it was 30" and we cut to that, it is now ":60 to Save the Earth" ecospot). Seems we didn't get into the finals. So now it's free to use, here it is:

As a creative soul, and in the spirit of unsweetened grapes (it's all how you say it these days), here's my purely subjective review (hey, it's what blogs are for, and I've found that playing coy gets you nowhere) of what beat us:

1. Are You Game? – First up. Mentions Al Gore. Twice. Darn, should have thought of that!

2. Change the way you think. – Some nice imagery, I guess.

3. Cheeto and Vinn – OK. Singled-minded and funny. Gets the point across. I’m wishing we’d gone the 60’ option now.

7. Green – Nice. Yet one of the lowest ratings so far.

10. Lights Out – OK, so it’s campaignable. Worth two in the finals?

14. Small Changes – I’m just guessing, but I think going with plastic bags would make one a shoe-in.

16. Support Good Hot – Energy – Interestingly, only the first that seems to have had some production money on it. The line ain’t worth it.

19. The Sky is Falling – Some more production bucks. Not a bad line. Motivated? Highest rate to date.

20. Think Again – Yeah, well. The money is coming out now. Where from?

22. This is the World – Or... don’t cut a tree down that’s already doing its job. Nice production on low budget, though.

23. What Can Regular People Do? – Follow more lists. It works in creative eco ads, anyway.

I still think ours is... was pretty good.

A simple ad for a simple notion: green IS good, but only if you really think about all aspects very carefully.

Many of us have bought into the notion of offsetting the carbon consequences of our lifestyles. And it is certainly better than nothing, But only so long as the initiative is worthy and well run.

Some schemes still operate on the basis of planting a tree to achieve a balance that will be unlikely to make itself felt for many years, if at all. And time is of the essence, as tipping points are being talked of in terms of decades.

Some of these can of course still be viable and good to support. But, as with all things sold in the name of ‘green’, one needs to always challenge such efforts to justify their environmental value, their envIROI (which is not the same as monetary ROI, as you can make a financial investment in our kids’ future that may not pay back monetarily) before committing hard-earned, and highly useful, funds without thinking, simply to ‘buy-off’ a sense of responsibility for one’s actions.

The facts of deforestation and national emissions of the world’s current greatest greenhouse gas polluter are a matter of public record. The logic of where our priorities should lie in this instance, are our own. There will be hurdles, to be sure, and this is of course a plea more for preservation rather than reduction, but we think it is one worth making, to be considered and, if necessary, sensibly debated.

Other than a bit of time, this ad cost nothing and used no resources... at all. Which is quite an ideal metaphor for the message being conveyed...

IF you think about it!

ps: No trees were harmed in the making of this commercial. But a nice weed didn’t make it. Sorry.

Maybe I should have been nicer about daft celebs and meaningless platitudes. They were the judges after all. Maybe not so daft to see who it was aimed at.

Which reminds me, it's the Green Awards to... night? I entered last year but decided against this ever again having seen who the judges were (for a creative contest - even if it's a people's choice, which I often prefer, there is always pre-selection... and agendas) and what they voted into the finals.

Here's one that may win there (it shows a lady's naught bits, which always helps, if you're being viral.): http://www.green.tv/brazilian
Posted by Peter at 11:16 am 3 comments:

And maybe they'll deliver to your door in person! By hybrid!

Time for a picture.

This little button has been popping up on a few articles I have perused of late in such as the Indy, Guardian, etc.

It's for a hybrid. Which, as we all know, must be better for the planet.

Maybe so; maybe no. And I doubt the brochure will do much other than err on the first.

Thing is, and here's why I write, I can't really find out unless I get the brochure. Excuse me, brochures. And guess what? A PDF download doesn't seem to be an option.

What does that say to you?
Posted by Peter at 10:31 am No comments:

And what a state it's in!

BBC - state of the planet

Next post down: 3m extra homes 'still not enough'
Posted by Peter at 10:15 am No comments:

The predictability of global warming is ..... uncertain

How much the earth's climate will change as a result of global warming is unpredictable.

Well, tell me something that I didn't know.

This from National Geographic News reports on a new study which looks at the levels of certainty involved in calculating estimated temperature rises as a result of us humans continuing to pump too much CO2 into the atmosphere.

Now, apart from one or two crazy luddites, we all accept that CO2 is a greenhouse gas, and we all know that if we continue to pump ever more into the atmosphere then there is going to be an effect. All the scientists and climatologists tell us that this WILL cause a rise in the temperature of the earth's biosphere. What we don't know is just how much temperature rise equates to what level of CO2 there is, hence, at least to some extent, the endless stream of tis/tisn't arguments, and counter arguments that the earth is not doing anything different than it ever has.

The majority of scientists (the consensus?) tell us that temperature rise is bad on a rising scale, a couple of degrees perhaps maybe OK, but too much and we'll all fry, along with most of the other flora and fauna. (Hence recent headlines warning of mass extinctions.)

What we don't know is just what constitutes too much, the models are so complicated and involve so many interrelated variables that no computer model we can currently produce can provide any answer with any degree of certainty. And that's without starting to factor in natural feedback systems and amplification loops, which make it impossible to predict future temperature rises with any degree of accuracy at all.

All in all the 'science' of temperature rise prediction is a huge can of worms, and those of us not endowed with brains the size of a planet simply have to accept what the scientific consensus tells us, that the numbers are uncertain and that they actually don't know, other than the temperature IS going to increase.

Fossil evidence through geological history over 100's of millions of years shows us that in cool times, flora and fauna have multiplied and genera and species diversity has increased rapidly. It also shoes us that in the much warmer periods, many of the planet's life forms disappear, and that in a few, very short, very hot periods, life forms have almost been wiped out entirely (90%+ of all life forms in one catastrophic event alone). [And that's without mentioning what humanity is already doing to our current flora and fauna.]

Now I'm no scientist (well, in comparison to most of the clever people out there researching away on all of this) but that still worries me significantly. We ARE warming the earth, we simply don't know by how much, or if the temperature rise will accelerate due to natural feedback systems. What we DO know, from fossil evidence that more warmth means less life forms, and that excessive warmth means but very few life forms survive.

Now surely that's a compelling case for looking at reducing our CO2 emissions now, rather than risk hitting some sort of temperature acceleration point in a few decades or so? The science of predicting global warming temperature increases may be uncertain, but I'm pretty sure that if we sit and do nothing, then the consequences appear to be rather dire.
Posted by Dave at 10:13 am No comments: