All through my ad career I always got my best briefings on the client's product not from the marketing guys in their ivory towers, but from those in sales. The ones dealing with the thing, and customers, day-in, day-out. Who I dubbed 'the sharp end'.

They knew the product backwards, its foibles and fabluousness. Plus, of course, the audience.

It's the same with the world of engineering repair.

For some reason, we are going through a spate of break-downs at Junkk Towers.

Age the primary reason. With which I can identify. But also poor design.

Luckily, our belief in repair has meant we have invested in insurances to cover such eventualities, even though I suspect we are paying more as a consequence over the lifespan of kit we're nursing things along.

And this means I have been happy to meet, and chat, with a bunch of cheery guys who know their kit backwards... faults and fabulousness both... as they sort 'em out.

I have just bid farewell to Dave who fixed our oven. A sticky fan was a fuse blow away. But in replacing that I also gleaned a ton of other useful snippets. Seems insurances don't cover self-tapping screws pulling out as 'rust' is excluded. On a device meant to create heat and steam in a steel box that seems quaint. But he was up for a quick bolt substitute.

In passing, he also noted the hob burner rings were now too old to be efficient and needed replacing. These are the metal plates that create the mini gas jets in a circle. Worth investing on new ones for more gas efficiency.

Sadly, with a fried circuit board in the microwave it was deemed easier and cheaper to buy a new one than replace. Good job we still had the 2-ton mechanical monster in the basement. And it works.

But today's tip concerns knobs. Specifically the on/off switch to the washing machine.

I thought it was broken and had booked a repair. Dave knew better.

And his solution...? Spray furniture polish. Worked a treat. I suggested WD40, but he said the polish was better, and smelled nicer.

I just put the phone down to the insurers. That's a van and man not having to come out Monday. And a little bit of planet eased along a smidge better as a result.

What a nice email greeting to start the day:

Before you bin anything, stop! Find out if there is another use for your junk, and save money, time and the planet. Or maybe you have some suggestions for what other people can do with their junk? Browse some wacky ideas at http://www.junkk.com/ - just click on the 'Ideas' tab. Best Wishes, Rita @ Friends of the Earth

The FoE daily tips are nice enough - free, fun and useful - in their own right, but when one becomes the subject... better still!

Well worth signing up for.

WHAT DOES THE TEAM THINK? - Paper logs

This is a new 'regular' heading.

Similar to Prof's Posers, but seeking to tap into the vast seam of common sense and DIY innovation out there, rather than pure science.

That said, a hint of enviROI may creep in, still.

For Xmas, I was given a paper log maker, well worth a Google of that term to see extent of styles and prices.

Now, as the video attached shows, it is not brain surgery. Takes me back to my papier mache days, if without the glue.

It's a metal box that you stick wet paper in and compress into a brick. Then leave to dry.

Now, I am fully aware that there are some aspects of this that will require effort, and to maintain the eco aspects, it best be human.

I am working on the compression side too, but production line aspects rather mitigate on this being too involved, or long in duration. Unless these things burn for a long time, that is a lot of input for about 30 minutes of fire, equating to a log of that size.

Where I am interested is improving the production of paper mulch. Yes, I could sit over a bucket and rip up old papers and card, but that is not looking a great option.

So far I am stuck in an electric rut, from the office shredder to the leaf blower to the twig cruncher.

I am just wondering if there is a brain wave out there on something hand-cranked, which can turn a lot of paper and card into a lot of shredded stuff. All to then make into logs... one brick at a time.

Oh, and from that video... not sure if adding bleach is that eco in the planetary sense, much less economic. May pass on that.

Thanks to some nice early input in the comments, a new option in complement at least is presented, which I will be scoping asap, and will then report further: http://www.logmaker.org.uk/
Posted by Peter at 3:39 pm 2 comments: 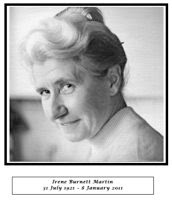 Peacefully, in her sleep, after a period of a few months' unfortunate but still happily comfortable and pain-free consignment to her bed.

Beyond all she gave our family, she unhesitatingly helped without question to keep Junkk.com going, and will in so many ways always still do so. Her belief in the concept has been its bedrock and got us through some difficult times.

It's a legacy we hope she will have taken with her that will always be tangible, and mean a lot to all who have, are and will continue to benefit from a small way to spare wasting anything unnecessarily. Something she was most concerned never to do.

That, and having the cheekiest sense of humour to delight all who knew her, right to the moment she rejoined her life partner and soul mate.

Sorely missed. Never to be forgotten.

Junkk First Lady Joan has kindly created a special page to carry evolving news and information for any who new Mum - http://www.firebird.com/irenemartin.html
Posted by Peter at 6:20 pm 2 comments: