A lingering whiff of Davosness still in the air

'The message, it seems, has finally gotten through: global warming represents a serious threat to our planet. At the recent World Economic Forum in Davos, world leaders saw climate change, for the first time, topping the list of global concerns.'

Topping? While it may have made it above whether or not to have the rose with the airflown strawberries, I'm not sure I read anywhere that it topped very much of anything, other than deciding it's time for one and all (pols, NGOs, biz, media) to move beyond mere rhetoric and act... as in how many acts are there in this farce?

I listened to John Humphrys' interview for Today with 3 of the 'top business leaders' - http://junkk.blogspot.com/2007/01/enjoy-today-tomorrow-is-looking-lot.html - and came away aghast. If that is what passes for leadership, Davos-styly now, we are toast.
Posted by Peter at 4:09 pm No comments:

Taking the point about counter-productivity, it is however worth considering that examples are good things to be set.

While Richard Branson is simply one of many airfleet owners (and got a lot of PR from his towing them to the runway and claims about bio-kerosene... which seem to have passed into history) at least accepting 'things need to be done' (and, at least, putting some money where his mouth is), I would point out that he is also something to do with sticking half a dozen rich tourists in a rocket to look down on the planet they just pushed a smidge further to oblivion. I write this on the presumption that the intended propellant will be greenhouse gas-creating in its consumption.

If it's by catapult I'll apologise.

Speaking as one a tad put off by such antics, I do wonder if the creation of a green elite ('You may call me Nobel' Al, Tony 'it's not really practical not to when I'm hitting the lecture circuit' ' Blair, 'My other car is a Prius' Anycleb, etc) who 'need' to fly the world to spread their message 'as it's their job', may not be having the level of inspiration that is intended on those not so blessed with the fame/money luxuries of choice?

Having watched Total Recall, I'm a tad dubious about stuffing big blocks of goo under the ground, in case they leak back.

For now I think I'll go for the tree thing. Sounds promising. Unless some carb-con credit traders decide to horn in on the deal. Whoops, I think they already have...
Posted by Peter at 3:09 pm No comments:

Are you really buying British?

But what is the poor consumer to make of it all?

Elsewhere in the blogosphere today we have that actually your Valentine's posy from Kenya is better than the one from Holland because it wasn't raised using artificial heat. So food miles are not enough, if your concern is more enviro that nationalistic.
Posted by Peter at 12:32 pm No comments:

Email ThisBlogThis!Share to TwitterShare to FacebookShare to Pinterest
Labels: FOOD

The people have spoken - so what? 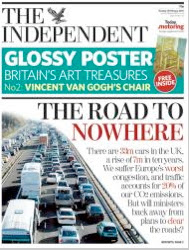 Embarrass a minister? How does one do that? They are gold-plated, index-linked, unfireably (actually in Mr. Blunkett's case that's no true, but he did turn it into a nice earner) immune from the consequences of their actions... or inactions.

"...he said that many of the claims made by those promoting the petition were “falsehoods”. He promised that there would be safeguards to protect motorists’ privacy and that the system would not be used to catch drivers speeding."

Speaking of falseho... errors of omission... this is followed by..

"Mr Alexander did not offer assurances that the scheme would not raise the overall tax burden on motorists."

With a slight silence on the main point, which is most motorists don't trust the money raised to go towards improving transport infrastructure.

Trust is wearing thin, guys, and no amount of smoke and mirrors will avoid that.

And as we are juggling numbers, a million is probably about the number of legal (we'll ignore all the untaxed, insured guys they can seem to catch) drivers who were entitled to vote, did so, and gave this government their 'mandate'.

Telegraph - Downing St to email road pricing protesters
BBC - More road-charging debate pledged - There is an interestingA/V snippet off this that is worth listening to. from the headline I thought it was going to be about methodology. I after all have about 20 email addresses, so I guess I could boost any petition without thorough checks by simply using these. That said, the old paper one was equally subject to problems of checking. You could argue that it used to be more difficult, but in an e-age, why should that prevent feelings being expressed and supported.

Actually, the main thrust by an 'expert' (actually a guy from an industry in danger of being put out of business by such people power) was that it was only becuase it was from a well-organised lobby. Was it? I thought it was a guy who started a ball rolling. It is also insulting to say there are more important issues people care about. For me it was not so much road pricing, but ill-considered, inequitable legalisation being pushed through by self-serving pols. And that I do care about very high on my list.

'...going on to suggest that the signers were misinformed.'

How? I have also seen that notion floated that the level of response is as a result of 'coordinated action'. A guy posts on a petition and the people respond. What would they prefer.. a public funded campaign to tell us what to think?

Such crass attempts at dismissing genuine people power shows how out of touch these guys are.

I do believe we will need some sort of controls to manage traffic and emissions, but not the ill-considered, unfair and self-serving ones these bright young advisers and their political dinosaur masters have tried to stuff through.

I signed because I would want to see where my money went in helping transport, not to fill a hole in their index-linked pension plans.

This is typical sloppy reporting. I was interested to see who was doing the urging and on what basis. There's also a list of pros and cons. One I note missing is that there is no clear information on where the money will go.

Any significance that this is posted by the political correspondent?

ps: My Mum thinks my free reuse ideas website Junkk.com is fab.
Posted by Peter at 11:42 am No comments:

Subscribe to mine and you'll know lots of stuff about the environment, and especially bits that many mainstream journalists just seem to pop in from rehashed press releases.
Perhaps because they are all writing about each other.
But thank you; it was interesting to roam.
I'm feeling a lot of love here.
Posted by Peter at 10:42 am No comments:

Icarus would be proud

A Tory pledge to show they care

I looked at the picture of DPM and at first thought it must be a caption contest: "Think it will fly?" "Look Mum, No Hands".. etc.

But then I see it is a new trend in all-party (and indeed extending to activist groups and NGOs) pointlessness, designed more to boost databases and waste more paper at the eco-printers.

Isn't Pledge something that smells funny and adds a temporary gloss to something tatty and decaying below?
Posted by Peter at 10:32 am No comments:

I think my buttons got pushed

Pay for what you use... or in this case.. refuse... no problem (unless you are a politician. Ask Mrs. T about the Poll Tax).

Pay on top of what you are paying already.... big problem. That is not an economic incentive. That is a very uneconomic disincentive. And smacks of yet another not very stealthy tax grab under the guise of green to try and prop up runaway public spending on failed or inefficient systems, policies and campaigns (how many waste quangos dispensing how much to ad agencies do we now have?), imposed on those few making something (plus the poor, pensioners, etc) to support those who advise, empire-build (how many compost-awareness officers do we need?) assess, monitor, target-meet and beancount's gold-plated pensions and index-linked salaries.

While I can accept and admire the wisdom of such an approach and the obvious success elsewhere, I no longer have any faith in the self-interested, dis-jointed central and local authority systems and knee-jerk policy-addicted wonks who will try and fail make it all happen fairly, sensibly and efficiently, without mainly lining the pockets of those most able and least deserving.

I have a big house. I can stack as many RE-Boxes as the council issues in my cellar. My mum has a combo kitchen/lounge/dining area. So she needs to get stuff out as simply and quickly as possible. How do we make that work? It has to, but I doubt the fine-first brigade cares so long as they can whack a chip in a bin or give a dust-person the power to impose charges and fines on a par with a court of law.

I write this as one who produces almost no waste beyond that recycled and composted because I make things out of it using sites such as Junkk.com, which truly believes that you incentivise with genuine re:wards. A lesson those in power seem to have completely overlooked.

I have written to the editor:

We need to get a handle on waste.

But what amazes me is the massive gap between those who are being asked to address it (the public), those staked to help them (gov, local gov and NGOs such as WRAP, etc).

I have blogged on this further on your pages and my own site, and offer this cut-down for hard copy:

Pay on top of what you are paying already.... big problem. That is not an economic incentive. That is a very uneconomic disincentive. And smacks of yet another not very stealthy tax grab under the guise of green to try and prop up runaway public spending on failed or inefficient systems, policies and campaigns to support those who advise, empire-build assess, monitor, target-meet and beancount.

While I can accept and admire the wisdom of such an approach and the obvious success elsewhere, I no longer have any faith in the systems and knee-jerk policy-addicted attempts to make it all happen fairly, sensibly and efficiently, without mainly lining the pockets of those most able and least deserving.

It has to be made to work, but I doubt the fine-first brigade cares so long as they can whack a chip in a bin or give a dust-person the power to impose charges and fines on a par with a court of law.

If you'd like to discuss any further on how the war on waste is being fought more between us than on it, I'd be happy to share.

It's the thought that counts

How green is your (Valentine's Day) bouquet?

Your very own conflict diamond - £5000?
A box of non-Fairtrade choccies - £5?
Some slinky knickers from a sweatshop in Indonesia - £20?

A bouquet from our new 'green-awash' retail industry - Priceless!

Times - Why roses from Kenya are greener than the flowers from Amsterdam
Posted by Peter at 8:46 am No comments: