Even our lot are at it. This from ITN reports on how the UK intends to lay a claim with the UN to a million square kilometres of seabed off the coast of Antarctica.

This is rather against "the spirit of 1959 Antarctic Treaty, to which Britain is a signatory, which prevents all exploitation of oil gas and minerals, other than for scientific research."

But don't worry, because our claim will only be 'theoretical' for the time being. So that's OK then.

Addendum:
This from Guardian CIF (18/10/07) makes a couple of very interesting points on this very subject, not least the one pointing out that it somewhat reeks of hypocrisy....

"That's why the most reprehensible part of this latest "sea-grab" is that our government, while claiming to be a world leader on climate change, is seeking to increase its supply of the very fuels that brought about this crisis."
Posted by Dave at 4:11 pm 1 comment:

I read that what they really, really want is a Lear each in case of hissy fits en route.

If true, I'll be interested to see how that gets worked into the green agenda.

Guardian - If you wanna be my grocer

Mad - Will Tesco be the first and last Spice sponsor?

Speaking of getting 'on board', for an entity keen on 'looking' green at least, the predilections of Squander Spices will make for an interesting sell.

Hers and hers Priuses to the Lears to see how ethically the sweatshops are run?

It was only in looking at some stuff about Blog Action Day just now that I realised one could change the blog format. Well, D'uh.

So I had a play. Hope you like it. I think this clean style is more reflective of the main site.

If not... we can change. Don'tcha just love digital!
Posted by Peter at 2:49 pm No comments:

Not the word I'd use, but nice anyway 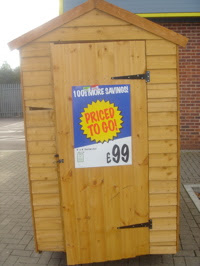 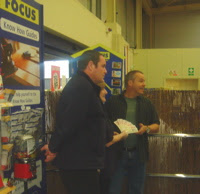 'Hero' is an awkward word to have applied, and after Jeremy Clarkson's notable VC winners' TV programme I have tried to avoid using it unless really warranted.

Hence it was with mixed feelings that I was surprised to find I had a) been nominated and b) won the regional round of such a thing in a competition from FOCUS DIY.

I was told a wee while ago, but have long learned to not get too excited until the cheque clears. Or, in this case, I got handed the vouchers. The missus was thrilled that at last Junkk.com has made some money until become apparent this was going on yet more DIY stuff (most likely the Forest Certified shed above).

Anyways, I came, I posed, I gurned. I even made a few suggestions on what to stand in front of. I gave a big thumbs up to the 3 for 2 insulation deal in one. And I got some Junkk goodies in camera.

I'm sure it will make the locals, but with luck it may go further.

I think that I will refer to it more as a Green Award, though.
Posted by Peter at 2:21 pm No comments:

Who is not aware of ad campaigns that had the realities of such as the ASA's procedures factored into the production shedules?

I was recently told of one guerilla ad/marketing/PR coordinated 'launch' that involved doing something designed to:

a) Get complained about (PR)
b) If that doesn't work naturally, make sure it does via a tame Daily Mail reporter
c) Make a fuss about being complained about (more PR)
d) Concede (even more PR)
e) Make a fuss of the compromise (yeah, you guessed it)
f) Try and score a puff peice in the Sunday's about how it all happened (yawn)

Did I miss anything?

It's often worth looking at just how large the print run is as this can still involve a cost disincentive if it is a full national.

Digital means so much can be a one off that is easily, and cheaply sacrificed.

Are they still eligible for awards if pulled?

Wise yes, but still poorly served in making good decisions. And the current situation serves the overall cause of better environmental practice and behaviours poorly.

You have kindly added, in the form of the 'FTSE 100 greenwashers and greenwinners' survey, yet another interesting if rather meaningless effort to muddy already murky waters.

At least M&S is at the top of this one, as it was in another I had, but yet another had Tesco tops. Three in one week. What's a consumer to do?

Probably, and I'm just guessing here, ignore the whole lot. Which makes them very expensive exercises in a thriving and lucrative comms industry that has little to DO with actually making much difference on the ground with the majority of individuals who matter.
Posted by Peter at 1:38 pm No comments:

As I have noticed a lot of the 'stopping asking questions, if it's green it MUST be good' flak I get seems to come from consultants/cies who offer carbon offsets as part of their paid day jobs, this caught my eye: Is carbon offsetting the solution? (Or part of the problem?)

Now, as with a few other eyebrow-tweaking phrases from those on the enviro desk at our major media, the obligatory start or end sentence gets me going every time: 'I feel guilty because as a privileged westerner with an addiction to air travel...' Not to mention all your other buddies, feeling less guilty, flying to wherever to cover whatever (Maddy, the latest fashion), or in the ad department selling space to the airlines. It seems... thin.

Anyway, offsets. That is what he came to Uganda to find out.

Because... he's fond of trees - he once spent two weeks trekking through the Bolivian cloud forest in search of one. Oooooo...k.

So we find out that Tom Morton, Climate Care's managing director, clearly finds criticisms exasperating. He acknowledges that some people in Kibale may have complaints, but says that when he travelled there recently with the Co-op's head of ethics, the community was happy with the way the park was being managed and content with their access to its resources. I am sure a great time was had by all. This is not proving any easy swallow.

I do not deny folk the need to earn a living. Nor do I censure them for it. I do get offside when others do... especially if it seems a little one sided on the sacrifice front between those doing the telling and those being so asked.

Actually in this case it seems a balanced article and we need to allow such journalism to happen.

But in a world without 4x4s, I couldn't help wondering how they would have got their convoy anywhere in a Prius. And I bet they weren't drinking tap water either.

Me, I think I'll stick with not cutting existing forests down for now. It seems more... productive.
Posted by Peter at 11:01 am No comments:

‘One person, one permit’ emissions plan

From FT.com, on an EU plan to allocate carbon permits on a per capita basis post Kyoto.

Every now and again you come across something that really makes you sit up and take notice. This, by Julia Whitty, featured on the Mother Jones (MoJo) site, is one such.

Its a fairly long article, and one I somehow missed back in April, but which I thoroughly recommend.

A couple of extracts follow, but please do read the article in full.

"A poll by the American Museum of Natural History finds that 7 in 10 biologists believe that mass extinction poses a colossal threat to human existence, a more serious environmental problem than even its contributor, global warming, and that the dangers of mass extinction are woefully underestimated by most everyone outside of science."

"All these disappearing species are part of a fragile membrane of organisms wrapped around Earth so thin, writes E.O. Wilson, that it "cannot be seen edgewise from a space shuttle, yet so internally complex that most species composing it remain undiscovered." We owe everything to this membrane of life. Literally everything. The air we breathe. The food we eat. The materials of our homes, clothes, books, computers, medicines. Goods and services that we can't even imagine we'll someday need will come from species we have yet to identify. The proverbial cure for cancer. The genetic fountain of youth. Immortality. Mortality.

The living membrane we so recklessly destroy is existence itself."

Feel free to tweak. Basically, I have a small issue with anything controversial that has a book (£18.99 from the Guardian) attached, and is accompanied (to the benefit of both main protagonists) with an author article in a potentially hostile audience's medium.

Hey ho. I love the smell of ratings in the morning.

Actually, I find much (not all!!!!) of what he says compelling. Plus the calm and balanced nature of his delivery appeals, vs. the near frantic hysteria of many who defend almost anything green that must be good. And as one who cops it a lot just for asking a question or two, it does make you feel like kicking back. So imagine how consumers, already being 'told' to stop fun stuff (and often by a load of folk, from jetting pols to fashion-conscious celebs to their remora-like chums in the media (love the skiing ads guys)) may be reacting.

Guardian - Cool it - is global warming a myth? - Surprisingly few posts... so far.

'Cool it - is global warming a myth?'

As it invites a slew of extremes from 'both' 'sides' to have an opinion on causes and/or mitigations, I first just ask a few questions, as I seem to see a lot of stuff in the media, from here to the BBC to what Al Gore did/didn't claim, or the judge on his case, or the IPPC, or...

I am interested, because all bar one (the one I favour, and the basis upon which I shape my actions) seem to set their 'all or nothing' advocates up for hefty falls (along with a few billion others). Plus they really don't serve the cause of persuading the vast, still unsure majority with reason and incentive.

If you only shout in argument, people tend to cover their ears. And that suits who?
Posted by Peter at 9:45 am No comments:

What did targets ever do for us?

The government has quietly abandoned its target to halt childhood obesity by 2010, setting instead the goal of reducing it by 2020.

Not enviro, I know, but just as easily could be, across a raft of issues.

Which rather begs the question... other than adding a whole extra layer of expense and inefficiency to the process, or make it easier to award bonuses (during, not on failure to meet) what do these things do?
Posted by Peter at 9:41 am No comments: