I recall, a few years ago when the latest disability legalisation came out, getting a bunch of what amounted to extortion emails from 'consultants', who had 'noted' that our site was not as compliant as it could be and would, for a fee, not report us.

I got rid of them all by pointing out that it had been briefed from the outset to be as all-embracing as possible (with a Bobby rating taboot), and if there were areas we could improve would appreciate being told where they were so we might address them. Why would I not? Reaching out in any way practicable - note that - simply improves our audience base. Never heard back.

So I must say that at the time, and still, the way it all got inspired, imposed and handed over to such folk with legislative backing really p*ssed me off. I even recall a poster on the topic, with a wheelchair-bound individual in a judge's wig, waving a gavel, saying 'We're out to get you!'. Not, I felt, the most engaging way to inspire cooperation.

And with a website, especially one that is user-driven, there are many factors afoot, from design considerations to how editorial may or may not get perceived by the majority of the audience, who can take a number-penalising hike if one panders to some demands.

Hence this struck a chord: eHarmony sued in California for excluding gays

Now I could care less what you orientation is, and our site is not configured to exclude anyone, save for the consequences of some disabilities that we really are in no position to address.

So, in many ways, should anyone choose to ignore the possible reaction of other users by failing to be all-inclusive, this simply seems a matter of 'why not?', closely followed by 'more fool them,' topped off by 'ignore the silly so and so's'.

eHarmony can obviously afford the changes required, but for a site of our size a failure to offer certain additional options can be financially punitive, especially when we are free to kick off. So demanding we add stuff at our expense would seem... unfair.

But it's more the principle of the thing, and now a gay bar in Australia has won the right to exclude heterosexuals it looks like there may be a slight unravelling taking place.

I'm all for protection from abuse, but this all simply smacks of a bunch of chancers trying to make a fast buck in the name of what should have been something noble, by abusing a poorly-considered bit of PC legislation (which seems to be most of them).

I fear there will be few winners bar the lawyers. As always.
Posted by Peter at 5:04 pm No comments:

Letters from the front, and at the back

A guy gave me his card the other day, and it really needed to be about a foot wide to get in all the letters after his name, some of which were.. a stretch. I afraid it all rather left me feeling that one last set was rather in order: Pl. Onker.

This ran though my mind today as I read my welcome letter from the Institute of Materials, Minerals and Mining. I feel like I have joined a Post-it note!

Anyway, it was addressed to [me], A Inst Pkg. How cool is that?

Now, at first blush it looks like I, as an aspiring planet-saver, have gone over to the Dark Side, lured by Darth Shrinkwrap, but I deem it a very worthy attempt on my part to try and engage with, understand and hence report on what is after all a very significant part of all Junkk.com is involved with.

All things considered, it's a pretty affordable membership I'm surprised a few other media who see fit to critique this industry would do well to embrace.
Posted by Peter at 10:57 am No comments:

You are what you read? 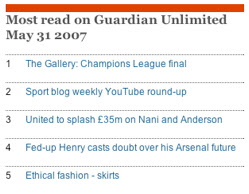 I was having my morning trawl through the onlines, when this caught my eye.

I simply note that, with all that is going on in the world, a cross-section of Guardian Unlimited readers gave the top four slots to footy, and the fifth to a fashion show.

At least it was ethical.

May is so over

I just read a short, but interesting piece in the Indy.

And without apology, but due accreditation, print it fullishly here, with a few highlights of my own:

All goods may be labelled with 'carbon footprint'

A new eco label may show the environmental damage done goods and services in shops. The Government has begun a "carbon footprint" project to work out how to count emissions from everything from crisps to flights [Let us pray the enviROI derived is genuine, and that we, the public, are able to get to grips with it such that it is not just another vast, money-sucking box-ticking exercise].

The scheme, which could be the first step towards an international standard [like all previous efforts at local - we seem to have two health standards already, so the packs are going to get pretty crowed with this guff - and global cooperation have been successful so far. No reason not to try, but I do trust the basis is not so much to line consultants' pockets in the effort as to actually move policies] for measuring the greenhouse effect, will [well, that's more positive] be used on packaging to allow consumers to weigh up [so it's back to us doing the tricky stuff again, is it? And doubtless fined if we don't do it right. What about a bit more effort on what goes into the system at the front end????!] the climate change impact [please.... make it an effective measure!] of different products [I... we... are going to stand there, assessing - if we are able - every item going into our baskets. This is asking us to weigh apples vs. oranges, literally]

The Carbon Trust, a government body briefed to create a low carbon economy [with how much money to be blown on salaries and comms, with almost no ROI and/or enviROI that is publicly accountable to an effective degree?] is developing the scheme with companies such as [why these guys? Are they enough? Are they being funded or helping out for free...if so big up to them. If not... hmnnn.] Tesco, Boots, B&Q, Marks & Spencer and BT. A panel of technical experts will take around 18 months [Dome. Olympics. NHS. Air traffic. Need I infer more?] to finalise the measurement of stages such as production and transport.

Announcing the plan yesterday, the Environment Minister, Ian Pearson, said: "Businesses are looking for ways [Looking's good. Finding is better. Committing the best] to reduce their impact on the environment. To help them achieve that we need a consistent way [Just like the health standards, eh?] to measure these impacts that businesses recognise, trust and understand." [Let's not forget the consumer recognising, trusting, understanding... and being able to engage with in a meaningful way, as well]

That's an awful lot of doubts I have raised from just a few paras. I wonder why? Maybe it is because this consumer doesn't recognise much so far in this area that has made sense, trusts little these protagonists do to actually have my kids' future enviROI at heart, or ever get shared in a way that is understandable of capable of rational engagement.

But we can hope this time it will be different. Here's hoping the mainstream media stay on their case (packaging pun intended).

In the piece I read, in the Independent, the announcement was littered with words like 'may' and 'could', which usually presages a lot of money getting spent on a bunch of consultants, and then sod all of any use happening once the requisite boxes have been ticked.

There is also the small matter of what happened with the health composition labelling. In some places we get a traffic light system, and in others a row of figures that look like the periodic table.

It's going to get pretty crowded on the side of each pack, and I have my doubts anyone will have the slightest clue what they are looking at, much less be able to make a coherent decision based on it. I for one have not bothered to scrutinise each item I select. For start, what am I comparing? Apples and oranges? Well, of course a Spanish orange may be better than a South African apple, but who on earth is going to get into that????!

If there is any serious intent to make a difference here, it needs to be at the in-point, not throwing it on the poor blooming consumer to try and sort out the fudge government and industry are trying to shuffle around.

Our children. Their planet.

I was going to leave well enough alone, but I do feel there are lessons to be learned from the plight of a little blonde girl and the fate of the entity which will, with luck, serve to sustain her grandchildren. If this is the best the best of our media can, or seeks to be, heaven (in its most faith-embracing form) help us all.

I just watched last night's 'debate' (the inevitable Newsnight book-end extreme twofer), and frankly even such as the BBC needs to look in the mirror.

Yes, there was a picture of the child posted at the beginning, but once that obligatory 'of course it's all about her' platitudes were out of the way the rest was anything but.

Other than a tad more 'awareness', which seems to be justification for anything the media sees a rating in, and for which the cunning or the desperate will willingly serve up the source material, I learned nothing more about what has been, is being or could be done to get this kid back. To actually DO something of value that will have a positive result.

Not that I believe there is such a thing as an expert (at least one who would subject themselves, their profession or their expertise to the trivial nature and possibly deleterious glare of any forum our media can create these days), I would have liked to know from some experienced sources if these tactics were effective, and how and where the media and public can be motivated to help effectively. Or, if considered more beneficial, belt up and back off.

Sadly, all I took away from this was, as pointed out here in this thread and, to be fair, somewhere in that odious, self-serving broadcast exchange, little to do with next steps to finding her and those like her, and a lot to do with the agendas of a bunch of folk I could really care less about and/or should know a lot better.

Meanwhile, as Mr. Paxman is inevitably prompted to say, time is running out, so moving on....
Posted by Peter at 8:37 am No comments: