OK, Gordon the 'green' PM. As he today announced a 'green revolution' of measures including the development of thousands more wind turbines and a push for much more energy from other types of renewables as part of a £100bn plan to boost renewable energy across the UK. Full story from the Beeb.

£100 Billion - now that's a serious wad of cash - how is the Gov going to fund it? Oh, "Household bills are expected to increase as a result of the measures". Ahhh, I see, we are all going to pay for it.

And who will manage the 'plan'? Well, I've just read it again and it is not really a plan, it's more of a 'vision' or even a 'strategy'.

So it all looks yet again like another vapour-ware initiative - all sound bites and no actual 'doing'. Not so much a 'green engine', more of a wisp of 'green hot air'.

Been there, done that, got the T-shirt; anyone else getting that old 'Deja Vu' feeling?
Posted by Dave at 2:44 pm No comments:

The image of rubbish 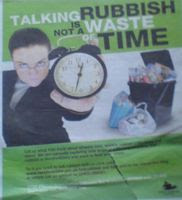 As an ad man I think I am pretty much aware of most 'techniques' used, and also what might and might not work.

It often depends on context, and the interplay of words and image, but I am not a big fan of negatives.

Look at this ad.

It's actually about a very good, positive thing: a consultation (here - if your are in HR and interested) on the provision of waste collection services in our fair county .

But really, given what you see here, would you want to be part?

Why of why is the comms aspect of our green agendas so expensive (that a full-page, full colour ad), yet so woeful?
Posted by Peter at 10:19 am No comments:

All the unfounded opinion that's unfit to broadcast

I today on BBC Breakfast News watched a possibly sincere but lightweight attempt at dealing with a serious issue: fuel costs and mitigating actions.

In the course of my morning viewing I saw two of the slots devoted to this.

In one a 'reader's tip' was read out to suggest I ran my car with a half-empty tank on the possibly rational explanation that one is lugging less weight.

Later on, another read out flatly contradicted this, saying the void left encouraged evaporation.

To be fair, the hapless reporter and studio reporters did rather lose it and suggest that 'maybe they need to find out'.

Much as I know the BBC is addicted to viewers' input, may I suggest that on matters of subjective fact, as a supposed news programme you blooming well find out what is the correct information FIRST before broadcasting it?

Or at least have informed, educated moderators to hand to put things in context?

Any commuter who left without seeing any clarification at the end of the programme (if there was I missed it) will now be either ill-informed or totally confused.

Which is about right for the state of green-related reporting and editorial on the BBC these days.

It's serious. Treat it so. And hire guys who know what they are on about.
Posted by Peter at 9:41 am No comments:

BBC - Parents 'stop children cycling' - Heart says yes; had says 'nice try, gov/media combo'. Took the boys out for a jaunt and almost got mown down. They will not cycle without me (not that I would have afforded much beyond a source of blood) until much older.

Guardian - The wheel of generosity - As interesting for where it is printed as what it is saying. And, if true, the numbers quoted in the post and subsequent comments do give cause to cock an enviROI eyebrow.

Times - Try cycling the wheelbarrow to work - an option, if you have the money and surroundings

Indy - NEW - Back in the saddle: Why the Government wants more children cycling to school

BBC Green - Biking for beginners
Sunday Times - Bike Clinic & Backpedaller
Sunday Times - Webwise: everything you wanted to know about cycling - Well, a fair bit maybe, but not all.
Sunday Telegraph - Maybe Cameron should take a taxi? - I include this less as something to add to any info on the joys and options of cycling, but more to show how, like Climate Change, it has become polarised (if not politicised) beyond any rational discourse.
Posted by Peter at 9:06 am No comments: