I think that was the strap line for the benefit fraud advertlet that I saw recently on TV.

Shame that HM Revenue and Customs can't seem to look after their own computer records properly. So Paul Gray, chairman of HM Revenue and Customs, has resigned over this disaster. They managed to lose the personal data of some 25 million people! Have they never heard of backup? The responsibility, and accountability, for this rests at ministerial level.

So, coming on top of the revelations about just how much government (i.e. read, our) money has been used to prop up Northern Rock ........ No if, No buts, Darling; just resign.

But that would require accountability, which does not seem to be a term that exists in the realm of pols nowadays.
Posted by Dave at 4:32 pm 1 comment:

These guys run on air!

I somehow missed this a few weeks back, but it's still worth sharing. We've all heard of ill fated attempts to create vehicles that run on compressed air, it's something that engineers have tried to do since the 19th century. Well, as reported in the International Herald Tribune, the time of the compressed air (and/or compressed air / petrol or electric hybrid) vehicle, may be nearer than anyone ever realised.

"One prototype, which looks like a big version of a Smart car, can top 68 miles an hour and, at lower speeds, travel up to 120 miles without refueling. Plug the car into an outlet, and the engine, in compressor mode, will refill the tank in four hours."

"The Scuderi Group, in West Springfield, Massachusetts, has a hybrid engine design that compresses air and burns petroleum fuel in separate cylinders and uses some compressed air to extend the petroleum engine."

It sounds like an awfully cheaper technology than any Hydrogen or fuel cell vehicle. It will be interesting to see what future developments bring.
Posted by Dave at 2:41 pm 1 comment:

Funny how the same thing can get seen very differently, depending on where it is viewed from.

As some may know, I no longer contribute to 'BBC is Biased' because of their moderation policy, which is every bit as selective as the entity they purport to critique, but I do lurk a lot, as snippets of value and even well-considered notions do still get shared.

However, bearing in mind my attention on last night's BBC Newsnight, and the general 'IPCC-(no) evil, speak (no) evil and hear (no) evil' from all sides since Friday, I found a few things of interest:

The set-up was that a Greenpeace fanatic was allowed to lambast a colourless government spokesmen for ten minutes on the theme that the measures were not enough. Not an alternative view in sight. To his shame, Paxman aided and abetted the attack, and 'science' reporter Susan Watts has clearly become the harridan cheerleader for Beeboid climate change fascism. '

Slightly before this, we have:

Yet more garbage from Brown and lapped up... [actually , a few fair points]

Yep, Friends of the Earth are no longer an independent organisation. As the 'eureferendum' blog [no link, so I don't know if it is true, which I certainly didn't know 'til now] pointed out, they are more than 50% taxpayer funded, and basically a govt/EU dept. It is disgraceful that the Beeb still treats them as independent, and simply allows all their claims to pass unchallenged.

The BBC'2 "expert" on the enfironment (yes that man with a degree in English) Roger Harrabin was spouting the Nu Labour bile... [Questions were asked]

I could go on. 'They' certainly are. And on. And on. At the moment it's back on a 'tis/t'isnt't MM/MWCC slugfest of absolutes... which as all who read this will know, I just love so much. Not.

What I do find interesting, and hence the reason for quoting here, is how one small microcosm of blogdom wants it all, all ways. I'm not defending the BBC at all here, as many comments are pretty bang on on its woeful role in all this. But mix in the government, activist groups (such as FoE, whose status - although as yet unconfirmed - was news to me... and not optimal to make them as credible as voices of 'balance' in debates) and media such as the Indy, Daily Mail, Guardian CiF, etc, and is it any wonder it's all such a mess?

All it shows to me is that you can never reply on one source, for opinion to be sure, but also fact. Some, such as activist groups and media extremes you expect it from. But our national medium and those we pay and rely upon to navigate our course.... sad. 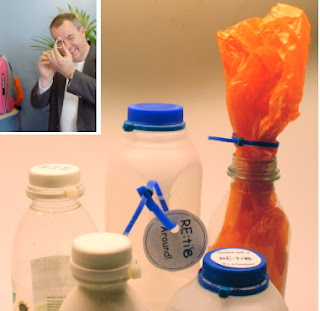 In one week I head for Belgium to try and 'sell' the RE:tie.

This piece in a trade journal caught my eye, and prompted a reply:

Oh, lordy... I hope so! I just one week, I step into a hall in Brussels (I doubt 'Caps & Closures' will seduce many bar the more committed, or keen, but if you or yours are there please say hi) having blown a small fortune on an entry pass, Eurostar (thanks to all the French strikers) and a nice 2* bijou pension quite near the Marriot (I hope), on the odd notion that if I need to meet (to market my eco-related packaging innovation to) those who deal in Caps & Closures... then this is where I need to be to do it in one efficient shot. But... what will it be? A dozen booths staffed by juniors there to sell and not to deal? Seminars with potentially useful speakers who will vanish as soon as they leave the stage? Me sitting next but one (I will say hi to the guy right next to me at the events and in the canteen, but glad-handing every person smacks of desperation) to the Marketing/Packaging/CSR Director of Tescos and not knowing it? And lots of huddled groups of industry insiders who all know each other and are there more to catch up and play golf than find out new stuff? Fingers crossed... none of the above. And, as you say, I will get to meet the guy(s) who are keen to steal a march on the future. But it does cost, and prohibitively so to those trying to visit. And it is only today, with one week to go, that the organisers have released the site to facilitate serious networking. Not much time when I am also trying to coordinate my mobile pitch. I wish it were easier... and cheaper, but nothing ventured...
Posted by Peter at 12:31 pm No comments:

THIS is what I am talking about

Checking back on my recent posts to Newsnight, I find this more than interesting submission:

Germany has made progress on renewables, but it's not all jam. According to the article, gearboxes which were supposed to last 20 years have been failing in large numbers. There have also been other failures, including rotor blades flying off.
Now whilst the financial cost and percentage of generated power is often quoted, what never is quoted is the whole reason why these things exist in the first place - CO2. If these devices are failing and having to be replaced or repaired frequently, how much extra carbon does that generate and how does it affect the amount they save - in short - are they saving the planet or just another business opportunity?
It also leads to the question, if the UK rushes into more and more renewable before the technologies are mature, are we going to find costs rising on projects just as the Germans have?
Perhaps Newsnight should do a report on the reality of the German experience.
Spiegel Online - The Dangers of Wind Power

No one is saying we don't look around, or try, all manner of worthy solutions. But get the green-tinted glasses off! All we hear is what these things 'can' do at full tilt, 24/7. But as this shows, there are all manner of other considerations (it focuses on safety, but reliability is obviously bound in) that may mean they are not quite the solutions being claimed... especially on enviROI!
Posted by Peter at 11:44 am 2 comments:

Too little, too late

Well, that's the Telegraph's take on Ol' Golden's key speech on the environment.

"the way he squared the circle was to give us rhetoric and a lot of targets pitched into the future, into someone else's term of office."

"it was extremely hard to see that what Mr Brown was proposing bore any relationship to Churchill's 'action this day'. It was more like 'action by 2020'. Targets for renewables, cars and incineration with energy recovery all tripped off his tongue - aimed at a decade or so hence."

"we have learnt to be wary of targets. We recognise obfuscation when we see it. And the only environmental slogan that will be believed is: 'Action in my term of office.' There was none yesterday."

Quite! I couldn't have put it better myself.

Oh, and I just loved the thought of Milliband and Brown looking for ideas to steal off the Tories.

The Times - seem to think it was all about sealing the fate of the plastic carrier bag.

As do those at The Indy. No, I'm being unfair, in its leading article it does take a serious look at the content of his speech. "The sad truth is that on the really big issues, Britain is taking a lead only in the production of hot air rather than in its reduction."

The Guardian - it's 'new and recycled pledges'. And "just like Blair - Brown was short on new policy."
Posted by Dave at 8:47 am No comments: