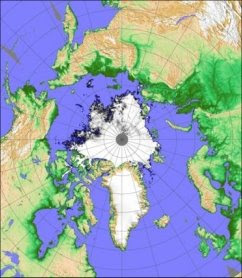 It has finally happened.

For the first time in human history, both fabled North West and North East passages are open, making the Arctic ocean capable of being circumnavigated. It is thought that this unprecedented event has never occurred during the last 125,000 years, and some scientists now believe that the Arctic ice cap is entering a death spiral from which it will never recover, leading to the Arctic being ice free during the summer months, perhaps as early as 2030.

The NSIDC reports (as of 26/8/2008) that the ice extent is the second lowest on record, and with a couple of weeks of ice melt left to come, it may well be that last year's largest ice loss record could be broken again.

The ice loss is regarded as direct evidence that our little lump of planetary rock IS warming, and whether you believe the warming is man-made (or worsened), as the IPCC consensus states, or entirely natural (as many believe to be the case), it would suggest that things are going to change for humanity rather significantly.

My question is - what if the Greenland ice cap IS following suite and also starts to disappear? Perhaps this is the time to buy shares in welly and boat manufacturing businesses?
Posted by Dave at 10:15 am No comments: