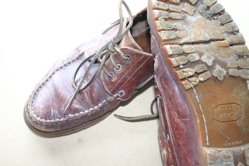 I love my deck shoes. For decades they have conferred sockless casual
style to my feet on demand. And despite several serious bouts of
maintenance, they just got more and more comfortable. But now I fear
they have reached the end of the long road we had been walking together.

I had hoped against hope that a repair would be possible, but even if
it had (and most artisans simply shook their heads and did the Dead
Parrot sketch from Monty Python) the price to restore an already
shaky superstructure was going to be prohibitive - costs started at
£45. And just a few doors down there was a gleaming new pair for £40.
Not as nice, but.... affordable. And so it is. All I know is that I
will be carefully picking them apart as that tough weathered leather
will have a use... someday.

Meanwhile in my garage the dead decade-old dryer rests ready for a
weekend disassembly job. £50 call-out plus unknown parts and labour
to put it right, when a new one at £150 plus 3 years' warranty means
it is simply not worth it. And now, especially with summer upon us,
my airing cupboard conversion is already churning out nice, if
crispy, dry towels and saving a big electricity bill in the process.
So it will not be replaced.

I hope to soon report a positive story in the form of an actual
repair that was still worth it. Watch the ideas page!

When I wrote that headline it was just a play on words based on a faintly remembered saying. It was only when I Googled it to find out the origins that I discovered - without meaning or wishing to get all theological on this - another relevant complement to the modern environmental/commercial relationship.
There is no doubt that there are out there a lot of good people, with lots of good intentions, trying to do a lot of good. A lot.
Warming to my notion that a lot of our problems are down to the fact that there are lots of us, as a consumer who has either asked for or simply gets exposed to green-group messages I have to say I'm feeling a little overwhelmed these days, 'cos there are lots! And there I'll draw the 'lots' bit to a close.
But sadly, despite the overwhelming volunteer, not-for-profit, charitable nature of all this activity and most of the practitioners, I can't help but have a small concern about the motivations behind it all; whether there is a slight shift of concern more to paying the mortgage and locking down the pension plan at Central Office Towers.
Hence I was more than interested, and impressed, by this commentary from Grist - How I Didn't Spend My Summer Vacation - a critical examination of how the youth are used by environmental organisations.
The author poses this valid question (and provides an answer I must say seems accurate, if not attrative): "But what if a listener got so riled up by the canvasser's description of climate change, deforestation, or urban sprawl that he or she wanted to get active -- lobby! demonstrate! organize! -- rather than give money? This person might be a great public speaker, a natural organizer, or a talented artist who could contribute more value to the movement with a week of volunteering than with annual membership dues. The hastily trained canvassers would probably suggest checking out a group's website and signing up for emails, but they're not really sure -- all they've been taught to do is ask for money."
It's a good article. Worth reading. I just wish there was more of a clearer solution to take away.
Posted by Peter at 7:43 am No comments: