And he'll fly anywhere he can to save the planet. Cheap. 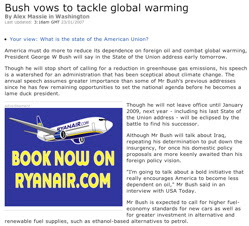 I'm sorry, it's not quite fair (though well-balanced with the last left/right-wise), as I know our adsense can throw up the odd ad on site that is not what we'd wish.

But these are booked banners.

I just love the irony.

Yet another award we have gamely gone in for.

I think one reason we do not often win is I can't resist posts like this.

Because today it's still be advertised, despite:

"The closing date for the first stage of entries is 19 January 2007. Successful entrants will be notified by the end of January"

I also love the irony of the ad next to it. I guess the snow is no longer any good in Europe, so Canada is now the place to go to ski... for those keen on saving the planet, and whocan afford to do so.
Posted by Peter at 10:09 am No comments:

Shssssh, you don't know who

This time it was about the power of supermarkets crushing small suppliers and shops.

At one point we had the usual bouffant and blonde 'interviewing' a besuited talking head from some ministry or body or whatever. So far, so pointless.

But towards the end, my ears pricked up when it transpired this guys did actually have powers to impose sanctions*. 'What are they?' asked the bouffant. 'I'd prefer not to go into that now,' said the suit, unchallenged. Er, why? Was it a secret? Seemed like the key point of the deal to me. Another media triumph. Meanwhile, back to the skateboarding duck...

*Reuters - Supermarket probe reports early findings - Or, not, possibly???!
BBC - there you go
Posted by Peter at 9:18 am No comments:

There may be a link on their site later, which I'll add, but I have to post on this morning's BBC Breakfast TV 'piece' on urban 4x4s.

Seems they are, on top of all else, less reliable than other cars (more complex drivetrain? Ceratinly another eco, if not financial-nail in their coffins), which gave the producers the chance to throw two fighting cocks in the ring.

So we have a slick (in every sense), suited petrolhead who was allowed to claim, amongst other things, that they were safer (I thought they were more prone to fall over), pitted against yet another frizzy-haired earth mother from London ('No darlings, it's not a class issue (you bet, it's a 'we have decent public transport to do our thing, and sod the rest of you'. Here WE lead, and the rest of the country will follow'). Let's just say I didn't identify too closely with either.

In the great scheme of things, her rebuttals were plain daft, where she could have scored some points. And despite being waaaay too extreme in a few areas (and being allowed to get away with them), he made a lot more sense and came across a lot better.

Though aware of it so not a new point, as he asked: why indeed is so little being done to restrict the actual causes of more pollution and emissions, such as vans and trucks, as opposed to such divisive, spiteful, ill-informed and tokenistic campaigns?

And why is the media stoking them with such mouthpieces in the pro/con debates?

Answers please, on a ratings card.
Posted by Peter at 8:59 am No comments: