Sometimes you just have to sit back and appreciate the show

This is indeed a class war, and the campaign against the Aga starts here

Actually, some pretty good points being made, but I rather suspect this may get all rather lost as some whipping up a lasagne en route to the next protest won't see it that way.

This is something worse than class war

One I think I will observe, discretely from a distance. Whilst many Fiesta-driving, tabloid-buying MoPs (Members of the Public Striving) might well know nothing about the battle raging aroun.. above them.
Posted by Peter at 5:55 pm No comments:

First Self Trumpet Blow of the New Year (sorry) 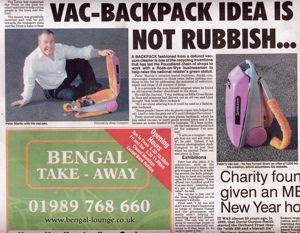 I know green blogs are a bit of a bore when they talk about themselves all the time.

But I like to think we're pretty well balanced, and when something complimentary happens it does make you proud and feel like sharing.

This was a welcome surprise, and spin-off from our little Voucher Tree initiative from late last year, which did pretty well locally.

Well, it has spun off and gone a bit further, which is nice, all thanks to my Vac:Sac catching the eye of the Hereford Journal photographer.

It was also worth noting that in chatting with the reporter when she was researching the story, the link we now have with Poundland piqued her interest mote than a little, and cropped up more than once in the piece.

I think a New Resolution might be to get back in touch and a) do something jointly to help their customers 'green up' even more with Junkk.com, and b) PR the heck out of it!
Posted by Peter at 12:18 pm No comments:

That was my reaction to this piece on CO2 absorption by the world's oceans in yesterday's Telegraph.

Evidence suggests that our warming oceans are no longer absorbing Carbon at the rates they used to, which just might point to the fact that climate change could well accelerate.
Posted by Dave at 10:46 am No comments:

Of all the activist groups, I have found Greenpeace to be the most erratic to follow and/or support consistently.

Protest is very much the bedrock of a free society, and they have dealt in this for decades, pretty much always effectively but not, IMHO, always wisely.

As a rule of thumb, I am not in favour of anything that creates risk, breaks laws, incites violence or, and especially, efforts that selectively target and inconvenience poor schmoes just trying to get on with their lives.

With this latter at least, I usually wonder how the perpetrators would feel if their chance and a holiday or somesuch was ruined by a bunch of others who are often a tad selective about what they do and what they aim to stop.

However, smart ways of raising profile that hit the pockets evenly by being more targeted at corporates and governments (it all ends up back in our wallets no matter what, let's not forget) are, when done well, to be admired.

Hence I think the purchase of a parcel of land in the way of the proposed 3rd runway, to be divided into mini-plots, to be very smart.

Not quite so sure on some of the justifications being used (the spokesperson was very inarticulate and hence less than persuasive in soliciting public support on SKY news just now), and again the choice of celebrity messengers (a few of the luvvies being against this seem quite well travelled, and indeed seem more concerned with what was going on over their West London homes than sea levels in the Maldives), but this is one worth following to see how the various protagonists handle it all (I see Mr. Brown in a dithering funk, the business community tying itself in contradictory 'good for the community' knots and the activists getting more radical and losing public sympathy pretty quickly... all per usual).

BBC - Protesters buy up Heathrow land
Posted by Peter at 8:30 am No comments:

A silent prayer from the media scrum covered the religious group paying for climate action.

Check the picture captioned 'At the end of the trip, Peter flies home...'

I can't believe it wasn't staged. Very subtle if so. Or maybe he just got on the, er, plane first or off last.