Rubbish needn't be a dirty word. But it can be. 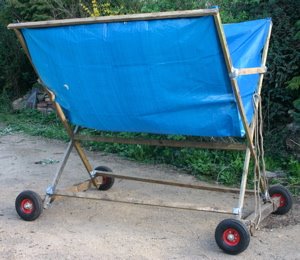 I awake to another glorious day (at least in Ross-on-Wye) here at Junkk Towers. That is doubtless bad for the water utility guys, and hence us, down the the pipeline - though I have managed to really stir it up with the council by asking what it would take to reintroduce the water wheel our property used to sport when it was a mill in the 17th century. Only this time the bread being made would be money, in the form of reduced energy, from the brook flowing alongside.
Anyway, it has been hard to resist being outside from dawn to dusk, and I have attacked the garden with enthusiasm. And it has attacked me back, as I now sport a few thousand bramble cuts.
But it has enabled to me to successfully test my latest creation, which is a device to get such high-volume, low(ish) weight material from the house to the local dump. And it worked a treat (see pix of Mk#1MP (for Manpower) trolley)! I must also commend the facility in question (I'll leave you to decide on the value of the trolley - which in addition to its (car, if not me) energy sparing features, also saved the vehicle interior fabric from being shredded), as the various skips were many, varied, and well laid out to maximise the recycled goods.
I just hope that having commited all this effort, it did all go where they said it would, which in the case of the garden waste was advised to be shredded and turned into compost.
If you watched Ch4's 'Britain's Rubbish' you may have reason to question, and simply wait 'til post 5pm for a nice little bonfire.
But these days I find myself also questioning the questioners, looking for a ratings-based agenda that may outweigh the news value. Though at a massive 4 posts on the forum attached to the site above, I don't think they'll be too excited by the response. I'll probably add this to spice it up!
This was another, near mirror copy, of the BBC expose that rocked the recycling world a few months back, and on which I blogged quite extensively at the time. I think then that what excised me most was that I doubted that much would happen subsequently, from any quarter, media or authority.
Well, one out of two ain't bad. The media have had another crack, and if anything this one was more grotesque.
Quite simply, a major Northern Irish recycler was investigated by a covert, secret-camera-toting reporter, and they were pretty much not recycling, rather just saying they were and sticking it in the landfill. Worse, they were importing stuff from over the border and doing the same, all at massive profit.
And yet again we had a few authority talking heads going 'oh gosh, we'll look into it'. My only eyebrow twitch was that, considering the programme title, this was only one incidence. Hardly 'Britain', and I don't mean to offend our fellow Brits in Northern Ireland by saying that. I just think to justify itself it could have benefitted from a bit more scope, perhaps referring to the previous Beeb effort and a few more, if they exist.
Where the programme did score was the area it dealt with more extensively, which was fly-tipping. With the reason, if not excuse, that it's getting worse due to some serious costs for legitimate disposal, this really was a fright. Really nasty guys doing nasty things to us all. And all because, it seems, they can.
This is where I think a good point was being made. There have been many regulations put in place, and mostly good ones, but it seems little in the way of trying to police them effectively. So we have the full force of the law being thrown at a guy who puts the wrong litter in the bin, and no one wants to deal with the thug who is committing vast offences to property and person.
And that, while more and more typical, is where Britain, my Britain of fair play and justice, IS now rubbish.
Posted by Peter at 9:41 am No comments: