Shouldn't do what it says on the tin

Food Flight! The Argument Over Flying Organic Food - Is one of those that in most ways is sad, but in others make you giggle when you shouldn't.

Just how the Soil Association can figure removing an organic label from something airflown defeats me purely as a matter of language. The two are different, and distinct.

But it also shows the knots the various competing nanny-movements are getting themselves into, and dragging us down with them as well.

Especially when I read this: We at TreeHugger would hope that viable alternative jet fuels or solar powered planes or those using zero-emission fuel cell technology would come into play before it comes to that.

Solar powered planes! Today I am having trouble lighting a bulb with a 1sqm array.

I'm not sure '...only one tenth of carbon emissions from food transportation-, and growing is quite the thing to dismiss.

And while I agree that wasting less food would be far more effective I just wonder how? In fact, taking our own family, some of the most vilified packaging initiatives seem to be helping: individual salad or one person portions, as examples.

The rest is fair discussion.

Indy letters - Food air-freighted from Africa
Posted by Peter at 4:33 pm No comments:

One man's issue of conscience can be another's meal

Having lived in Asia, I have seen first hand how other cultures do their thing. And cope. I have also seen how predominantly Western sensibilities can lob a big ethical spanner in a very complex works: The ‘carbon offset’ child labourers

So when I saw this headline I thought 'Oo, 'eck, here we go again'. 'Better dead so one can feel fine, than fed and spoil the luvvies' bleeding heart wine' was how some viewed the activities of a few liberal groups crashing about the jungle in days of old. It's a tricky one, but to some kids not having a job was worse than having a rotten one.

This piece seems a bit of a stretch, though. Even with my faith in low to no provenance-checked carbon buy-offs so well entrenched.

But I really can't see how 'helping persuade' families to give up labour-saving (and cost sucking) diesel pumps is so awful. I guess it depends on what is meant by 'help persuade'.

Which may be explained (though I doubt soon, here or anywhere) by the Indian experts who have criticised the scheme, saying it forces anyone to do anything. The bit about travellers I'll go with.

But then we get to the Old Ming sells his Jag to prove he's green issue, namely: “It’s not being monitored properly. It’s not reducing emissions. People are selling their diesel pumps to others who are using them.”

That does warrant a look, and frankly outweighs the several awards. And if four reports had identified major benefits, maybe they're all worth looking at in more depth.
Posted by Peter at 3:37 pm 1 comment:

I have 'do what?!' sensors. And when I read something like this they get put on alert: ‘Fertilising’ oceans with iron may combat climate change

Now I like science along with the next fellow. I also really like things that can help. But when I see something that 'may' work being written up so factually, especially when it's about a short-term mitigation 'solution' of dubious merit that impacts the rest of the planet, I do wonder why it's up there.

It's only later you get to find out that there are some down sides. Mind you, lobbing a ton of car in to get back 100,000 tons of C02 seems like a deal... if it works. Maybe we could set up a ramp at Land's End. Furthest out gets a prize. I know, a trip to the Antarctic!

Meanwhile this, which I saw in passing, seemed more of a worry: Rapeseed biofuel ‘produces more greenhouse gas than oil or petrol’ - then you read the comments. What to believe?

Tinkers those journos, eh?
Posted by Peter at 3:22 pm 2 comments:

The cause now seeking a celeb may be found at... 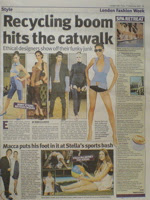 Speaking of celebs (well some in the big business world seem to be accorded that accolade), I found this an interesting 3rd party view on just what it all achieves: Look at us, doing good

Now, no one can or has arched an eyebrow more and higher than me on who bolts themselves to what with questionable consequences and even worse motivations, but to have a skewering from within ranks was novel.

I even pop in a picture I'd cut out last week while we aware in London with a view to going 'OMG, I must get some of those!'

You have to love this, from one of the best examples: “I do Third World, I’ve been doing Third World since 1994,”

So here's a website for those who want to give in a targeted, intelligent and private way, rather than those who only ever get their chequebook out with their tiara: the Big Give

It will be interesting to see how well it does (I guess by definition we won't see much about from whom), and how much support the parasite industries feel like supporting it either, beyond this piece.
Posted by Peter at 3:07 pm No comments:

Email ThisBlogThis!Share to TwitterShare to FacebookShare to Pinterest
Labels: CHARITY, THE BIG GIVE

I could not help but note that at the awards on Friday (love saying that) one of the co-winners was Citroen, in a category with a few other big names doing all sorts of eco stuff.

Thing is, I don't think they do much involving anything other than small cars going a long way on existing fuels. Interesting.

Anyways, last week Jeremy Clarkson was waxing lyrical about hydrogen. This week there are some replies. I was surprised, but as one come from a Professor of Engineering, it is worth keeping one's mind open. Especially this:

It takes slightly more energy to produce hydrogen by splitting water (the only means we have of obtaining it), than is produced when the hydrogen is recombined by burning it in an engine.

I wonder if we'll hear more on this. Doubt we'll see Stuart Rose going to Plan C5 too soon, though.

As it is provoking a worthy and fascinating discussion, here's a new one for fun:

'Depending on how it is produced, hydrogen fuel is a clean, green source of power that can be easily stored.

The bus is powered by a cell which uses hydrogen as it fuel, cutting out the need for non-environmentally friendly fuels, the university said.'

This is all valuable research, to be sure, but the fudge on its current eco-friendliness is a thorn in my view that mars the narrative.
Posted by Peter at 2:59 pm 5 comments:

As I think Transport for London were a co-sponsor of the Awards, Friday was not the night to have a go at them or anything, but I was not best impressed to find that, having arrived (yes, we went by car - try getting back to Ross at night any other way) at 5.30pm and inadvertently passing into the C-zone (and the actual signage being VERY unclear to those not from London who may not be aware of the 'rules'), by obviously having to wait 'ti the next day to pay our fee (the House of Lords not being a major retailer of such things) we'd been stung another £2 (on top of £8) for the privilege. Why? There is no reason I can see other than sheer, naked, greed.

Also, as we are on the not so small matter of legislation and the public it serves, on the news I heard that 'forgetting' who was driving if snapped by a robot is now going to be made an offence. My wife and I swapped several times en route home to stay fresh. We have no clue who was in which seat when. yet we are guilty until we can prove... er, no... we are just guilty. This is madness.

And how many pols in our 'Houses of' are prone to having no recollection of events by way of getting out of them. That is sheer hypocrisy.
Posted by Peter at 1:05 pm No comments:

Putting words in Gordon's mouth - what he does with them is another matter.

Labour 07: A range of opinion-formers and campaigners says what they'd like to see the prime minister address in his conference speech. And you?

As you've had a wee while to figure some stuff out, and do at last seem moved to tackle them, I'd be keen to hear what's the plan with what some (including your predecessor) seem (well, TB has gone off on other fun and games, I guess) to think is a pretty major issue, namely climate change?

Thing is, this neat little collection of 'opinion-formers' (Really? By whose measure?) and campaigners (I guess it depends on who gets asked) above seems to have avoided even mentioning it, as have all bar one (so far) posters.

Is it therefore as a irrelevant in the great scheme of things as this deafening silence would seem to indicate, or simply not too convenient to think about (much less address right now, well, until later) in the scramble for power?

The current lack of motivation on the part of the general public becomes ever more easy to explain in light of such woeful fudging.

My understanding is that doing nothing was/is/won't be an option, and while it may seem a nifty way to hit the high points in the polls by having no stance on anything, at least for now, I'd really appreciate some leadership. Playing coy with 'your' next election is a game to play; playing fast and loose with my kids' futures isn't.

I really am intrigued as to how what some are saying is the greatest threat 'we' face isn't an agenda item. Who knows what I don't?

BBC - World leaders at climate summit - And they would be...?

BBC - Brown refuses to end poll fever -And who has this sickness? Not I!
BBC - Decision not taken? - Ahhhhh, so.

Guardian - Brown urges US to accept carbon limits - Ahhhh, an 'urge'. That'll do it. Meanwhile, if we can get back home a mo'...

If that letter is his most significant statement to date on the matter, one can only imagine what would happened if he was too focused elsewhere to be much bothered.

I am grateful to Adam of CNET (more on them soon) for the link.
Posted by Peter at 11:12 am No comments:

The equations of living

Some of these new equations of living are very funny, some quite quirky. Check them out on the mini slide show on the ClimateChangeAction blog. I particularly like the one for Greenwash.

Greenwash = Words divided by Deeds
Posted by Dave at 10:33 am 1 comment:

The UK government has granted planning permission for what is being billed as the world's first large scale wave farm. As reported by EDIE, the wave farm, 15 miles off the coast, should generate some 20MegaWatts, thereby providing up to 3% of Cornwall's domestic electricity needs once operational in 2009.

If this works well, perhaps, in another couple of decades or so, we'll see these all around the UK's coast, probably alongside a forest of offshore wind farms.
Posted by Dave at 9:35 am 1 comment: