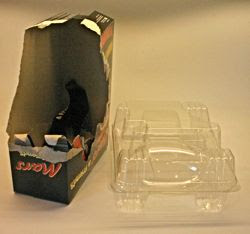 Somewhere out there is a happy medium. And I don't mean a carny tarot reader who has hit the cooking sherry.

In the sweet (as in, 'Ah , bless') corner, see that Easter Egg packaging? That is just one of the two bought by my sons for each other this day. It's just one, because both would not fit on my mini infinity cove.

The eggs would have, of course. That is, if they had lasted the milliseconds it took the boys to wolf 'em down. But the packaging... all of it... lingers on. At least until I can get to the recycling skips next week. Cardboard in the one and, now, I wonder if the plastic goes in the 'acceptable' bin?

Thing is, I don't want to be a grinch. So I do see some reason, if not great merit, in certain packaging, if purely in terms of presentation and design. Which is why I ended up in a disagreement with Norman Baker MP, actually a usually fine and worthy example of the Westminster crew, over his wielding of the word 'necessary', as in 'un' or 'not'.

But there's the thing. At what point do we drift from 'necessary' to 'a bit over the top but it's a special occasion' to 'do what... that's just plain daft!'.

The answer has to be in there. As I look at what the boys paid for I'd say I can at least peg one end of the scale. As to the other, well, there is some need for protection when you're talking 2mm of brittle chocolate surrounding 1/2 a litre of fresh air, and I'm not sure a wafer of foil will cut it in the rucksack cycling home from school. And there is the whole 'ta-da!' wrapping thing for Granny. A paper bag of chocolate-covered raisins doesn't have quite the same 'You're special' pizazz.

Already I can see and hear the media girding their loins for the next 'we're outraged' ban-wagon, which will doubtless involve being sent a free eco-egg by courier for just £4.95 to cover p&p (and find ourselves on the subscription DM list), and that means some pol will perk up and decide this needs their attention rather than something serious others might be addressing and hence won't get 'em noticed - plus press releases all round from their offices - as the whole energy/emissions thing will be solved by focusing on the next 0.0001% actual enviROI-significant thing.

Personally I'd prefer market forces to work it out. I sat the boys down and laid out the pocket money they'd blown on these efforts. Then I put the amount of chocolate they'd got (in CDM bar form) in the egg for the money, followed by the amount they'd have got in CDM-bar form in a CDM bar.

Plus I not so subtly highlighted the pile of cr*p the former had come in by way of debris.

Thing is, despite all the enviro-classes in the school curriculum and every BBC Breakfast News propaganda-fest they've been exposed to since birth, plus what Dad sort of does for a living, they still rather liked the fun of the egg. So maybe another crushing legislative imposition is the way to go. Not sure that this will get 'em onside, though.

But by way of compromise we are going to try and find a second use for the packaging now.

I'll let you know if we do, but can't say I'm that optimistic in this case.

Happy hols by the way.
Posted by Peter at 4:27 pm No comments:

A matter of principle

If only Gordon Brown could drive

It's a shame that the subsequent thread posts show the polarisation such blog posts inspire, and which often render these things such a trial.

I have to say I have much sympathy with the basic thrust of this piece, though not specifically or restricted to driving, and its costs per se.

It just the worrying trend of quite significant decisions or, more often, impositions, being made on many by a few almost totally isolated from the actual realities and/or consequences of them.

Extending the automotive motif, beyond chauffeured ministers and taxi-fare redeemed Mayors, there is also the simple fact of the London-centricity of it all.

Simply put, you really don't need to use your car as much there, and certainly not to get to work. Ignoring the situation elsewhere, by politician, activist and even media, is positively divisive. The latest 'green' measures have done nothing to support more economical motoring options, or encourage any decent enviROI moves, and merely added a swingeing additional tax burden to those struggling to cope already with all the other costs imposed to pay for index-linked salaries and pensions.
Posted by Peter at 8:26 am No comments: