The things we do to get noticed 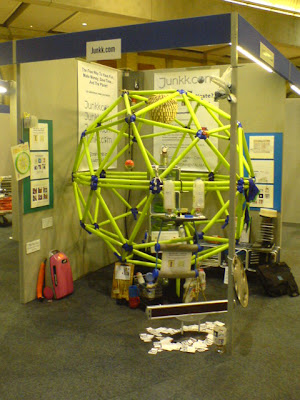 The drive in to Ally Pally was smooth enough, thanks to the Sat Nav.

Yet another Junkk stand high on reuse but low on ease of use.

I'll post a picture if I can get this lappy to find the drivers for my ancient mobile/camera.

Still, it could have been worse; come media time half the stands were still bare. Seems the visa guys had not smiled on most of the overseas exhibitors.

So you might imagine that would have given me a clear shot at the London media.

Not a bit of it. These guys do not arrive and find out. They arrive at expect to be guided.

The number of times a promising opportunity got missed as a brisk, brusque lady in a black suit arrived with a clipboard and told the journos where to go next.

But I did my best. A BBC guy (I think) called Graham Satchel gave me a few minutes, but didn't 'get it'.

A reporter from The Sun took some samples and promised to come back with his photographer, but didn't. I really wanted a slot in a tabloid.

Next lesson of PR: don't let them escape!

My best shot is with GMTV. The upside is a possible understudy slot during tomorrow's Breakfast Show. The downside is being there at 5am... 'in case'. That has meant finding a local B&B (£65!) and a 4am alarm call.

Ah, well, it's certainly not 9 to 5 in the conventional sense I guess!
Posted by Peter at 9:17 pm

I thought your stand was the 2nd best just behind the Musical Man from Mars.
I thought the exhibition was a bit of a damp squid and reflected badly on the UK not backing UK inventors.
I only really came to see the Alexandra palace building as its connection to the Great Exhibition 1851 which could be see as the 1st British Invention show.

Thank you for your silver compliment!

I was asked by a few why it was called the British Invention Show when there were so many International representatives. I can't answer that; one for the organisers. Not as important in many ways as just having lots of interesting and well-displayed inventions, but that is 'what it says on the tin' and can impact how visitors perceive it and/or what they expect.

There is a slight danger that, in generating exhibitors, some basics do get forgotten. Hence an 'industry' gets created that rather depends too much on others in similar situations, and very internalised, so the awards and media become too important over the paying public who come through the door.

But the venue is indeed a stunning one. Though, despite good parking and bus links, perhaps a tad inaccessible.

Maybe if you express your views to the organisers, they may bear such considerations in mind.