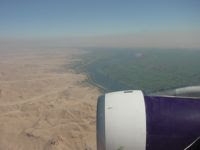 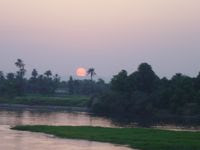 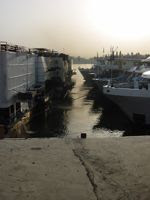 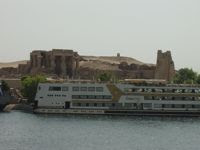 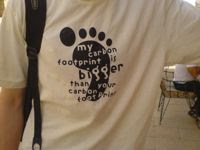 Full disclosure: we flew for 6hrs, budget class, to Egypt, for a Nile cruise.

And enjoyed every minute of it. No regrets (the T-shirt is not mine, but raised a wry-smile come 'so, what do you do' at evening cocktails intro-time)

However, learning from many who ponder and post in the world of environess, I will attempt to justify a smidge of what we got up to by writing about it, especially a few eco-aspects of it all... good... but mainly not as good as one may have hoped.

OK, we were in a sunny place. Make that sunny to the tune of 45 degrees some days, pretty much dawn to dusk. That... is a lot of energy falling on every sqm of a vast expanse, day-in, day-out. Trust me. As the only family not out the first day for a tanning session, we observed the results on the others.

Yet... I could see no great evidence of any solar collection, domestic, commercial or national, either photovoltaics or even hot water. Bizarre.

What I did note was the gentle chug of diesels, 24/7, which sadly results in a pervasive fug hanging over the Nile and its banks. Makes for nice sunsets, but not much else.

And I can't understand the need. Where the grid doesn't run, like a boat, so many thing surely could be solar powered to avoid using up GHG-emitting fuel in this way? If it's possible in the UK (see link below, but caution on the numbers, and deal!) with our weather...

Now, a lot of this may be down to cheap 'leccy thanks to the Aswan dam. A rather uninspiring structure, TBH, but quite a feat. Actually, I was a bit more impressed with the one the British built several decades before. It also had the benefits of a lock system to allow navigation, something the Russians 'forgot' to add. Apparently. I suspect this may have led to, and still inspires some... frustration, downstream.

Which brings me to the other eco-aspect from this trip: the importance of water. Look at that shot out the plane window: no water, no nothing. More than that, no irrigation; no growth more than a few yards in. The country is a high % of sun-blasted sand and little else.

Man has a great capacity to harness nature for good, but also a great responsibility to ensure it is done properly.

Sadly, as I write this I add below a URL that poses some of the dilemmas facing our own mega-water-harnessing scheme.

Finally, I leave pondering a matter of historical interest, namely was the climate back in Ramases' time as oppressive as now?