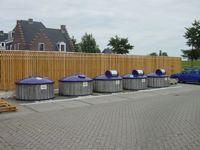 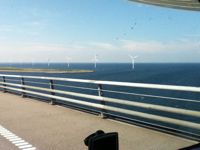 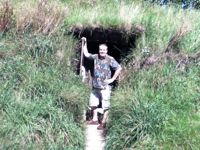 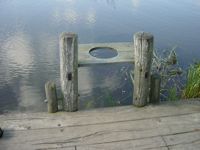 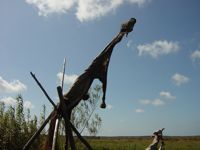 But, in reality, it was just our summer hols.

Like the EuroTunnel/Star. Greenest crossing. Not by design, but try getting an RV in an EasyJet.

Actually, can't fault it, for speed or price or simplicity. The threatened strike was less thrilling, but we dodged that.

Our route took us from Calais to visit friends in Denmark and then back via a festival gig for the missus in Holland.

Just a few pix and notes of relevance.

Big 'uns. Look at that blade on the flatbed in the picture.

And, for the most part, they were turning. Because the wind was blowing.

It was blowing a lot.

I know this as i was driving a high-sided RV weighing not much over a honking great bridge when it pushed on the side like sail... scaaaarrrreee.

Other than this, the recycling was noticeable by its integrated design (those bins above went down into the ground 2-3m, which means a big old bin liner) and relative unobtrusiveness. Though we saw almost no domestic wheelies, and the camp sites were woeful. Frankly camping in any form is not eco, sorry. You generate a lot of mess and are not in the mood to expend much resolving green issues.

Finally there were the museums.

There was one on the German/Dutch border that was great, covering marine history. The boys really liked the toys made by sailors, all of which moved or played, etc.

And then there was the Vikings. We went to a great village recreation.

Hey, those guys had green roofing a long time ago.

And their recycled door security systems were...effective. Nothing says 'who goes there?' liked a skinned hoofed quadruped.

Finally, there was the loo arrangements...

I'll leave you with that image. It won't leave me for a while.
Posted by Peter at 3:32 pm