There Will Be Blood - Or... 'RE-evolution, read in tooth and claw' 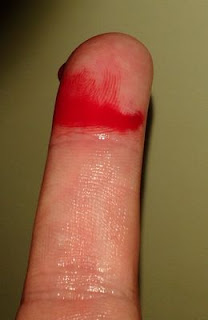 (Note: In the spirit of reuse, no fingers were harmed to make this post, at least recently -
we just used a shot from a while ago)

There Will Be Blood.

Likely a lot of sweat, too.

Most certainly a few tears.

For sure fingers getting raw as keyboards are pounded.

Because big changes are afoot with Junkk.com.

Many, most... hopefully for the better, but there are going to be some compromises.

It will not have escaped the notice of many that, whilst once buzzing, the site has languished a bit, along with this blog.

Sadly the hoped-for revenue streams to hire the staff to run it have not materialised, and while much is on 'autopilot', a lot still needs human TLC. This always costs, in time and hence money. Just keeping it open has annual fees that were proving hard to sustain in its original configuration.

We have also reviewed the site to see what has worked, what has not; what has been used... and what has not. And then looked at what exists now that did not when it was created. So much now free that cost and arm and leg back in the day. Plus a quaint glitchiness that could often task the most patient IT guru to track down.

So we are 'evolving' it, and moving the site to a WordPress platform that is going to be a lot cheaper, easier to use (for admin and visitor) and, we hope, bring Junkk.com back up to date.

However, there will be sacrifices, sadly.

A lot is going to go. Frankly much was outdated and/or simply unused by even us, much less anyone else.

Already the trusty home page is gone... though that was by accident! In moving server it vanished and we can't seem to get it back. No more updated links to latest ideas or blogs, and banner advisories (though with luck the new design will permit such things to return).

So, taking the current sections, what's likely in & out?

Every site needs and has one. So there will be something like this, if updated.

Probably no longer needed. The legal protections are covered by sensible disclaimers common to any free info site, and we are parking facilities that needed anyone to register.

There was also a cost to registering under the DPA with the ICO. We'll probably remove the database to save on the cost this incurred. Betting a large chunk are hotmails long since changed and now ineffective to access the site or the site to access the users.

To be fair, there were a bunch more, but they did dry up a long while ago.

We were (still do; there will likely be one last hurrah to advise of all these changes nearer the handover day) using a very ethical mailing system, that even on 'mates' rates' as they liked our style was 1p a pop. When you are in tens of thousands of mailings that adds up.

Again, it's possible that WordPress and maybe Mailchimp might one day allow something to be re-instituted.

We really let this go once Chief of Stuff Emma departed. Is a forum necessary when we have this blog? We'll see. They are not quite the same, and WordPress may make running one easier than it was before for those left (well, Junkk Male and First Lady PJ).

Also WordPress is up to date on integrating with all the social media tools we can with luck engage with on site and interactively: twitter, FaceBook, Pinterest, etc.

JunkkYard will likely bit the dust. Pity. It was an idea ahead of its time and did a bunch of things even Freecycle didn't when it started. Still a few nice aspects compared to many exchange sites still.

One deciding factor will be if the registration goes too. That was needed to locate the swapper and swappee.

Definitely going. Oh, there'll be some means of getting in touch, but given the spammers of Eastern Europe and the Far East were all who got in touch to sell their handbags and Viagra... we'll pass.

With luck WordPress has a nice, free 'Captcha' verification script to ensure we only deal with humans in future.

Never say never, but likely toast. Even when businesses had it for free, and were handed their own admin. privileges, they never updated their own pages.

In fact the only use seemed to be people getting in touch to say links are dead, etc.

Here's hoping. Chief of Stuff Emma put a lot of work into these, they are useful, can be updated and it's a pity to lose it all. We've found it all ports easily enough over to here on Blogger, so Wordpress should work too. There was a concern on images, but with luck these can be stored on the new site and work still. Definitely a 'spare moment' task as we create and populate the new site pages over the coming months.

Hey... one day. Never opened for business 'til now!

And then, last but most certainly most...

The BIG one, in all sorts of ways.

These are what made, makes and will make Junkk.com special.

But clearly WordPress can't handle what we envisaged and created decades ago, and still serving as we speak.

Hence a lot of the functionality will sadly need to be parked if not lost. Such as the data sections. No great loss, as apart from JunkkMale it looks like few used it anyway.

We're looking at how best to port over the best ideas in ways so they can still be searched and shared, and of course such that new ones can be imported.

Mostly this will be another cut 'n paste job from the old site to the new, and more bleeding fingers.

Of course, if anyone has any thoughts or suggestions (preferably not involving more time or money) to help, we're happy to hear them!
Posted by Peter at 3:08 pm

Hello - I don't know if you're aware of this, but I suspect your site may have been infected with some software/virus nasty. Every time I visit your blog my antivirus flashes up a red alert and tells me it's blocked a malware threat called 'bookofrubbishideas'. Might be worth investigating. All best. Tim.

Tim- tx. Will need to ask an IT guru on this, if one can be located.

If it's the Junkk.com blog, that is out of my hands as it's run by Blogger, and thus Google I think.

If the link from the Junkk.com site to the blog another matter.

That said 'Book of rubbish ideas' is (a legitimate) one I have reviewed in the past and does mention Junkk.com as a resource.

Seems an odd one to trigger malware.

Just tried. The blog link is now 'hidden' from the site home page as we are in process of moving platform.

It is on inner pages. Nothing on Safari as I am a Mac user.

Will ask some PC chums to check on Firefox, Chrome, etc.

Have had feedback from other PC users. No issues. The prevailing notion is a rather aggressive spam filter picking up a link it doesn't like.

Tx for the concern anyway.