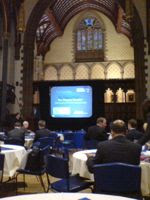 I just got back last night from a two-day trip to an intellectual property conference in Glasgow.

And it was one to which I had been invited to as a speaker. The roller-coaster ride that is RE:tie was and still is deemed to be an interesting study. And this time it was in the awesome, but imposing setting of the University's stunning Bute Hall.

Mostly pretty high-end legal stuff which was waaaay over my head, but some useful material which I'll share here for budding researchers and/or inventors. One of my points was that those who 'create' are often not that well served by the highly necessary complementary business aspects to get to sustainable models, and that is often down to not knowing about a lot that is in fact out there for free.

For instance, a speaker from the IPO shared these latest, and highly useful IP tools on their site:

Meanwhile another speaker, from the British Library, shared this:

Plus the fact that they really do have an awful lot of information available that one might not realise is there to be had. For instance, I have been staring at a price of £1200 for a report on the packaging market for bottle caps, and wishing I could have a look. Seems that, via the Library, I may be able to just that! For nothing.

And then, in the course of some spirited discussion between podium and floor, I ended up with some key offers of direct help which I am hoping will prove highly valuable.

One little bit of Kismet was that the very day I spoke the news media were alive with top stories about packaging, and manufacturers and retailers were not coming out well and/or struggling to find and share solutions, and certainly few that would be deemed positive in a consumer sense.

As I was there I missed them, but have had a quick trawl to try and capture a few. They did not hurt my advocacy for Junkk.com or the cause of RE:tie, a redesign that turns grams of plastic from litter or landfill... to reuse.

Telegraph - 'Excessive' supermarket packaging is leading to higher council tax bills
Examples included Britvic saving 1,670 tons of plastic a year by redesigning Robinsons squash bottles
Telegraph - M&S bottom of packaging recycling list - Time for Plan, er... reuse?
Telegraph - There is a Plan B - with a link to a comment I made a while ago! One of ... two so far, even with the revisit.
Telegraph - Packaging 'sinks Marks & Spencer green bid' - Not a headline I fancy they will appreciate. To be fair, and the MSM seem hardly capable of this when a good headline beckons, the last para does suggest 'M&S disputed the research, which looked at 29 of their 5,500 products, and said 91 per cent of their food packaging could be recycled.' Might have been worth a follow-up to check? Or... moving on.
Telegraph - M&S worst supermarket in green report - Archive stuff, but when you end up bottom I guess that is what gets focused upon. Especially if you make some big claims that seem poorly borne out in fact.

Times - Supermarkets fail to shine in packaging study to find the greenest of them all - Interesting that they single out Waitrose instead. It is worth noting the first comment that councils, or rather the national policies, are by no means helping.

An industry response that is, as might be expected.. 'robust'. But before we go all Mandy Rice Davis WeTWoST (Well, They Would Say That), read some of the responses. Not sure any MSM types did, especially on broadcast. Lots of emotive, and illogical, vox pops supported by often rather conveniently forgetful 'experts' with axes to grind and targets to meet. It IS all vastly more complex and serving the public ill to pretend otherwise.

'..a constructive debate about packaging in the media.'

Bless. When there are agendas to push, ratings to drive and targets to meet, I have long since given up on anything well researched and/or objective from the MSM, complicit at the hands of those who are happy to use their less than challenging reporting abilities to push press releases out as stories.

And I am a green campaigner!

My frustration lies in that all too often the cause of actual overall reductions (waste, emissions, etc... that I categorise under enviROI) is poorly served. Also there can be a highly negative, and damaging backlash if these 'messengers' have their messages shown to be poorly thought through or, worse, often more in the cause of their own self-interest.

Fool the public once, shame on you...

The ever worthwhile Almost Mrs. Average has a balanced, consumer-centric take... Recycling Blame

You're right, the public is not daft, yet we are the ones who are being left out of the loop when it comes to striving for solutions.

Good luck with your RE:tie. I've got a feeling you're going to get even busier. :-D

Here's hoping. I just hope 'busy' also translates into a few other helpful things to the cause!

But there are some glimmers out there, and it's nice when smart folk who can make a difference (like you) 'get' what can be done if one thinks a bit more beyond the next quarter's profit or target.

Keep up the good work on your blog; it looks like it's really buzzin!

I wrote an ad headline once for watches that went back to 'wind up' instead of batteries: 'Power of the people'.

I think it's time the public starts getting itself much more involved in the process, or we risk being 'guided' in directions that may not best represent our wishes or best interests.

LOL, I love the use of the word 'guided', so appropriate in its context. I think it's time to bring back your ad headline..."power of the people", that too seems to have it's relevance to current times. :-D