COMPETITION - 'Here's One I RE:made Earlier' 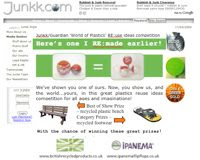 Crossing everything, after almost a month of the 'wrong kind of snow' (ie: several feet deep either here or there, or on both) we hope at long last to soon be seeing the bench arrive in Ross On Wye.

As the last of the snow melts away, this Friday (30th Jan, 2010), there will be a lunchtime photocall for the press as BRP hands over the donated prize bench to local dignitaries/council representative.

And then, as can so always be the way, it gets a little less better.

STOP PRESS is apt, as that is what I had to do in a mad-panic yesterday morning. Sadly our co-hero (the bench) was stuck in a snowdrift in Yorkshire, so we had to call off the photocall. And that was a lot of phoning around, as many folk were due to attend from far and wide as the story was one the media seemed to like the sound of.

Won't say it was not a big disappointment.

However, the good news is that all (bar one... apparently the big producer in Brum didn't think it a 'hot' enough story so they were not coming anyway, so muhr) I contacted were really great about it, very understanding and, best of all, keen to be invited back next year for what is still a great, heart warming story.

It just gets better.

The council(s) (there are actually some details to iron out between town and county) are more than happy to accept the kind donation by these inspirational youngsters.

Better yet, the sponsors are so inspired that they are going to bring the bench down for a handover photocall in the town centre this Monday.... weather cooperating. They were going to come today but are snowed in! But they are confident they can get here in good time if they leave at crack of dawn for lunchtime.

The mayor, judges and other representatives (of council, kids, etc) will be there to receive it, and with luck it will be covered by local and possibly even regional media.

It is, after all, a very festive feelgood story of giving for this time of year.

It has certainly made my Christmas.

Well, the weekend has at last seen the final winner presented.

However, there was a development.

I was contacted by the person who submitted the winning entry.

Some students from a local (to Ross-on-Wye, who found out about the competition via all the PR I engaged in subsequently to drive awareness - even as an international media Junkk.com has a very high sign-up locally due to my efforts) school have got in touch to say it was actually a joint effort.

I had a few exchanges, and we've agreed that as the prize cannot be split, and in any case it's not really something they could use or want to have, they are happy to donate it to a good cause.

As it's all a bit unusual they want to remain anonymous but would like it to be a gift from the kids to the community to show they do care about the future and are not all hanging about at street corners doing nothing (actually not quite what they said, but I think this sums it up best).

The organisers and sponsors are all cool on the notion.

I have now contacted the town council to see if this is possible, and the signs are positive and wheels are in motion.

I think it is the best solution and reflects well all round, being a lovely way to round up the competition, and the year, at this festive time of giving.

As to the runner-up prizes, the organisers have now been provided with the addresses of these winners, and will be arranging delivery with the sponsors asap.

Wow, is the internet quick or what?

We have already been contacted by all our runner up winners. Lovely ladies, too.

No word yet from our grand prize winner. Hope they are 'on line' over the next few days to learn the good news. One 'quirk' of our system is that it is difficult, if not impossible to actually trace folk, even from our admin system. All we have is usernames and they are kept in a separate log to actual names and emails. And if someone changes their e-mail... that's it:(

It took a while, but at long last the judges were convened recently to review the entries.

At least that gave me an opportunity to make some of the entries up to help 'visualise', especially for those where no pictures were provided.

I had to excuse myself as a judge, and was not present during the judging.

There were two who kindly offered their services.

Dennis Humble of EnviroAbility, both man and organisation highly awarded in the country in the field of just about re:verything

Neil Carroll is a renowned creative force locally, nationally and indeed internationally, having been chosen as the main visual artist to represent Wales at The Festival Interceltique

They were asked to consider the entries as follows:

Marks out of 10 for creativity (is this an inspired reuse of plastic?)

Fortunately, there were no 'ties'. As no kids' entries were submitted we added another adult to the list.

Runners up (in no order) were:

And the grand prize winner was:

The judges were impressed with the standard of entries, especially appreciating how difficult it is to 'see' what can be done with 'junk' that most people see only as good for the bin... and landfill.

All were simple, but still effective. And, in a one case, very stylish.

The grand prize winner was chosen for its high marks across all the criteria. Said the judges: 'This is an idea we can see many people take advantage of, and benefiting from, especially where space is tight, for instance in flats, caravans or boats'.

Junkk.com will be contacting the winners directly to get addresses to send the prizes to, but also via here and the newsletter, as all we have is usernames and a data protected internal messaging system!

Hope no one has changed their emails in the interim.

Had to arrive eventually. And it is time to reward the patience, and ideas of those who did enter.

Due to a confluence of circumstances, ranging from Junkk.com shutting down for summer break for a few weeks, to the fact that the UK has evidently been on holiday since June anyway, I am extending the deadline one last time to include September. Back to work, back to school, back in the shed. Plus a final month to really plug it all over the shop. There have been some goodies, but I know there are more! Get thinking... and applying.

In addition, whilst staying on as organiser/Chairman of the judging committee, I am standing down as a judge. This is because, thanks to some promotions in our local media and via the Junkk.com newsletter, I may be familiar with the User Names some of the possible entrants inspired to take part, from such as the Forum, etc.

Due to ever popular demand (and the fact that, while there are a couple of nifty ideas in now, we really are still hoping to inspire a few more to justify those great prizes, especially as some great ones are still coming in. Plus, having promoted it, some media are only now mentioning it), with the agreement of the organisers and sponsors, the competition entry deadline has now been extended again to the end of Aug. This will also allow uploaders to use the new, easier upload features we have now active.

Superceding the PDF (which I'll leave here as an option for those so formatically disposed), I am happy to post here the URL to the online insert page turner. I am actually getting quite impressed with these. I am sure there are server farm 'leccy/heat consequences, but I presume there to be eco advantages too.

After a brief flurry sign-ups now quieter. May need to make it clearer that you don't need to submit an idea to sign up to the site and roam [Ed - Done - hope it's not too late!]

Here's a URL to the insert PDF. Link to online page-turner coming. Check out the smoothie on p12!

And today is the day.

Here's what it is all about.

Here's how we launched it with the latest newsletter.

BBC News doing a piece on social networking. By using it I don't have a good sense of my identity. Apparently:(

That's a pity, as I'm off now to add updates to FaceBook, twitter, etc. Which will add a lot more value I'd have thought.

Off soon to the newsagents to buy my first copy of the paper with the insert in.

[In a deep voice] 'Previously, on Junkk.com'
(pondering reversing updates newest at the top this way in future):

Sorry this is blank for now.

Next week all will be revealed.

Email ThisBlogThis!Share to TwitterShare to FacebookShare to Pinterest
Labels: 'Here's One I RE:made Earlier', Junkk - COMPETITION

Sorry about that... but a nice confirmation of what is probably the first instance of a teaser of mine actually working:)

Still sort of embargoed, and already getting nerve-wracking as the Bank Holiday means a few folk involved are not going to being checking things the day before as we'd hoped, but pop back Tuesday.

And if you happen to be going past the newsagents and see a copy of the Guardian.... well... as a designer interested in reuse then it may be worth.....[moderated out]