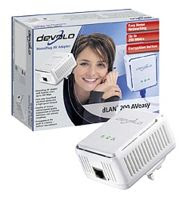 I am not typing, and will also not upload this online from my usual desktop.

I am doing so from my laptop, downstairs in the conservatory, enjoying the morning sun.

In a fast-moving IT-world of consumer innovation, there are many who enjoy such opportunity, courtesy of a domestic WiFi system.

Indeed, we have one, brought in mainly to help with a video monitoring system for my dear old Mum next door, but certainly offering a welcome connection for the lappy too.

However, like the hapless chap on the BT commercial, it can be temperamental. And, despite assurances on security from all sorts of folk who know, there is that sneaking concern about who might be picking up that signal for nefarious reasons.

So it was not untimely that I was contacted and offered an alternative - the devolo 200 AVeasy - to try, that may not mean I can surf in the garden, but certainly opens up the rest of the house and office without such concerns.

And also does so in any easy to install and use manner. Trust me. As the family LCD (lowest common denominator) screener, I am noted for being poor at getting things IT up and running.

This was plug, plug and play. Especially reassuring was that it works with Mac OSX too.

Now, other than not having to go to the trouble and expense of running a ton of cables (it cunningly uses... reuses... the house mains) to get a high-security intranet, what eco-benefits might this confer? Well, I am happy to share that the system also claims a patented power-saving mode, which automatically reduces standby power consumption by up to 30%.

I should point out that this is not the only one on the market and cannot testify to relative value and features (weigh speeds, distances and such as encryption when comparing) , but as I was kindly sent this one for review it is the one that gets used, tested and, in this case, a glowing report.
Posted by Peter at 8:10 am