Light not so fantastic? - but then there's 'Bulb Barter' 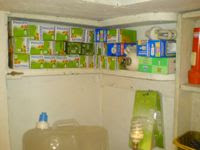 Caption: The JunkkMale household 'stash' - mostly for bayonet fittings, which we have few of.

A lightbulb went off in my head when I read this:

Low energy lightbulbs mailed to British families that cannot use them

Initially of course, I was simply appalled at how something so potentially worthy could be so mismanaged and/or abused, but then I read this: '..they have often had screw fittings that cannot be used in the bayonet sockets found in most British homes.'

It doesn't get around the 'ugly' issue (not major in this household as the bulbs are usually within a shade), but it occurs to me that it might be worth trying to set up localised (and who better than Junkk.com, with its postcode localisation system to enable people nearby to connect) system I'd tentatively call the 'Bulb Barter'.

Simply put, a place where you drop buy to exchange a bulb you can't use for one you can.

And I think I know juts the folks here in Ross to help me kick it off.

Watch this space. If it works, maybe a better, more proactive national programme than the latest Planet Ban-it?
Posted by Peter at 9:05 am