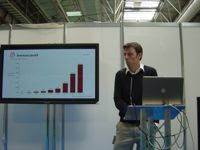 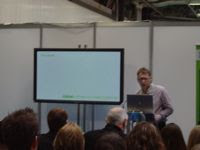 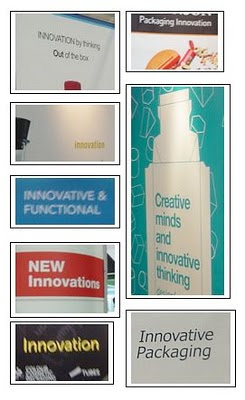 Caption: as always, Dilbert nails it.

After tackling the M50/M5/M42, the £8 parking fee and the vast registration queue (even though I had pre-registered) I was not feeling this was working out initially.

It didn't improve much as I walked row upon endless row (it was a pretty big show, so someone was/is doing something right) of stands with shelves bedecked with bottles, cans and caps.

The few times something did catch my eye, the briefly animated suits who awakened from their slumbers soon lost interest when it transpired that I was not likely to place an order then and there.

And it was also depressing that, with a theme of 'innovation', the only evidence of this was that pretty much everyone had written the word on their stands in one way or other, as if saying was as good as doing.

Because I really didn't see much that I would have deemed innovative. At all. Much less is the areas of green.

So I started to wonder just what the heck I was doing there. But, like a miner 49'er panning for that elusive nugget in an exhausted claim, the fates were with me.

The bewildering array of stands had pretty much done for me after just one circuit. I had seen nothing much of interest, and even if I had these guys were not the ones I needed to talk to. Especially the few brands of relevance exhibiting.

The nuggets were those walking about, and nearly anonymously. And it transpired that these guys were lured by fellow brand owners speaking.

Having done it all before myself my Dilbert PowerPoint cartoon is a bit unfair, as you need to get a ton of stuff across and in short order. My personal preference is that the slides are but a memory aide to talk around, but then this has failings when it comes to getting the presentations subsequently.

Lets just say some were good, some were useful, some were fun... and a few, usually from quangocrats, were dire. Frankly I wished I could have cloned myself, as you had to attend to be scanned, and hence be eligible for the follow-up briefing notes. That way I could have followed up on the details later, and concentrated on following up with the person... in person.

Which, swallowing decades of shyness, I took it upon myself to do. Often aided by sticking myself at the front and asking questions. One of my big themes, which I raised as an icebreaker to my mission, was why green was so often seen as a commitment that almost inevitably involved a cost, whereas it could so easily turn a profit if handled well (M&S has today announced its Plan A efforts 'made' £50M, though I could see few... yet... that were really end-benefit driven on behalf of the consumer). But this notion seemed to be appreciated. Engaged with, even.

For once I was not sent away with a flea in my ear. See that slide with the 'No' bubbles outside but the person only hearing 'Yes'? That was the core of the Innocent Head of Packaging talk. Which is what I used, mercilessly, in getting some quality time with him. With luck, after years of trying, a possible opportunity to present and persuade.

Equally Heads of Packaging for ASDA, and even Morrisons (after all my fun and games with them), having bumped into just the right chap and asked just the right question (didn't hurt that he was very pleasant, open and approachable) to make a quick pitch and get that invaluable card and invitation to get in touch.

There may be better ways of getting into the field of view of such folk, and in many ways I wish there were that didn't involve all the palaver of a show, but for now I am damned if I can think of any.

So... tomorrow, this time more for Junkk.com than RE:tie, I am off to London for Ecobuild at Earl's Court, trusty Vac:Sac glaring in pink in contrast to my suit. She worked her magic well again at ECOpack, and if it ain't broke....

Oh, and in the evening it's the Sustain Magazine awards. Shortlisted again. Not too hopeful, but you never know. Wish me luck:)
Posted by Peter at 5:08 pm