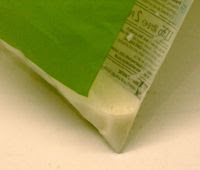 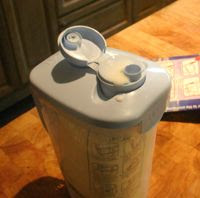 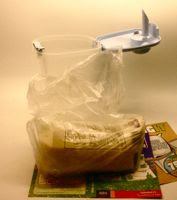 Disclosure: This little effort is going to compete pretty much with my RE:tie idea. Not directly, but with the caps used on many milk bottles. So it is hard to be totally objective in seeking its success. Looking on the bright side, it may make the cap & bottle guys find some merit in a device that not only promotes reuse, but gives their products an edge, too. Just sayin'

Update - a few very interesting comments has made it worth reposting since the 24/05/10 first publication.

As part of a greening initiative, supermarket Sainsbury's have put on a push to promote the use of these milk pouches in the JUGit

They have seen some success. Interestingly another retailer, Waitrose, has not. An odd difference in light of their demographics, which I would have pegged as pretty similar.

Buying is no problem, though there is a trust factor in carrying it in your basket and or bag home. They claim it can be dropped and not burst, but I was more concerned with being pierced. As were a few others. Hence, ironically, all of us asked for a plastic bag to put it in in case it leaked onto our eco-reuse bags.

Oh, and you'd better like semi-skimmed, at least for now. At least it is..'green'

Once home, set up was a breeze. Simple, neat design.

However, it is not so neat in terms of fridge footprint. Where the bottles stand high and fit neatly. the jug sucks up space.

It's about waste, right?

Well, I am biased. I don't throw milk jugs away. I reuse them. And if they do end up in the bin, in this neighbourhood they get recycled. But I do concede that, where this does not happen, a bag is a lot less plastic than a bottle.

Thing is there are also the contents. Now here I can put hand on heart and say I am not convinced. With my lovely 13-year old assistant to set up as I shot the pix, the initial spout pierce sent a gollup up into the pouring ring. This was impossible to rescue easily and ended up missing the cup. The rest of the bag drained fine, but there was some left over due to the spout pierce design. Now, you can get at this, but it is fiddly. With a bottle you get it all... easily.

Also not too impressed by the different but near identical instruction sheets supplied; one from maker and one from retailer. I'd say a single combo might have been more 'on message'.

So... not too convinced, TBH, on almost all counts bar the raw materials one.

So it will be interesting to see how it gets received elsewhere.

At least I now have a nice new jug. That is pretty much useless for any other function.

Seduced by the offer (frankly, I think they might need to offer more savings for longer, as the deal is not too great), I have just made a complete horlicks of the next one, thanks to not having my spex on.

I put the bag in upside down. Not sure this made much difference to the now familiar fountain that went everywhere on piercing, but it certainly doesn't work on the pouring. Most ended up in the jug and coming out the edge rather than the spout. Now all, ironically, decanted into a more traditional milk bottle I had handy (well, about 1,000 odd)

Addendum 2 - Tescos trying too now, ironically, the day I get a very sensible comment from a reader. Why have the jug, at least in this form, at all?

Addendum 3 - Have revisited the trade mag piece above, and only now via comments got reminded of ASDA Green Bottle, or Greenbottle (Google, amusingly, tries to correct one to the other, though it seems wrong). Couple of issues here. First up, I'd forgotten all about it. Now, we shop at ASDA rarely (though pop in, like we do with the protagonists Sainsbury's, Waitrose and Tescos already cited), and I don't recall ever seeing it. So, as with all things, how these options are presented are crucial in the whole consumer acceptance mix.

For all the preference expressed for these by the posters, I'd have to say that my feelings on this option are equally mixed. Seems like a more familiar, possibly convenient design, but there are a new set of eco-compromises. In this case, it's less a matter of reduction but almost purely recyclability. And that, again, depends on the facilities provided from retailer to local authority. You pays yer money and take yer chances... even with what's best for the planet.

Addendum 4 - The product manager for JUGIT has taken the trouble to write, and is well worth checking out for his views.
Posted by Peter at 7:31 am

I have seen these jugs in my local Sainsbury's several times, but didn't see the bags of milk!

What struck me was: could you not just cut a hole in the corner of the milk bag and pour it into the jug that way?

And also, is the bag recyclable?

What a good, simple set of questions. Rather puts the over-complicated designer in me to shame.

I can see no reason not to do what you say. However, it won't work with the jug in question; it's simply not suitable.

The bag IS recyclable, but only at a larger Sainsburys; make of that what you will.

read your comments with interest, I'm the Product Manager responsible for JUGIT and milk bags.
I'll not leave my e-mail address in the reply but will try to respond to some of the points you raise.
Using JUGIT - we've tried most things, the latest instruction is a video on the website www.jugit.co.uk.
The competitive offer, we are trying to make the lowest cost least packaging option a reality, in many countries there are not poly bottles, they are too expensive as time progresses. Alternatives like greenbottle are actually more expensive than current plastic bottle and have a mixed packaging solution which is always difficult to implement.
If you'd like to get in touch that would be great, your feedback has been very instructive, you can leave feedback on the JUGIT website.
Regards
John

Many thanks for your response.

And for your fair-minded attitude to my review. I stress that it is based on purely personal experience and a bit of professional enviro appreciation and new product launch phobia with my own eco innovation.

What's undoubted is you are getting a fair crack of the whip in terms of testing. 3 of the major retailers is no mean feat. We'll see how it works out. Waitrose seems to have backed away, Tescos obviously see merit enough to try, and Sainsbury's pretty committed. That said, after the flurry of the launch, in our local... nothing. The jug promo standees all gone and bags tucked away near invisible.

Looking back at the article, I see some more definitive opinions, and some promo for the Greenbottle. Again, another I had heard of at launch in the trades but frankly never saw since. Yet again the level of advertising and PoP as support must play a part. With some experience I am often surprised that brand and/or retail marketers seem to view new designs in isolation too often just on technical merit, and not as part of a total presentation programme to the consumer. Our RE:tie won't do much if incorporated but not promoted. And it surprises me how that connection is often poorly made in marketing departments.

In the 're'-hierarchy, I'd say JUGIT is most likely closest to reduction. After the initial jug purchase, all that is left is the pouch. Can't see Greenbottle being much more than pure recycling, and hence a variation on the opaque plastic bottles. Which then goes back to what recycling facilities there are locally, and their enviROI efficiencies. Even the pouch seems to depend on what exists, and I do wonder who is going to do more with a wet, sticky bag than consign to the bin, frankly.

I am under no illusions that reuse is the junior partner, eco-wise, between reduction and recycling, simply in terms of tonnages. But I remain committed to the potential of what can happen with a proper commitment to designed-in concepts complemented by proper local community coordination.

We're all trying our best. I wish you and your company well.

But it isn't easy. And as we are all finding, beyond the commissioners at brands, the consumer can be pretty fickle and hard to convince, especially with attempts at radical changes of behaviour.