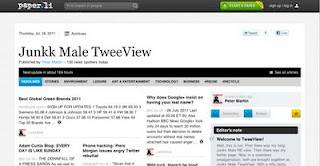 And, at present I have zero idea how I did that.

I know what it is meant to be.

I vaguely remember toying with a a few buttons on the host site.

But how the heck this epic got produced... beats me.

There appear to be topic headings I chose, and most seem pretty OK.

However it's also clear a bunch of things are getting hoovered in according to basic default settings I have never seen before.

So, Dr. Frankstein gets jiggy with Dr. Jekyll.

So long as it doesn't drop me in it, fine. Seems OK so far.

But have to say that a magazine with a bot as an editor is freaky.

One day I'll remember the passwords and figure out how to get in the back end, much less actually figure out what the thing is up to.

Still, in the absence of a Junkk Newsletter for half a year, I'll live with it for now.
Posted by Peter at 5:11 pm