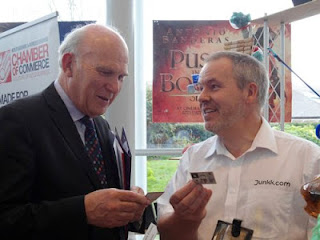 Caption: Dr. Cable clearly surprised, if not tongue-tied, by what he has been shown by Junkk.com JunkkMale... me...  of our cable-tie from bottle cap reuse concept, ‘The RE:tie’

But he and I thought it funny.

The 'he' in question being Cabinet Business Secretary Dr. Vince Cable.

The rest I'll nick from my press release, but suffice to say karma was looking out for me when I lobbed up at a local networking lunch that led to a chat with local chamber representative which in turn lead to a rather nice opportunity being offered by a rather nice bunch....

Dr. Cable toured the Green Expo, and took great interest in the many environmental concepts and businesses being exhibited, being especially complimentary later in the Q&A session, held in a packed out theatre. Replying to a question regarding business support by Junkk.com’s CEO Peter Martin, having seen their ‘RE:tie’ reuse ‘packaging strip into cable tie’ concept, Dr. Cable referred to it with the comment: ‘Brilliant ideas, such as yours’. We are sure the concept’s Cable-tie reuse feature, and brilliance, were in no way associated in the canny politician’s mind when he said that!

Says Junkk.com’s ‘Junkk Male’ CEO, Peter Martin, ‘The Secretary of State’s full remit is ‘Business, Innovation and Skills’. I think he has gained a great appreciation of how much the last two exist in Herefordshire, and in particular our little neck of the woods. As to ‘Business’, well, for us at least, two out of three is a very good start. I’m happy to note Dr. Cable’s positive shared thoughts on helping matchmaking complementary talents to create effective, sustainable, profitable environmental businesses to contribute to the growing UK green economy, at home and abroad’.

The Q&A was quite lengthy, but worthwhile, with Dr. Cable, and Coalition Government policy, challenged on many topical issues and concerns. Dr. Cable replied at length, and in some cases offered reassurance, especially in areas of support for maybe less business-savvy innovators, particularly ‘green-related’ ones, referring to possible help on mentoring via BIS Local Innovation Centres and Local Enterprise partnerships: ‘supporting areas as much as things’.

Ross-based Junkk.com is now no stranger to the House of Commons and its inhabitants, being presented there recently with a coveted 'Green Apple Award' for the RE:tie, adding to an already well stocked international collection for reuse ideas under the Junkk innovation and design banner.

Concludes Mr. Martin: ‘Going greener need not be nag or nanny; it can be truly rewarding, in £ terms too, and hence an inspiration to all. Dr. Cable’s encouragement and.. who knows… something more tangible in support terms later is great, but just as nice for me was young visitor Lucy who spent a long while asking about everything at the stand, and left saying it was all ‘awesome’ and she would tell all her friends. For a social media-based concept like Junkk.com, that… is gold… or should I say ‘greendust’!’

On balance, a good time was had by all. Now, if this doesn't lead to hooking up with some money making experts... what the heck will?

brilliant!! i really hope you get this project on the go!!