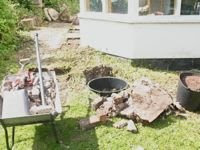 A wee while ago I had a press release on this item, leading to my taking an interest.

Well, I am glad to say it has now arrived to test, and this will form the start of an ongoing review. 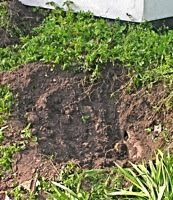 in anything bar sunshine) this weekend it will get installed.

Speaking of sunshine, having read the instructions this presents a slight complication, in that the unit needs to be in a location that gets as much sun as possible. Fair enough technically (I'll share the way it works later), but the way the sun arcs over my garden this limits options. And as I pop out now to have a gander and a ponder, I am going to have to weigh a few issues.

Despite assurances on the safety of the results on the decomposition going into the ground, outside protection in from animals and inside out from flies, it would really be preferred by all in the family further away from the main home (the composters are all at the end of the garden under/behind some trees... not an option here now. Which is a pity as that would make the 'top-up' runs more convenient).

There's also the not small matter of the image it presents, especially as the sunny bits tend to be in view of where we look more often. It's not small (you can get a sense of size as it sits next to its box from the small boy peeking out - at least my sons proved the adage about packaging... and found a second use!), but not ugly.

The trick will be to find that combination of distance, exposure, suitable ground (that's a fair hole to dig, and it needs good drainage below) and screening.

Let me pop the next heading here and I'll report soon. With more pictures!

Not a great start. Having scouted the optimal sunlight location, it is pretty much going to be at the SW corner of the house. OK, maybe we can live with that. So I start excavating away. Now this baby needs to sit in a fairly deep hole to do its job and not let in the nasties, so the spade is flying. Crunch! I have now discovered the drainage pipe from the downpipes on the South wall, which joins the sewer line I know runs across from a manhole to another manhole at right angles across the back of the house. Unfortunately I have broken the pipe with my spade. Junkk.com to the rescue! A patch will be made and affixed. So.. a learning tip: before digging a hole try and know what's down there (not that I could). Trouble is, I don't think this location will now do. Problem is... where else? I fear the next option will be good for about 3 hrs sunlight tops... on a good day.

Learn more about the related issues to do with composting here. I should point to the cautions on fungal spores that have been raised. In checking with Green Cone, the rather curt reply was that it 'should not be a problem'.

Just had an interesting conversation with the Green Cone Co's new PR lady, and this has reminded me to update this re:view.

In the end I decided to stay with the location I'd found, as it is really the only point with a fair chance of sunlight, which seems pretty key to the decomposition process.

Speaking of which, we got chatting on this aspect. If there is a chicken carcase in there, that is really no different to burying a corpse surely? And it's not 6' down. Perhaps not an issue in a country garden (albeit near the house... too near for the missus) with some acres to 'absorb' the soup (too much CSI), but I do wonder if there is a minimum volume required to handle the resulting waste via the basket.

I say volume because on top of area there is depth, and from this we got on to a smaller version, and if it could be used on a rooftop planter in a city flat, for instance. I know there are hibachis (or is that a BBQ grill?) that seem OK, so maybe.

She has promised to come back with a few answers, including my ongoing concern on fungal spores, and I'll update as and when.