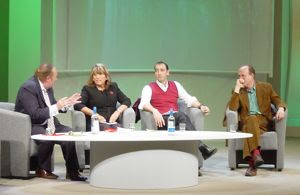 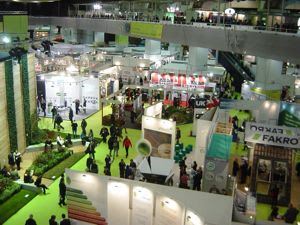 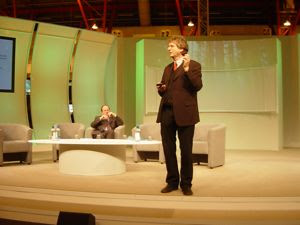 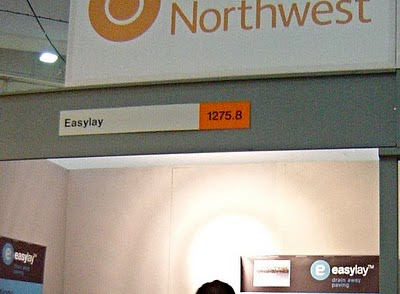 Junkk/RE:tie, while praised for getting as far as the shortlist against stiff competition (Veolia, for one apparently. Hey, little victories), sadly did not win in the Sustain Awards.

But it was a good, good natured (some of the awards created hoots) evening, and I did meet some nice folk.

It also gave me an excuse to be at other stuff in London, such as ECObuild. For two days, indeed, as I was further combo'ing the transport opps by hitching a ride home from my missus, who had driven in the next evening for a gig.

[Pause] - I started drafting this pretty soon after returning, and have 'dipped in' from time to time thereafter as time permitted.

In so doing, at almost a week later I have to say it is less and less a RE:view of an event and more and more a pondering of issues.

In that I credit the show with great value in some areas (at least, as regards my major personal interests) though, as will be gathered, may raise some eyebrows that as a source of any great new ideas across the board, I found it sadly lacking.

Now I fully appreciate that as one perhaps more immersed in matters green and 'innovative' (that dreaded term again) than some, I may well be proving trickier to please or am simply jaded now, but really, little at the stands did much to float my boat.

Heaven knows I tried. I was there for two days. And in that time I think I covered it all. Hard to tell as the aisle arrangements were not conducive to knowing where you were are going, and hence I may well have missed chunks. Also I think the lack of 'zones' was mistake.

It was VAST. And for some, with limited time, I think it may have helped to target areas and blitz. The brochure also gave you little lead on who did what save or a name (major support for 'does what it says on the company banner' guys (look who is talking)!).

All I know was that it just seemed to blur in endless guys flogging tiles, wood floors, various renewables and the odd gizmo. And while I can see a high % might have floated the boat of a trade or industry visitor, it honestly felt pretty challenging to any but the most dedicated, interested member of the public. Can't speak for all eco-families, but mine would have lasted 15 minutes. Maybe that wasn't their target, possibly confirmed by it running mid-week. But it seems a shame there was not much there to excite and inspire a broader audience, evidenced by me not noticing much media coverage during or after. Again, maybe it will all be in the trades. There was also the frustrating matter that there were talks overlapping talks that no one person could hope to cover. I just see in my notes that I missed one on Plan A from an M&S speaker... cloning tech needed!

So, having passed by (and here in RE:view mostly over all of the several hundred outfits who forked out a few thousand for 3 days' exposure of their wares), what did keep me there for two days?

Well, it was the 'big issue' seminars, actually all confined to the arena.

There were some heavy hitters there, on big subjects which, ironically, as time progressed highlighted more and more disconnects between what they were saying, and they and all around were doing. Time and time again my core debating interests, namely enviROI & MESSAGE vs. MESSENGERS, were piqued.

Having availed myself of the finest, cheapest, greenest travel options, I arrived at lunchtime on the first day just in time to miss half of 'Selling the 'S' Word: the role of the media', hosted by Andrew Neil within panellists Eve Pollard, Alastair McGowan and Peter Bazalgette, representing an interesting mix.

And very much grist to my mill. Mr. Neil was in combative form. The others were more nuanced. I think safe to say most were pretty pro-green. Mr. McGowan perhaps the most committed, with a few "'we' must's" that had Mr. Neil pouncing a few times for presuming to know better and speak for others. Mostly worryingly, once erring down a 'people might have to be forced' route which fortunately did not progress far and hence flare. Actually, for a celeb he was pretty up to speed, and I very much respect him (as I do anyone who shares the trait) for saying 'I don't know' rather than blustering.

Speaking of Mr. Neil, I popped in a point on how the media does seem to prefer its debates polarised, though most did not seem to share my views.

I fear I still do feel this to be the case. Take this as an example that happened right on top of it all:

This rather neatly segues into enviROI aspects of eco taken from big picture 't'is/t'isn't debates (endless ones) about CC/AGW/etc, to rather more down to earth-saving tangibles. The bits and bobs proudly on display all about us.

But it's all well getting all excited about green, but it does rather have to deliver, tangibly, or it is really just so much hype-driven, bandwagon-jumping extra hot air.

Hence I was very pleased to have stayed over and caught the lecture by Prof. Michael Braungart, based on his global best-selling co-authored concept/book: 'Cradle-to-Cradle: Re-thinking the way we make things'.

You can see why that had an appeal.

He's a fun guy (in a laconic way), and a great speaker. Maybe the two are related?

He was also more than happy to stir things up.

I think his first 'fact' (there is a point to be made that allowing such folk sole control of the turf - though there was a Q&A - might lead to a danger of 'he who has the mike is in the right'. His conviction, and powers of oratory were hard to resist in taking all shared as done and dusted): Use an elevator - it's 5 x better than walking. Something to do with our CO2 exhalations vs. mechanical advantages. If true, it's a nifty one to store away making a point on enviROI.

Less hard to argue with, at least as his opinion, and one I share, is that the UK is obsessed with blaming and shaming.

The human aspect is one he came back to often. Frankly he stated it's better that 'one' is not here at all. But as we are he then went on to challenge the notion of 'Carbon neutral', claims of which surrounded the arena, vs. 'Carbon positive', which he seemed less impressed was much on display.

He was also, I felt, at times quiet presumptuous in his idealism:'Why,' he thundered, ' didn't we demand to get rid of the carpets?!' Turns out they are very much kicking out toxic fumes on top of being pretty one-shot non-eco. Well... I did! Years ago! Waaaaay back at my abortive month as the near sole green stand at the supposed 'green' Ideal Home.

As his gaze, and pointed finger swept the hall, I do suspect some exhibitors were very much hoping the person they were selling to was not pondering the more complex issues that lay behind their desire to make an 'eco' purchase.

As I say, little there really piqued my interest, even without delving deeper into the actually numbers. But nail me down and ask what was for me the most interesting 'thing' there: ecosheet Just ticked a lot of boxes for me. About the same price as plywood. About the same weight. Only waterproof. Not sure on its woodworking characteristics but will try and find out. Thing is, as with so many good 'new' ideas, despite my not really seeing a downside (OK, have not checked its enviROI either), why do I doubt my local Travis Perkins will have a clue what I'm on about or be able to get it? Because I have many home projects where having a supply of these around would be well handy... if really eco. Addendum: reviewed here

In all this, there is of course a danger of pitting the 'evil' of capitalism vs. those noble traits that might be stood 'against it: ethics, morals, etc. They of course need not be mutually exclusive. But what is interesting is how often things do get discussed in the terms off trade offs such as these, but so often leave out one very human, on the face of it most noble trait of all: compassion.

Nature is not, as a general rule, very compassionate. We humans are, mostly, and as we evolve will get more so. But it's an uneasy split. We are of nature, but by our actions forcing major impositions upon her all the time in the name of more cerebral concept than survival of the fittest. And while unrestricted, consumer-driven growth is pouring a lot up, down and around, it's all complemented by various balances being upset technologically or on compassionate grounds.

I came away very stimulated but, I suspect, not for the reasons it was created as an event or why 99.999% will have come and/or left feeling most satisfied. Certainly I am even more determined to crank an eyebrow at anything being sold, initiative or product, in the name of eco, unless I am sure it has been well tested by those who know what they are doing. Which pretty much excludes most in the media and many self-elected but well-entrenched (and hence shoo-in invitee speaker) eco advocates. Many have niches they are there to promote or defend, and not always manage to convince that their activism is altruistic.

Lurking around before leaving I caught one seminar with another solo speaker, entitled 'Politicans going green make me see red'. Well, I can see how that can happen on occasion, but the event seemed mainly a pulpit for him to berate Tesco and various powers that be from wanting to spoil his bucolic village. It could have been an interesting roam around planning rules based on a personal experience, but without the context of one who might have explained why these things happen it all was a bit a rant.

What eventually saw me off was one called 'Politics and environmental responsibility'. Sir Jonathan Porritt was an urbane and effective first speaker, but was followed by a shrill activist who really managed to prove that berating is often a poor way to engage and then persuade. After just a few minutes of her reading from an iBook manifesto I was off.

Caption: Final pic. Highly descriptive, and no doubt accurate, but I have to say that I was very pleased not to have the two young teens with me when passing this stand.