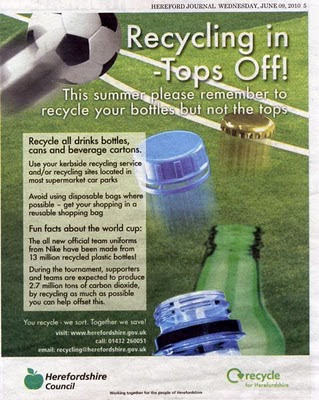 Interesting ad(s - there was a 1/4p and a full page version in the same paper... an odd media buy, though the former did help my scanning:) in the local news.

And, possibly, another feather in the RE:tie pitching cap?

Seems that recycling is pretty flavour of the month, but certain aspects are not, namely caps.

Now reuse is a much more embracing concept than recycling anyway, and of of course here at Junkk Towers we have several thousands of caps we have not added to the waste stream as reuses are being sought.

But in terms of getting the public mindset on board, surely a re-design that actually encourages retention and reuse of things the authorities seek to avoid in the bin/landfill... to be encouraged?