Good job it has been a horrible weekend's weather.

Because 'working', indoors, over a nice weekend does not float my boat.

And that was, indeed my main task Friday, Saturday and Sunday at the Cheltenham Design Festival.

Now in sharing my thoughts here (heads up, it was a long set, so the screed is too), I should stress they are not based on the totality of the event, which was eclectic, covering anything from the philosophical to the educational to the down and gloriously dirty.

Though actually very reasonably-priced at £30, the all day tickets were not really in my budget range, given where my professional interests lie (personally, jet planes and race cars were also right up there, but a price too far).

I restricted myself to those which, as billed, seemed to offer most promise to my Junkk/RE:tie endeavours, with one extra for the 'ad man' in me (of which more, in a sad way) later.

Friday I chose two, frustratingly at either end of the day, as the venue (while very nice) had little to occupy one outside the seminars. 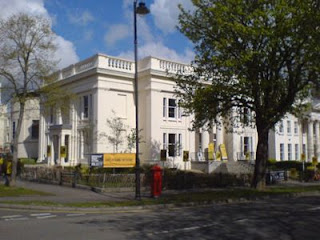 First up was 'Colossal Issues, Simple Solutions', with Simon Kavanagh of KaosPilot.

I was seduced by the blurb, which inferred 'saving the world'. There were a few elements but it was more on design education and, whilst interesting, really not too helpful for me. For the large student contingent, maybe, as at least he seemed to appreciate the role of earning a living whilst designing. One thing he did do, which was good, was take time out to get the audience to write out a project we had not yet moved on with, and then turn to explain it to the person next to you, with reasons why not and how that will change. It was effective and good fun. Sadly, bar one pulled out to share, this was not amplified upon.

Mine, for posterity was: "To create a range of consumer packaging that can be reused to solve the problems of the potable water collection and storage in 3rd world environments with no or poor systems to do so". On a back burner, but bubbling still.

In the evening was a Q&A on the them of 'Is There A Future For Design?', which was meant to feature Sir John Sorrell but he was ill so covered by Chairman Stephen Marston, Chancellor of UoGloucs. Interesting chap bearing in mind my current  efforts on talent/business matchmaking as his career as a CivSev also embraced time with the Department of Business, Innovation and Skills, on top of overseeing educating creative talent to integrate into the workforce.

Steven Kavanagh was also on the panel, along with two 'seen it, done it' cynical old, bearded blokes (probably younger than me), the local MP and a woman from the outfit who, I think, designed the Olympics logo. Can't see she inspired much later on, either.

For a Q&A session not many got asked and few, IMO, answered very sensibly. There had been a request made to pose questions in advance by Twitter, and I had duly obliged. One of mine was the only one of these read out, and out of context to cover another point. Disappointing. 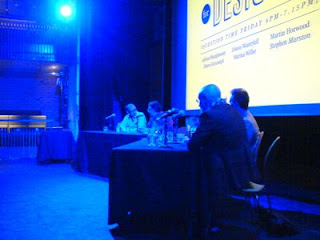 Well, while it jogged along as far as it went, it didn't go very far. A few rather 'loose' scary claims on climate to kick off, which I thought were unnecessary (not to mention of questionable accuracy) in light of the triple bottom line benefits of the actual concepts being pitched.

I cannot see, for example, any issue with promoting the BaleHaus where practical as an option.

I was also struck by a quote attributed to Prescott Alan: 'There is no country, place or people that can be sustainable'.

There were not many opportunities for Q&As and exchanges, and on closing the panel went into a protective huddle. I had a few.  One did get, sort of, answered. But there was a silly lady who was hot under collar that a reused pencil still produced shavings, which were wasted, missing that one more use is still a reuse and double the benefits.

In fact, this propensity to huddle up with your mates and bale stage right meant I decided to forgo the evening keynote from John Hegarty. Somewhat of an iconic figure in the ad world, he had extra meaning as he once hosted a workshop that inspired young creatives like me. Then, years later, he hired an art director that I had discovered at a Singapore College and trained up at my agency. I am sure what he had to say was going to be, and indeed was awesome, but this really was not enough for me to wait several hours for to be talked at and then see him scoot out a side door and away. I donated my ticket (the most expensive of the weekend) to a needy student.

Sunday was just one: 'From Garden Shed to Dragons' Den' by Mark Champkins, amongst other things Inventor In Residence at the Science Museum.

This redeemed some of the disappointments a fair old way. He was funny, interesting, and hung back to chat.

And a prodigious inventor taboot.

Kicking off at college with 'self-heating crockery' he also opened a few eyes on 'Dragon's Den'. From some others I knew most of the horrors of TV ratings over actual discovery or reality, but he added a few further reasons why this is one show to keep a bargepole away unless it can be totally 'managed'. Which, given it is post-shoot edited, seems a near impossibility.

He then got into process issues, with examples/tips, and this was both interesting and useful.

And he made it very 'real' and personal, with great anecdotes. As one cursed with the monkey on my back of loving to create but ever aware of the imposition of new ways to add 'stuff' to the consumer stream, I was intrigued that Jamie Lee Curtis patented a disposable nappy concept, but mandated it not be marketed until proper disposal technology had been invented to deal with it.

Would I go back? Hard to say. The value of these events.. to me at least... is in the interchanges and networking. The best part was the Friday evening, at an event post-festival by an RDA-sponsored local group where I met possible synergistic partners in design, eco, and music.

Design is such a nebulous construct. There's what it was, what it is and concerns on what it might become. Less of a priority in some cases at this event was what it needed to be, good or compromised. Too often, to cheers from the gallery, some speakers (whose designer spex went not to savers for a service) would chant some 'right on' populist slogan, and the assembled BMW drivership of that urban jungle that is the leafy boulevards of Cheltenham, or their iPhone-adorned progeny, would roar in approval.

One speaker even made play of the 'new breed' of student who were only interested in 'doing good'. Nope... I recall this was pretty much the deal in the 70's too, Bub. And while I am a living example of that aspiration, those frames and SUVs do not get sustained from thin air.

People have to 'buy' the design, in all senses of the word.  Like my definition of an entrepreneur as a person with an idea that has actually sold, so design is but a doodle unless a market embraces it.

Despite the intimate surroundings of even The Studio, one venue used beyond the very nice Theatre, the overall sense was to me more one of 'broadcast only'. Yes, after the pontification or pitch that was the lecture there was usually a Q&A, but these were tightly controlled and limited.

Such events do seem to be catching on, and if the ROI (time and money) is sound, that is a good thing. I share this http://www.clerkenwelldesignweek.com/ merely because it arrived at my in-box just now. It also appears to be free. Unsure what the content is, and there seems a fair bit of 'show to sell' vs. interactive discussion, but it may be worth a gander. Pays yer money and all that...

Thing is, even if 'free', the investment in getting there and hanging around can carry a huge cost too.

But like that ever-elusive seam of gold I dig towards, you won't strike it unless you are there swinging the pick.
Posted by Peter at 2:47 pm

Reading about another great festival in Cheltenham is always great. It benefits Cheltenham hotels.

In approving that, I really hope there was a human involved at some point. At least it was sort of in keeping with the topic. And the hotel the reception was held in was very nice.

Don't worry there was a human involved! Thanks for the approval.